SHK 30 also known as HCG 69 is a group of galaxies in southwestern Pisces. In the HGC it consists of 5 galaxies, A through E. In the SHK list those are 1-5 respectively. But it goes on with 6 through 11 and A through D for 15 galaxies. While all of the HCG galaxies and thus the SHK 1-6 galaxies are about 270 million light-years distant that isn\'t true of some of the other SHK galaxies. C, for instance, is listed at over 3 billion light-years. Others have no redshift data at NED. The most interesting of these is B which is an obviously disrupted galaxy of some sort. In my image, it appears to be two galaxies but high-resolution images show it to be one disrupted galaxy. The star at the southern end makes it appear comet-like further confusing things. I wish I could find something on it but I can\'t. Its blue color differs greatly from the other members. That may just be due to star formation caused by the disruption.

Another odd galaxy is NSA 152639. Its distance indicates it could be a group member. In my image, it too is somewhat comet-like with a head at the south end. At first, I suspected it and B might have tangled in the past. But high-resolution images of it show it a double galaxy. The NED position points between the two, a bit closer to the eastern member. It is larger and has an off-center core causing the \"comet\" head. So it may be an interacting pair of dwarf galaxies.

The two PGC galaxies to the southeast have redshifts that indicate they too could be members of the group, just too far removed to make either compact group catalog.

My system imaged this one on a very poor night. So poor it retook one green and both blue frames. Once I saw the data I realized all data from the first night needed to be retaken but by then it was too far west. Why my system accepted such poor data I don\'t know. When I ran it through the filter all was rejected but it only three color frames were rejected that night, yet it\'s the same filter. This isn\'t the first time that\'s happened but I thought I knew the problem and corrected it. Apparently not. The red data was one third the strength of the retaken blue and green and due to clouds, the stars were much smaller. This made reconstructing the color difficult. Even eXcalibrator couldn\'t help much. Color is mostly adjusted to what I am guessing it should be. The luminance data too, is very weak and very noisy, falling a good 2 magnitudes short of normal. A lot of fainter features of these galaxies is lost.

All 5 HGC members are in the IC catalog. They were discovered by Edward Barnard sometime in 1889. His records are too incomplete to pin it down further. 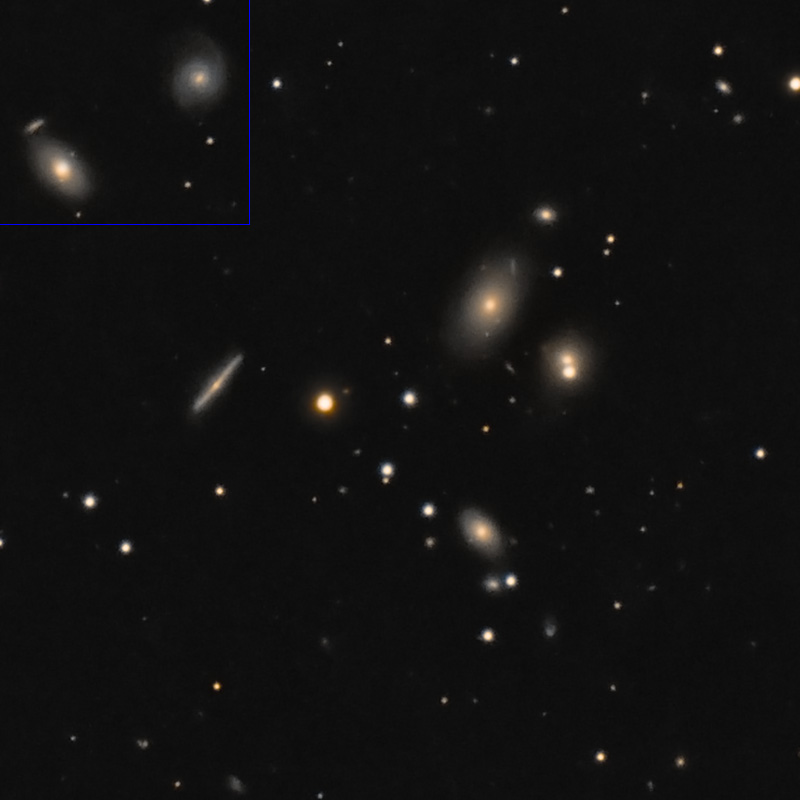 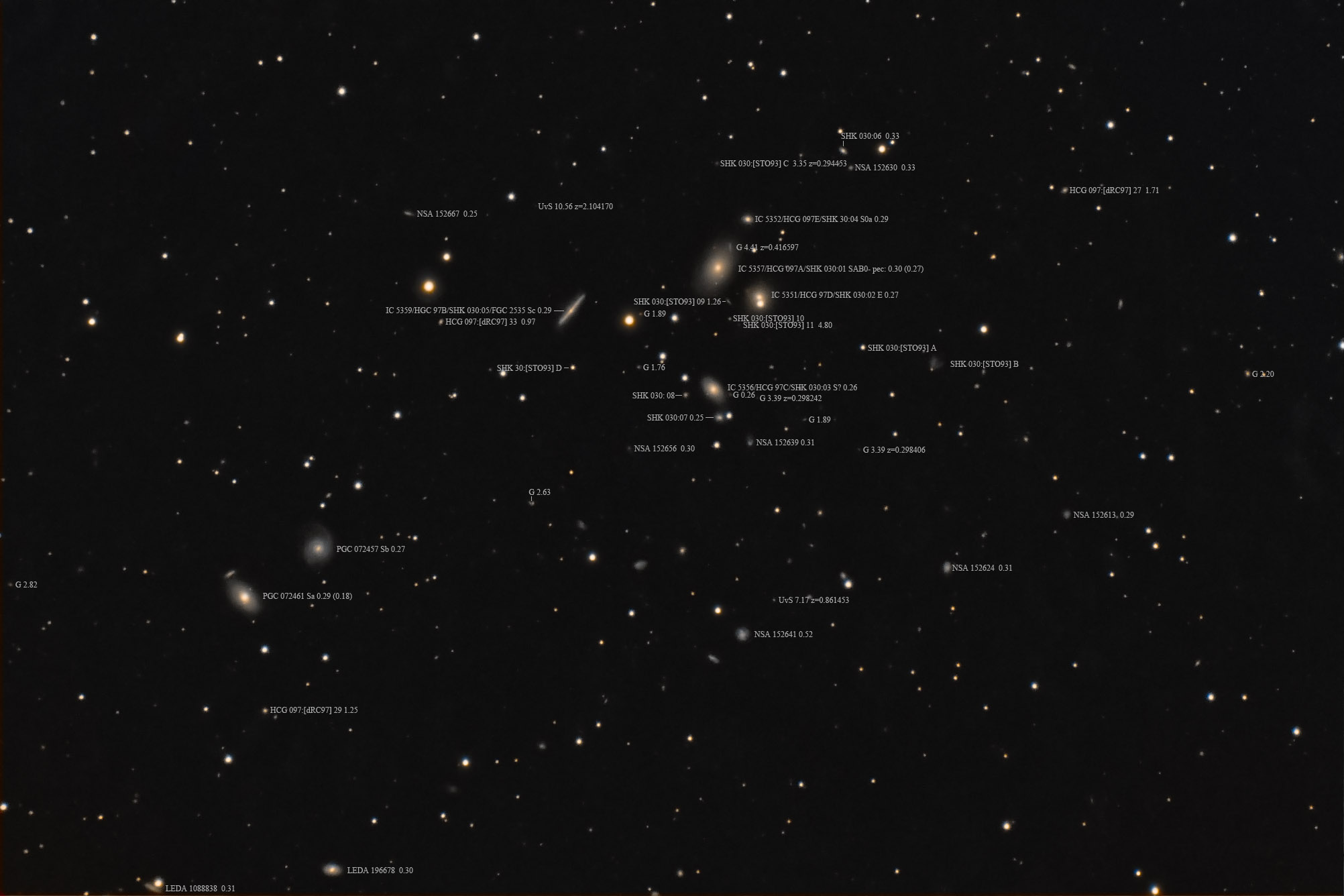 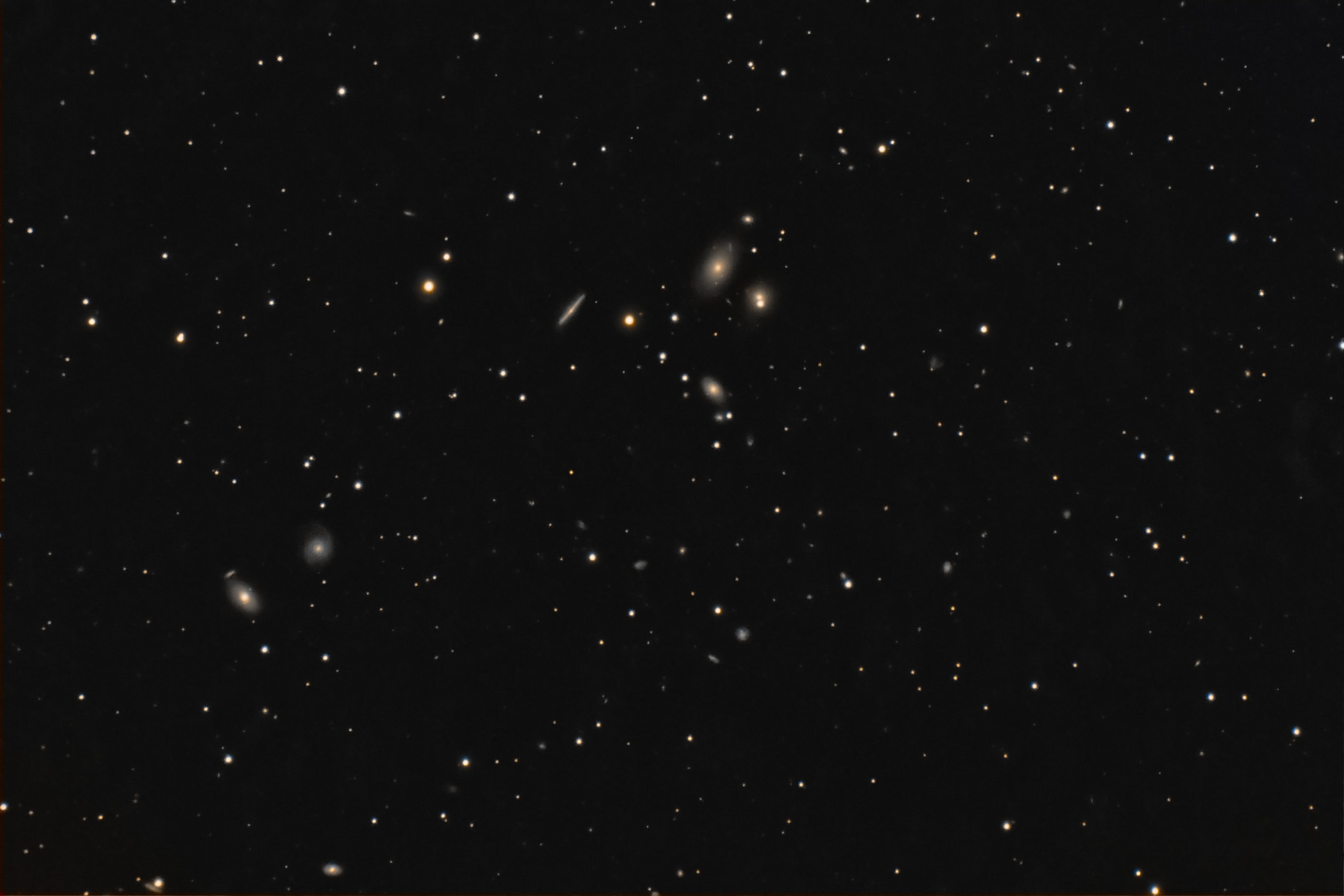