Trumpler 5 is an open cluster in Monoceros about 10,000 light-years away. It is a bit over a degree west of the Cone Nebula so often seen in a wide field image of it yet few note its presence. While most clusters are composed of bright blue stars this one is full of dim yellow, orange and red ones. This is because most clusters are young as they soon get torn apart by tidal forces of our galaxy. Some, however, are dense enough, far removed from tidal forces or both and get to live on and on. M67 is a commonly cited example. Trumpler 5 is another. According to WEBDA, it is some 4 billion years old. Thus all the bright blue stars have since lived and died leaving only the smaller dimmer stars we see today. Since it is located in the winter Milky Way we see it through a lot of stars, some of which are young blue ones. This provides the sprinkling of blue stars seen in the cluster.

I wasn\'t going to prepare an annotated image for this one as I found nothing to annotate until I looked into papers on this cluster. Late last year an oddity turned up in this cluster. Lithium is an easily fused element. Normal stars quickly destroy any lithium they might have had. While stars can create it at very low levels it usually is just as quickly destroyed. But several stars in this cluster, and one, in particular, #3416 have unusually high levels of lithium indicating it is being created much more rapidly than usual. It is noted on the annotated image. In looking for it I found I picked up an asteroid. Since the usable green image was taken a different night it appears in the image as a white, red and blue dot moving nearly due north. It is (15761) Schumi at magnitude 17.2. You can see how poor the luminance data was with the blue and red images coming though stronger. The asteroid is moving very slowly, likely at the end of its retrograde loop. But the slow motion is ironic given the naming citation which reads: \"(15761) Schumi = 1992 SM16 German ace Michael (\"Schumi\") Schumacher (b. 1969) is recognized as being among the world\'s best racing drivers. He is the most successful sportsman in the history of Formula 1, multiple World Champion and a record Grand Prix winner.\"

Since I wanted to point out the lithium star and the race driver\'s asteroid I went ahead and marked with a \"G\" the four 2MASS galaxies in the image. There\'s nothing much on them at NED, not even a magnitude. Only one looks the least bit fuzzy, that\'s the one at the very bottom. The other three are impossible to tell from stars visually. Even the PSF of two is the same as a star. I\'ll trust NED the two are galaxies, not stars.

As usual with my conditions this year, the weather nailed me yet again. Out of 20 frames taken I was able to only salvage one with each of the 4 filters. I combined these into a pseudo luminance and used the three RGB frames for color. This is sufficient unless satellites get in the image. And of course, with my luck, the red frame had one and the blue frame had two. One of the blue ones was as bright as the brightest star wrecking havoc where it traveled. With two frames I\'d just substitute that area with the one without the satellite but with all the other blue frames useless I had to resort to processing it out. Fortunately, it passed mostly over red stars so by selectively desaturating only pure blue objects I was able to reduce it to just where it went in front of stars and since it was bright it overrode their color with blue. For those stars, I made a pseudo blue by using the red and green data to guess at the actual blue intensity. Probably more work than it deserved but I think I ended up with about the right star colors over its path. It was that or wait a year and retake it. I hate retakes as so much is still to be taken. Hence the processing battle. At least I doubt you can determine its path. 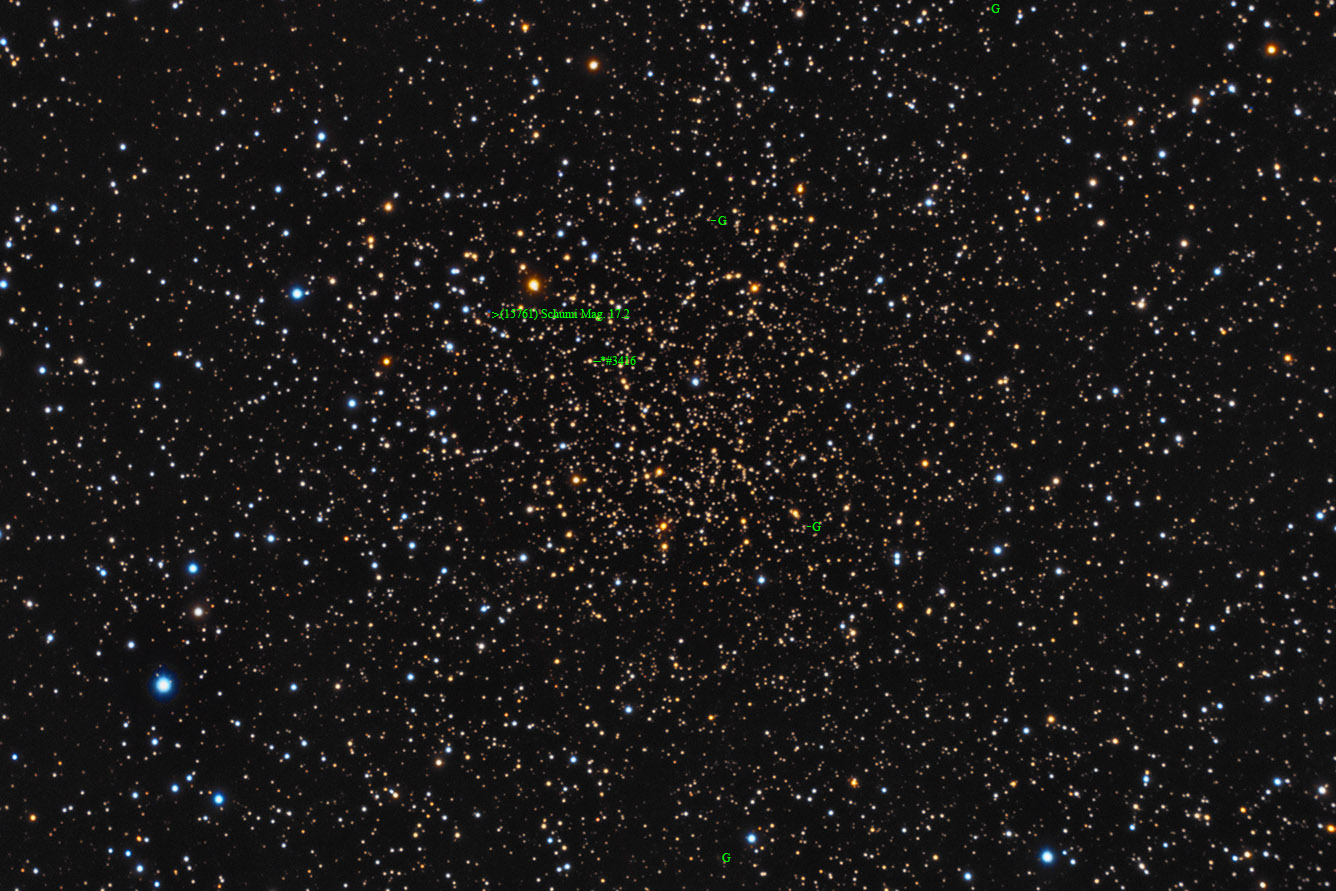 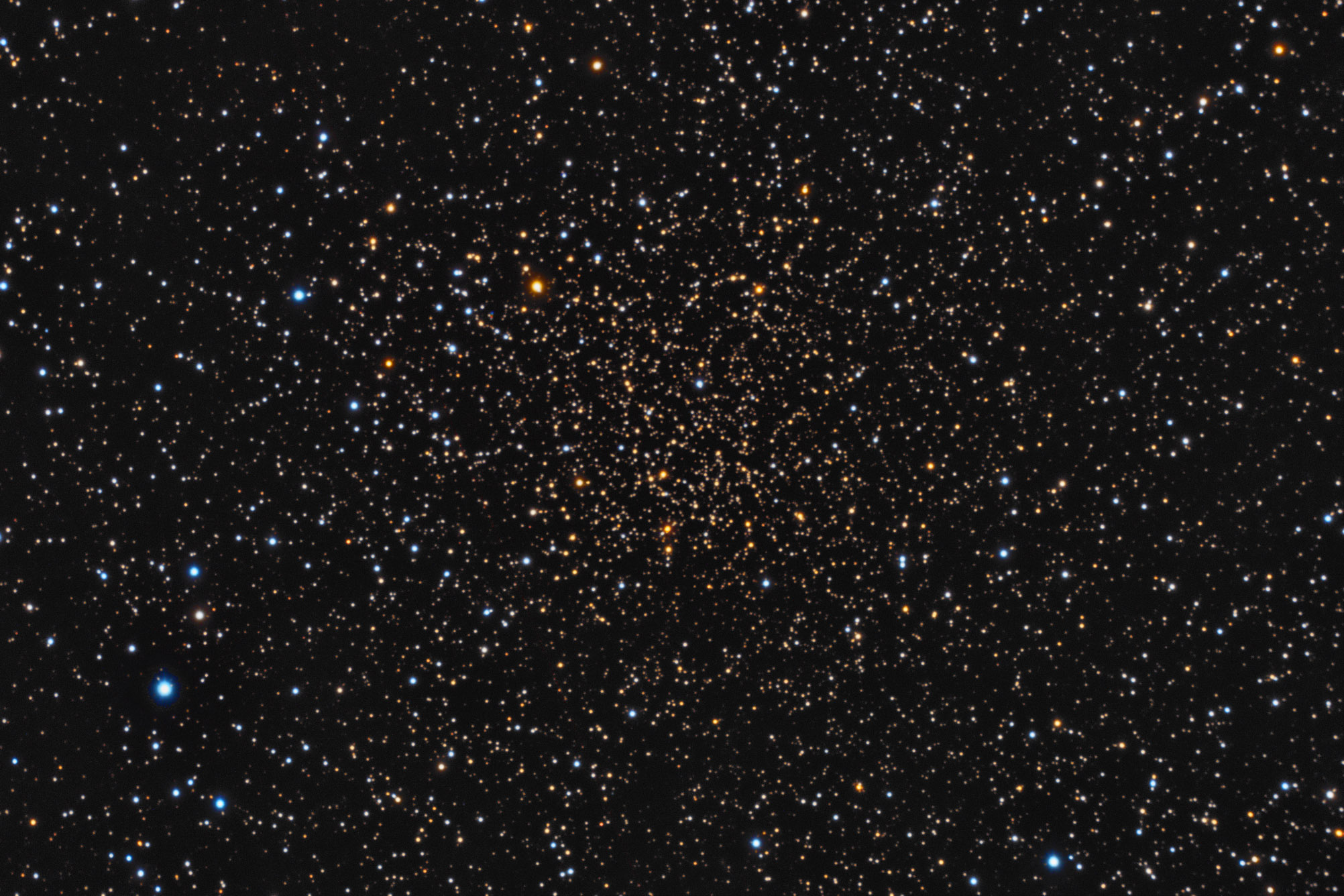