UGC 6 is a merger in progress in the eastern side of the Great Square of Pegasus. It is located about 280 million light-years by redshift and about 330 million light-years by Tully Fisher. The odd loops are likely stars ripped from the merging galaxy and mark its path of doom. I didn\'t realize it also had very faint sprays of stars that arc around it from the northwest to the southwest. They extend some 120,000 light-years from the galaxy\'s core.

At the top of the image is the very blue galaxy UGC 00011 at a redshift distance of 190 million light-years. There is one distance measurement using Cepheid variables listed by NED that is apparently very wrong as it says it is only 160,000 light-years from us which would make it part of the local group, likely a satellite of the Milky Way, and easily resolved into stars. Instead, I see a distant \"sloshed\" galaxy. That\'s one in which the core has been pulled way off center. Usually, this is due to passing by some massive galaxy. In this case, there\'s nothing in the area so I\'m puzzled how it got that way. I found nothing much on the galaxy and certainly nothing addressing this issue. In any case, it is far closer than UGC 6 and thus unrelated to it or its \"companion\" to its southeast.

The \"companion\" is a small spiral at about the same distance as UGC 6, so not related to UGC 11. NED calls it UGC 11 NOTES01. It also carries its own designation in other catalogs. The annotated image uses the LEDA catalog number for it. Of the three galaxies with redshift data, it is the only normal looking one.

Superimposed on it is 2MASX J00033471+2204499 just south of the nucleus. I took it for a star but in the Sloan image, it is very rectangular. That was lost in my much poorer seeing. Other than that it does appear quite starlike even to the Sloan scope. No redshift is given. Its brightness would argue it is closer but that\'s not necessarily the case. Only a couple other galaxies are even listed in NED, none have much information and are known only by their position which is most of their catalog \"name\". 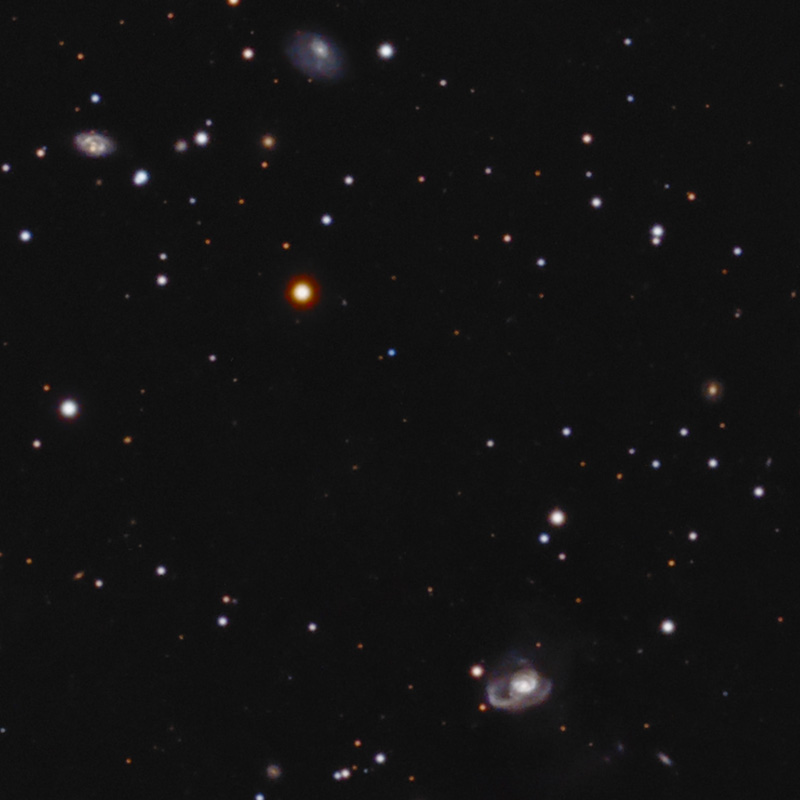 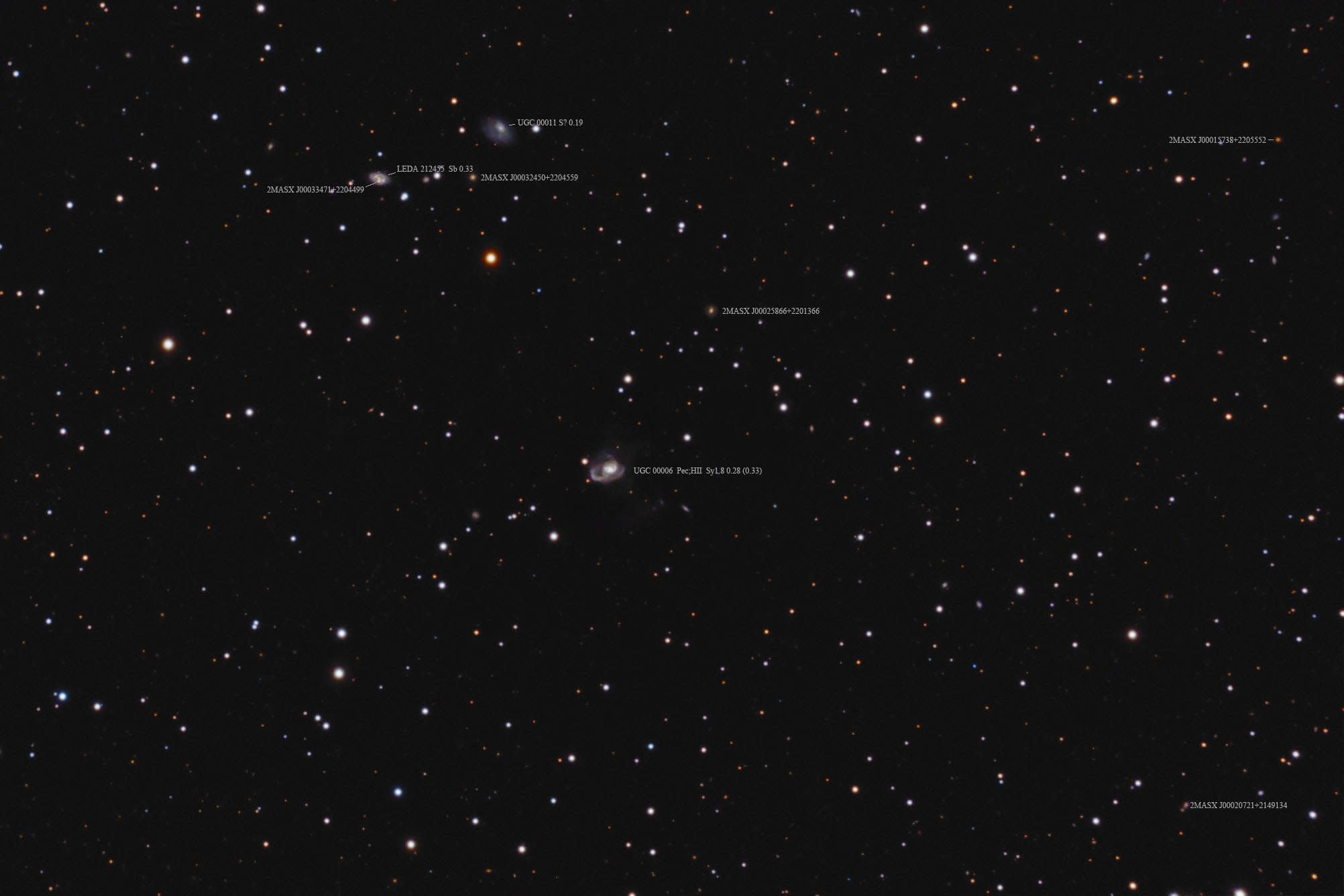 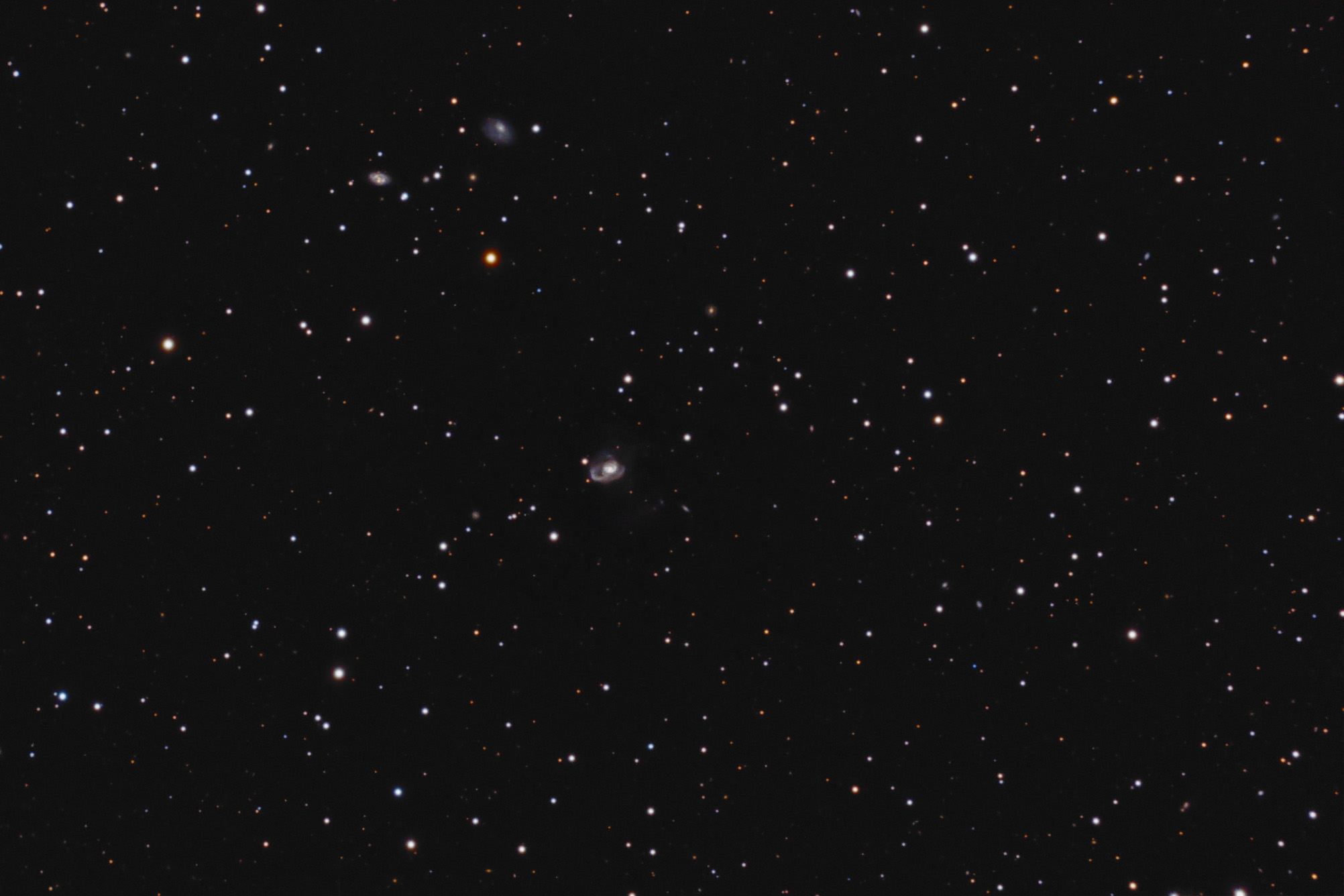