UGC 03974 is a low surface brightness dwarf galaxy in southeastern Gemini. There is much confusion over its distance. Papers seem to all disagree with each other and give reasons why the other guy\'s distance is likely wrong. Redshift puts it about 22 million light-years away. At such close range, redshift is often a poor distance indicator. NED sites 5 estimates using other methods that range from 6.85 to 27.4 million light-years. I\'m inclined to use the more distant estimates even though the distance to M81 is much closer as the closer ones are close enough I should be resolving stars in the galaxy and I can\'t come close to it. Star clusters do look fuzzy indicating it isn\'t really distant but something over 22 million light-years seems reasonable. This galaxy has been imaged by the HST which easily resolves it into stars but does so again at a level common for a distance of about 25 to 30 million light-years from the HST images I\'ve looked at. Papers indicate the galaxy had a starburst level of star formation but that is now over so the really hot, bright stars have died leaving only the dimmer blue stars to give it its blue color. Putting all this together I still vote for the 25 to 30 million light-year value. Assuming it is 27 million light-years distant I measure its long diameter at 316\" of arc which translates to 41,000 light-years. Rather large to be considered a dwarf. Radio observations show a rather large amount of nonionized hydrogen which means it could generate a lot more stars if that gas is cool enough but that doesn\'t seem to be happening.

It does have a companion galaxy, CGCG 087-033, also irregular but much smaller with the same redshift. Unfortunately, it is out of my frame to the southeast. There was no way I could get them into one frame without rotating the camera. It was -35°C the night I took this and without a rotator, there was no way I was going out to the observatory to do that. Even with gloves handling a massive aluminum object the size of the camera and working with the small Allen wrenches needed was impossible for this old guy. I stayed in my chair in front of the fire and said the heck with its companion.

There\'s little information on the extragalactic objects in this part of the sky. Only a quasar and a galaxy cluster had redshift values. I\'d not have prepared an annotated image but there were three asteroids in the image, one 20.9 so very faint. This image combines 6 frames rather than my usual 4. That dims asteroids more than usual so picking one up that faint in a mean stack reduces the brightness of the asteroid against the sky by a factor of 6 rather than 4. The detail on the asteroids is in the annotated image.

Those wanting to know more about this galaxy and its companion can find a lot at this PDF article:
http://core.kmi.open.ac.uk/download/pdf/1636653.pdf Hip waders may be required as it gets a bit deep. It also decides the galaxies are about half as distant as I have which would make it dwarf size.

I\'ve included a false color HST image which is a super quick process of one red frame (606nm) mapped to blue and one rather deep infrared frame (814nm) mapped to red. Since the blue frame picks up the red part of the spectrum including the H alpha line the few H alpha regions in the galaxy show as blue in the HST image. That was the best I could do with only those two frames from the Wide Field Camera to work with. 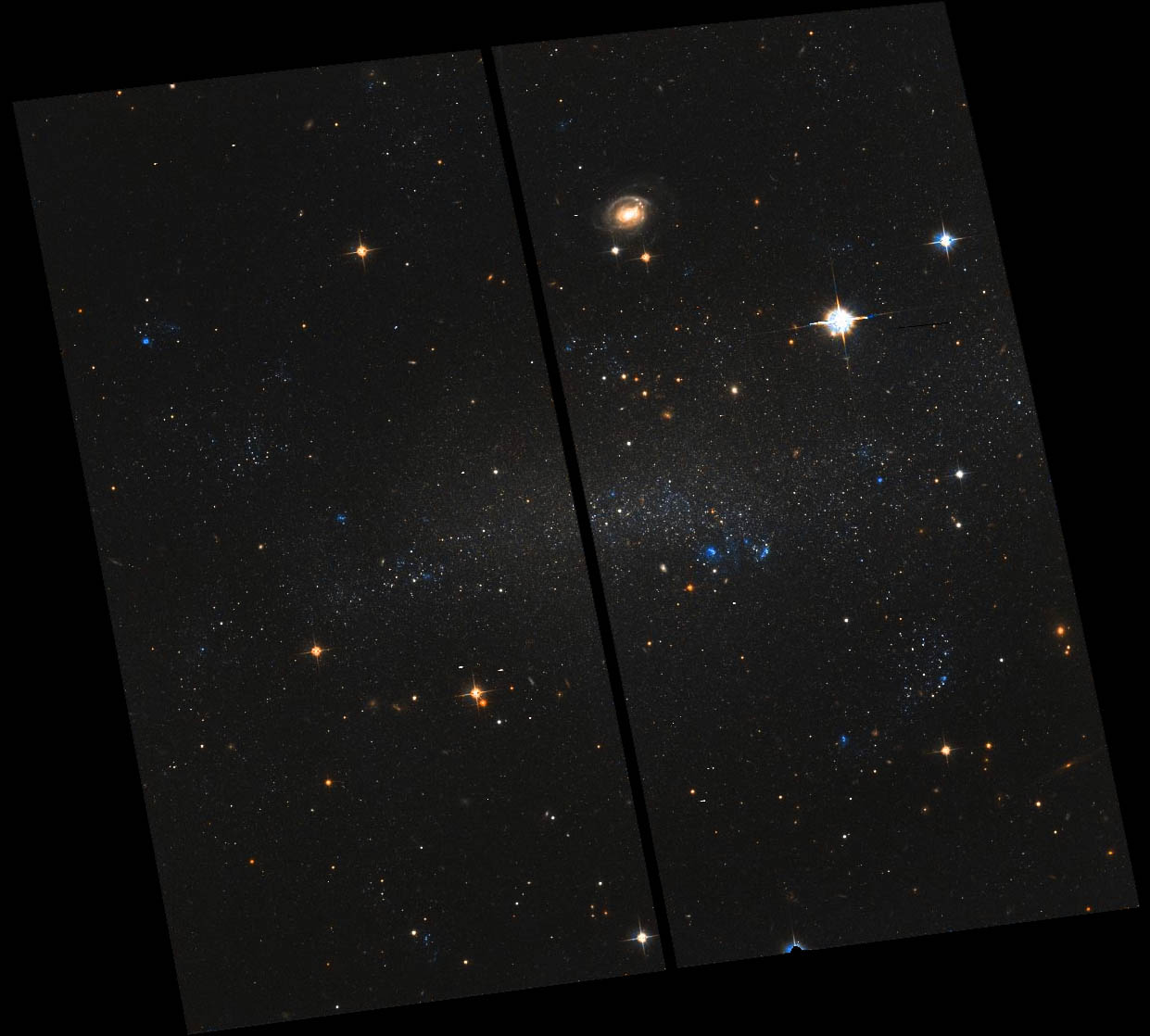 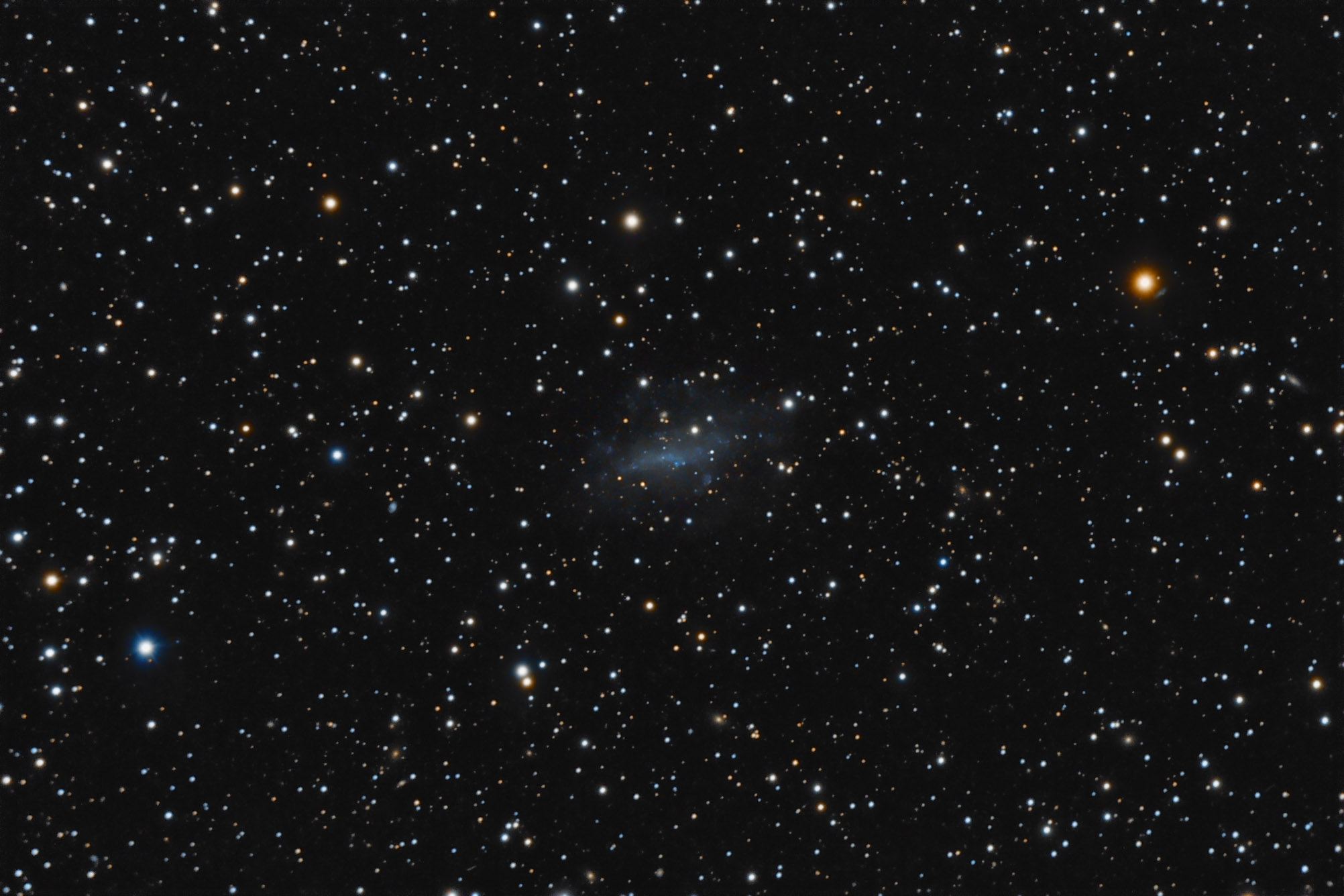 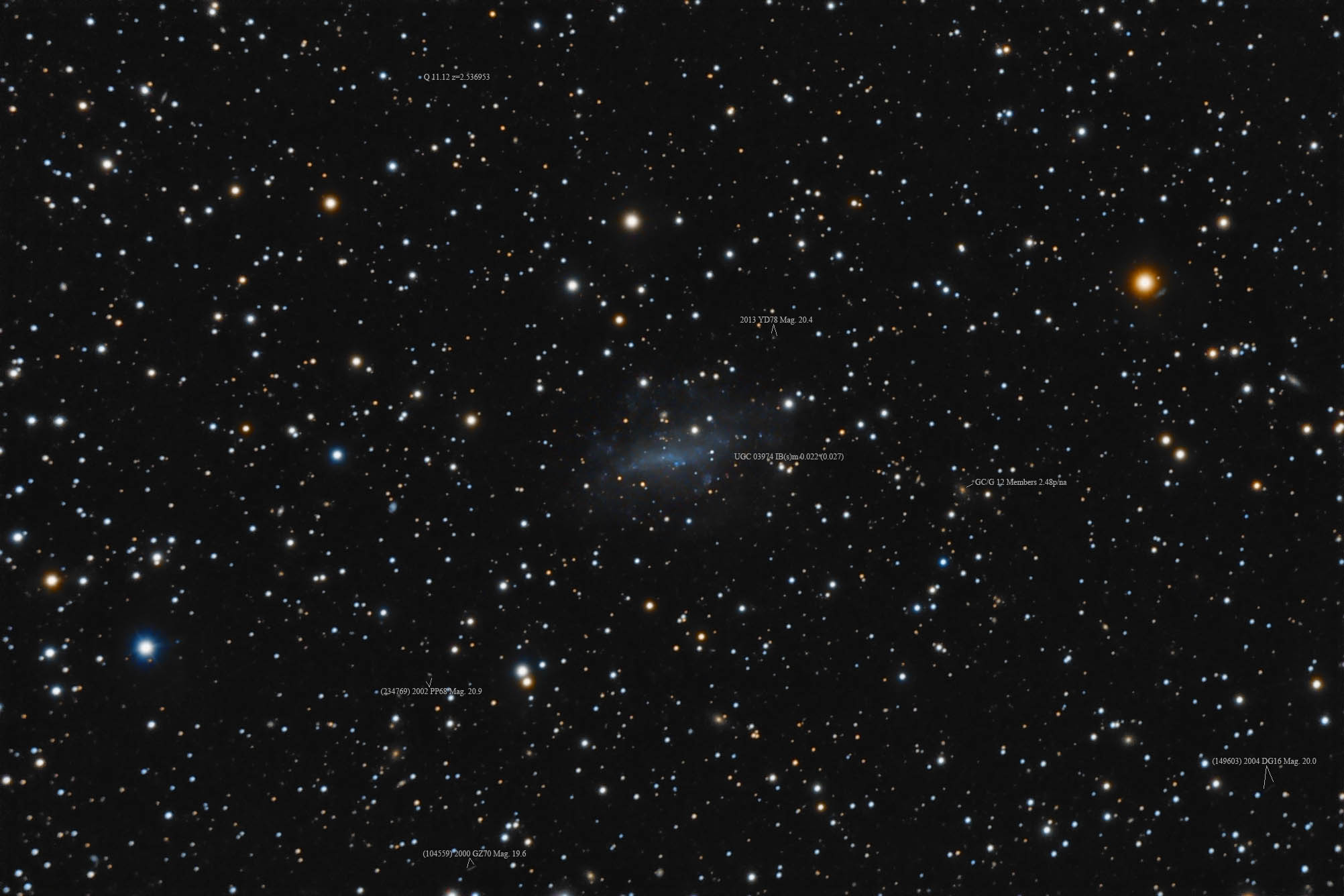