UGC 4261 is a mess in southern Lynx about 300 million light-years away. It consists of three rather bright blobs with plumes and loops indicating this is a merger in progress. One paper from 1994 http://adsabs.harvard.edu/cgi-bin/bib_query?1994A%26A...291...57R says it is likely forming a ring galaxy through a merger. I\'d put it on the to-do list for a couple hundred million years from now but I doubt that would be productive.

As mentioned the Sloan survey gives it three different positions. One is for the center of the blob, a bit east of the three bright parts. The another is the lower of the three bright parts while the NED position for UGC 4261 is the middle blob of the three. Only the center blob has a spectral redshift measurement that I find. (Since I wrote this a Friend of a Friend redshift for the lower blue blob has been added to NED giving it an insignificantly less redshift.) The third Sloan position is the upper bright blob. The Sloan image shows the middle blob much redder than the blue upper and lower blobs. My color data without IR and UV that Sloan includes mapped to visual colors shows the middle one slightly red with the other two slightly blue but the difference is small. I barely see it with my old eyes. With three blobs could it be three merging galaxies? I\'ve not seen that suggested. If you look at the high resolution Sloan image the lower blob is made up of several smaller, overlapping blobs. Unfortunately, this one isn\'t in the Hubble Legacy Archive. I\'d love to see what the HST shows for this one! I\'ve included the Sloan image at 0.198\" per pixel which shows the main eastern loop and the western \"jet\" to be made up of individual star clouds or star clusters. I think it likely that the western \"jet\" is really a loop like the eastern one just seen edge on. Purely my speculation of course. Note there is a faint fuzzy round plume at the end of this southwestern \"jet\". I needed more time to bring it out than the skies allowed. Though I hadn\'t realized it was there or would have tried harder to find more time.

There are no other galaxies in the image at 300 million light-years which would make even a two galaxy merger seem unlikely in such an uncrowded part of the sky. There are four galaxies with a redshift putting them about 415 million light-years away. Due to rounding, they are listed at 0.41 and 0.42 billion light-years though they are in closer agreement than that indicates. There are many galaxies without redshift data in the image. Two appear to be an interacting pair in the southwestern corner of the image and are labeled but show \"na\" for a redshift look back time as that wasn\'t available. Another is seen through the edge on disk of a galaxy with redshift data. I doubt they are related but annotated the little guy anyway.

Above UGC 4261, halfway to the top of the frame is an area that appears to be a scattered galaxy cluster. NED lists these points as galaxies but without redshift data but for one a bit off the eastern (left) end which has a look back time of 4.93 billion years. Is this a cluster and is this galaxy a member? NED shows now cluster in the area but for one I have marked well to the east with 9 members, 4 of which are in a tight triangle shaped area with a photographically determined look back time of 4.31 billion years.

Two rather bright asteroids appear in the image as well. Since the color data was taken a different night the color trails they\'d normally leave at this brightness aren\'t seen. Details are on the annotated image.

When I went to make the annotated image I found something I\'ve never seen at NED. Several dozen stars with redshifts that of a quasar. Obviously, that can\'t be. NED lists them two different ways. Some as just stars as I mention which they go on to show as either Candidate QSOs or Rejected Candidate QSOs. If rejected there\'s a problem with the redshift. In all cases, the redshift was photographically determined. This is usually reliable but if something between us and the star is absorbing certain frequencies it could mislead this type of determination. Is that happening here? I find nothing on it. The others are listed both as stars and as UvS for Ultraviolet Source as found by the GALEX Space Telescope. All of these are shown also as Candidate QSOs much as UvES objects I\'ve annotated before though those were listed first as UvES then as stars while these are stars first. I suppose this means NED is a bit doubtful about them being QSOs. Again I find nothing to support my guess. In any case, none of the UvS objects were \"Rejected Candidate QSOs\". I listed some of the non-UvS candidates before running into the first of several rejected ones. There were so many and I was getting a bit leery of them being real QSOs that I stopped annotating them. I did annotate all UvS Candidate QSOs, however, listing them simply as UvS as the full designation would have made the annotation messier. The \"p\" after the look back time indicates it and the following z value were photographically determined. I only listed one rejected QSO candidate, the first I found. It is hiding right by a field star that is apparently brighter making it had to see so I drew a line to it. Since this was written I\'ve found many of these star/quasar candidates turn into rejected quasars. I suspect most if not all are just field stars with anomalous spectra. 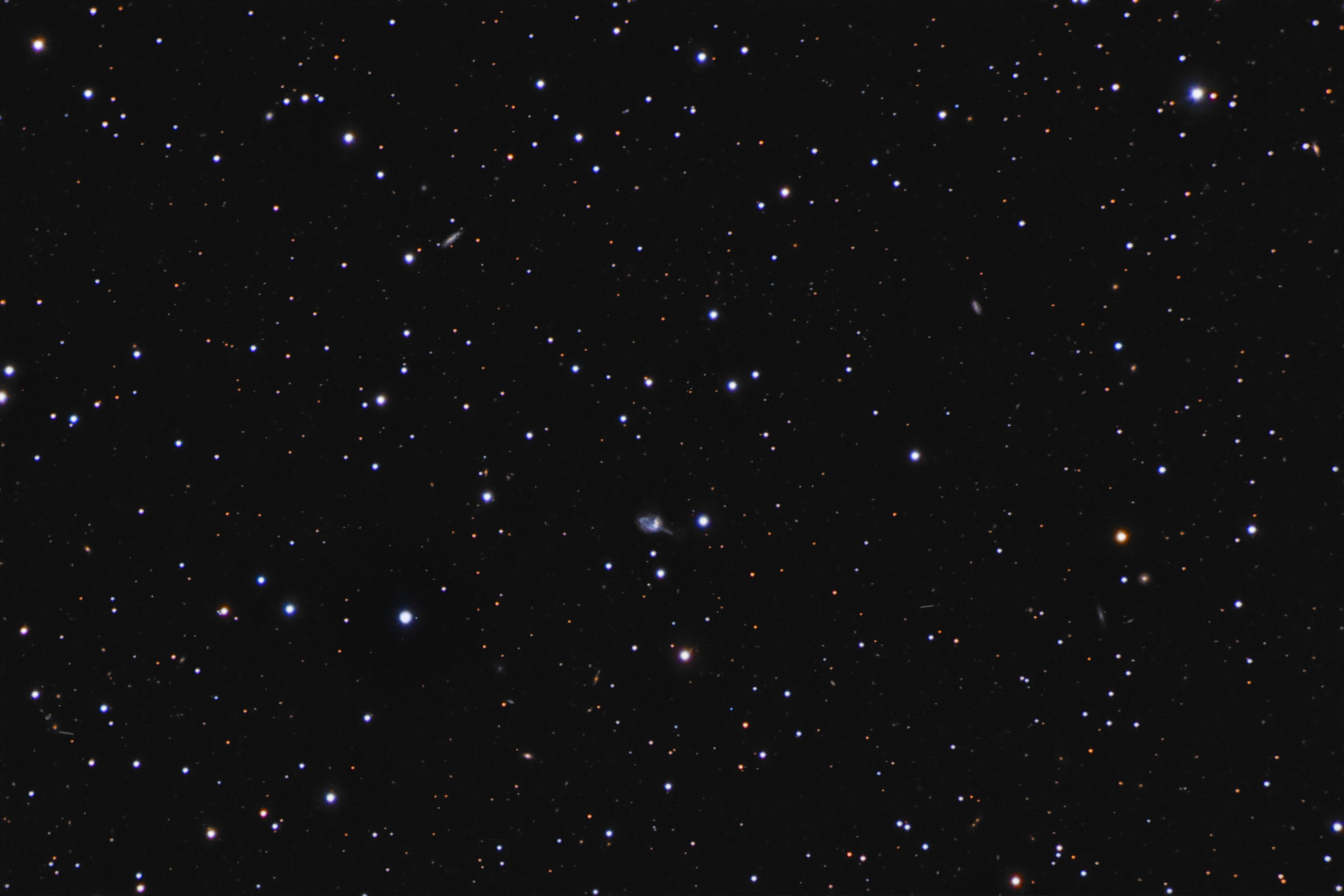 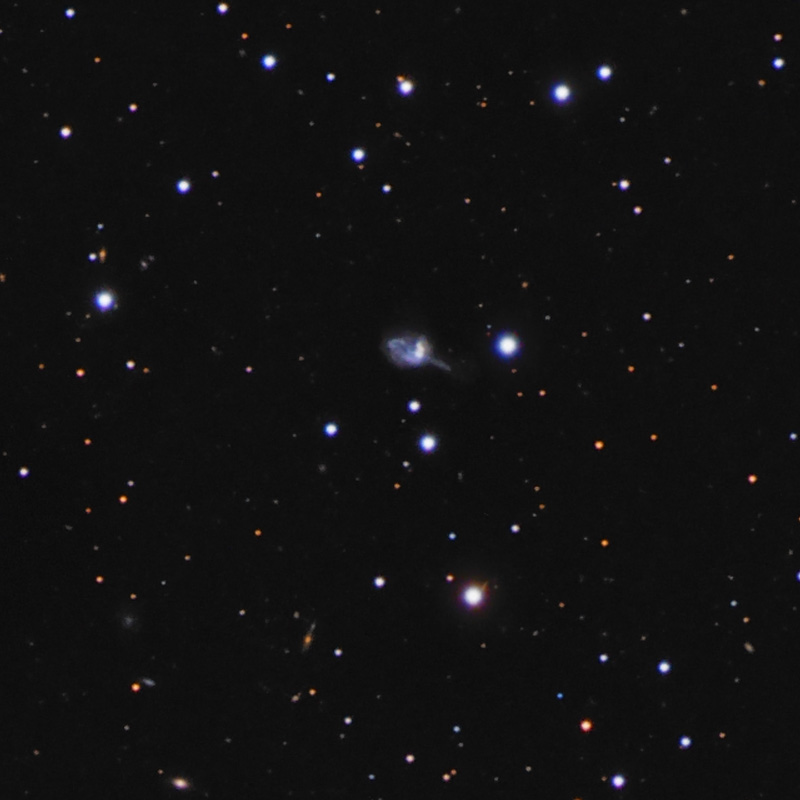 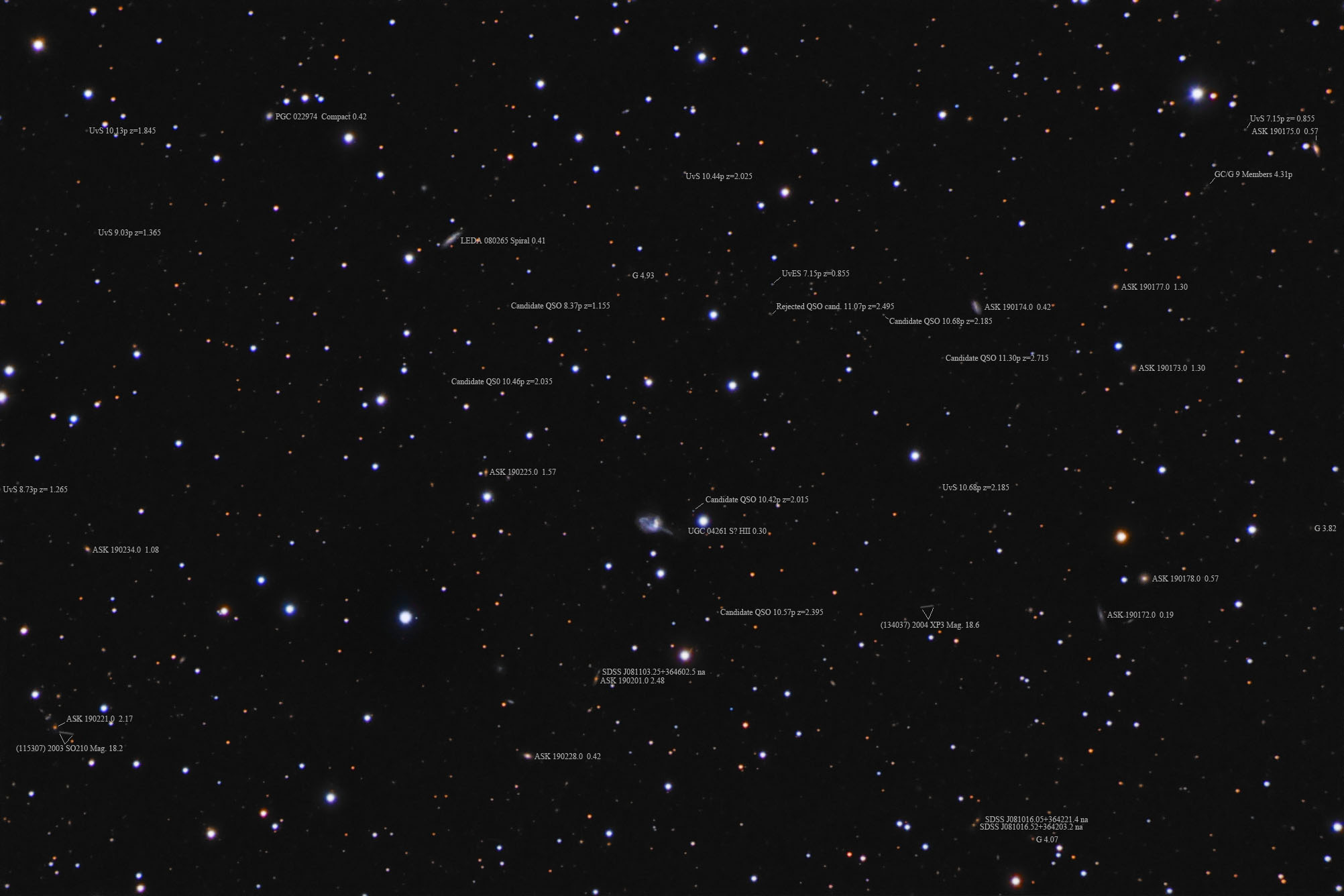