The UGC also lists a UGC 4352c. Unfortunately, the position has a 3.5\" error circle. That could encompass either the blue object I mentioned or the orange core. The position given is between the two but closer to the core. Oh yes, there is no UGC 4352a. I wish they were more definitive. I\'m going to go with UGC 4352b being the third member and c being the core of NED02 with a position error. But is b a separate galaxy or part of the galaxy as NED says. Is it the remains of the core of a devoured galaxy? I lean toward the latter.

UGC 04352 NED01 is classed as an Sc spiral and is seen edge-on. It appears somewhat warped. I didn\'t resolve a dust lane. UGC 04352 NED02 is classed as Sa. I\'d tack a peculiar onto to that considering that odd radial red dust lane. Or is that dust in the plane of UGC 4352 NED01? While the redshift of UGC 4352NED01 is greater than that of the companion it does appear to lie in front of it. At least I see no obscuring from the stars in the disk of the companion I\'d expect if it were behind the companion galaxy. I doubt the dust is related to the edge on but it is odd how it lies in the same plane. This is one I wish Hubble would take a look at! Unfortunately, I found nothing at the HST Legacy site.

Very few other galaxies are even identified, far fewer with redshift data. Even though the Sloan survey covered this field NED has little on it. I\'d really like to know about the odd object(s) south-southeast of UGC 4352. Unfortunately, it isn\'t listed. I\'ve marked it with a question mark. There appears to be a faint plume to the west from the north end. Is it two galaxies in collision? Just too far away to tell much. The Sloan image doesn\'t appear to pick up the plume. It\'s seen in all subframes. I suppose it could be a reflection but not like any I\'ve seen before so think it real. I sometimes pick up plumes the SDSS doesn\'t. This may be one.

This one was suggested to me by Sakib Rasool. 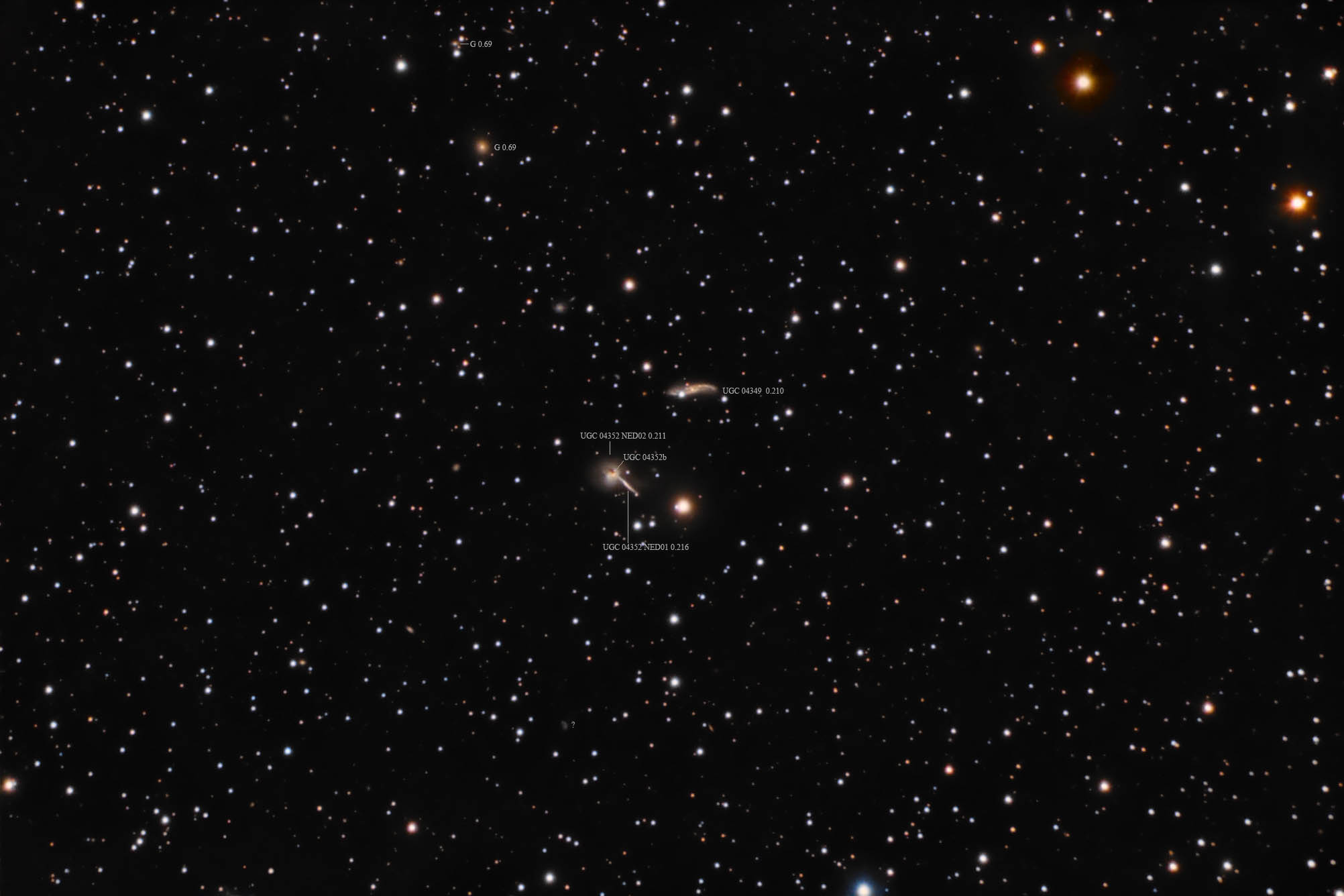 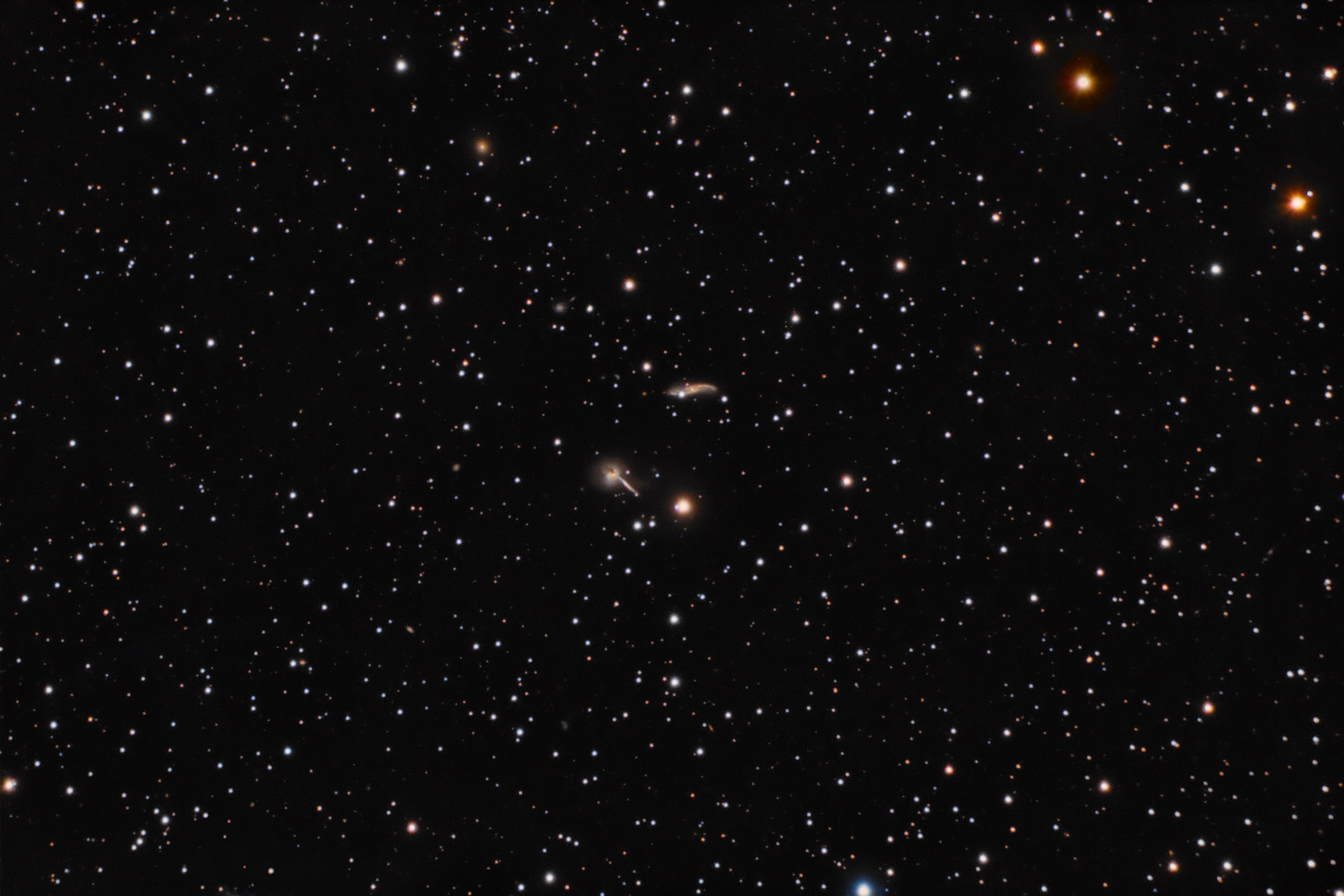 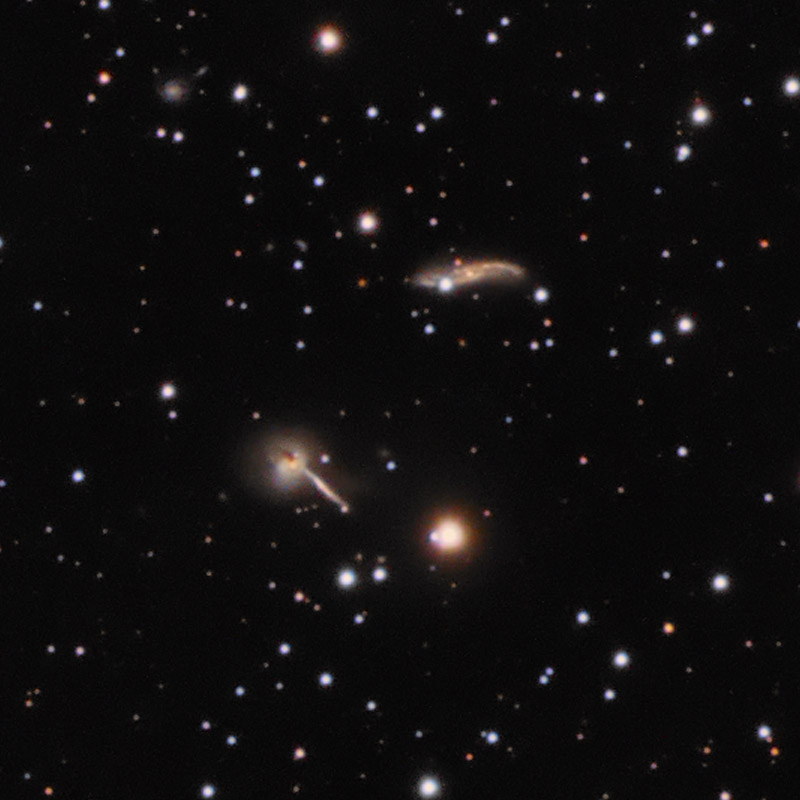