UGC 4671 and NGC 2692 are a pair of very different galaxies in northwestern Ursa Major just above its front paws. Redshift puts them about 190 million light-years distant. UGC 4671 is classed simply as S? while its much redder companion is listed as SBab:. NGC 2692 being a rather normal red barred spiral with little to no recent star formation is a rather dull partner but a nice color contrast to the far more interesting UGC 4671. This is a tight blue spiral in the center surrounded by a large, disk with only hints of spiral structure. While NED lists several galaxies seen right through this disk it omits the most interesting one. The others are very small and star-like but the one NED omits appears to be a distant, near edge on spiral. It has a normal left (east) side and a reddish core but is missing most of the western (right) side. I doubt that it is really missing. Just that it is behind UGC 4671 and the western half of the galaxy is mostly obscured by dust and gas in the denser core region of UGC 4671.

Oddly the literature has little to say on this. The only paper I found with anything on it was published in 1997 and says: \"If the sharp linear feature in UGC 4671 is of tidal origin it is difficult to see how it connects with the main galaxy. Further apart from this feature there are only modest signs of disturbance of the H I disk of UGC 4671. The feature is hence probably best explained as an edge on dwarf galaxy seen in projection against the disk of UGC 4671. Note that the velocity field in the region of this feature is consistent with this interpretation.\" To me, the galaxy appears a normal size, not a dwarf. I can\'t tell for sure but the paper sounds a bit like it is assuming the galaxy is in front of UGC 4671. That would explain calling it a dwarf. Maybe the illusion of an off-center core for it added to the problem. The photo in the paper really doesn\'t resolve the core as it loses it in the glare of the center region of UGC 4671. I do wish UGC 4671 were closer as it looks like it has a lot of fascinating detail just asking for a better view.

I found nothing indicating UGC 4671 and NGC 2692 were interacting. The large, low luminosity disk of UGC 4671 shows some hints of plumes and tidal distortions at the edges, especially on the eastern side. This could be from it digesting a small companion in the past. Otherwise I don\'t see much around it that could have interacted with it long ago. NGC 2692 was discovered by William Herschel on March 17, 1790. It isn\'t in either of the H400 observing programs.

The annotated image has something to annotate for a change. As usual, distance in billions of light-years based on NED\'s 5 years WMAP calculator is shown after the object designation. Larger objects are noted by catalog name while the rest are noted by type, G for a galaxy, GC for a galaxy cluster, Q for quasar and UvES for quasar candidates. All that NED has redshift data for are noted. A \"p\" after the distance indicates it was determined photographically by how its intensity varies in different filters rather than spectroscopically. This isn\'t quite as accurate but usually in the ballpark. The location of galaxy clusters is noted at the position of the big cluster galaxy that anchors the cluster. The difference in distance estimates is likely due to that of the cluster being made photographically while the galaxy is usually done spectroscopically. I suspect the big cluster galaxies distance estimate is the more accurate one.

One fuzzy galaxy southeast of NGC 2692 is not in NED at all. This happens rather regularly. It and another faint fuzzy galaxy to its southeast appear likely nearby low luminosity dwarf galaxies. While the latter is in NED it has nothing on it to settle the issue, however. 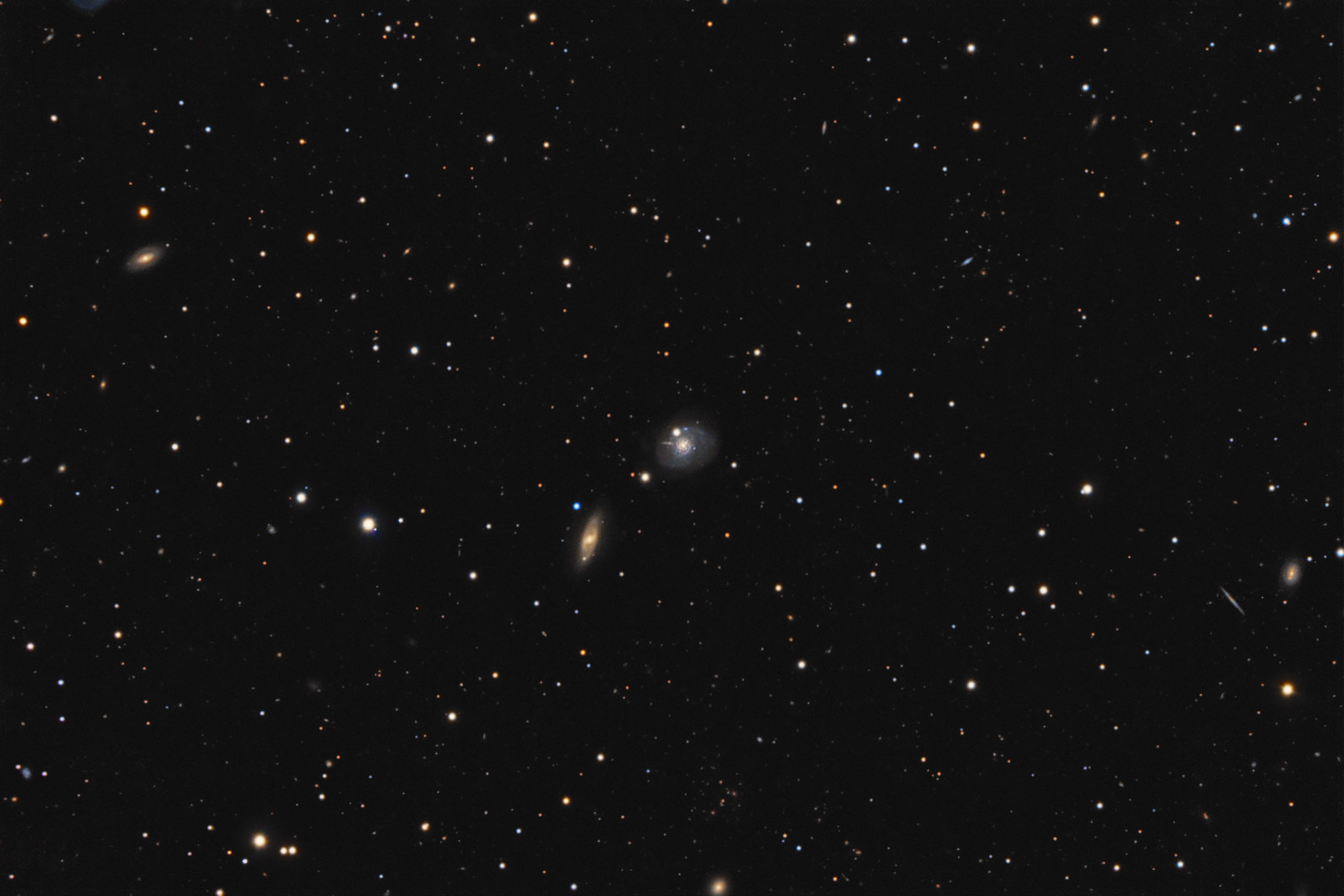 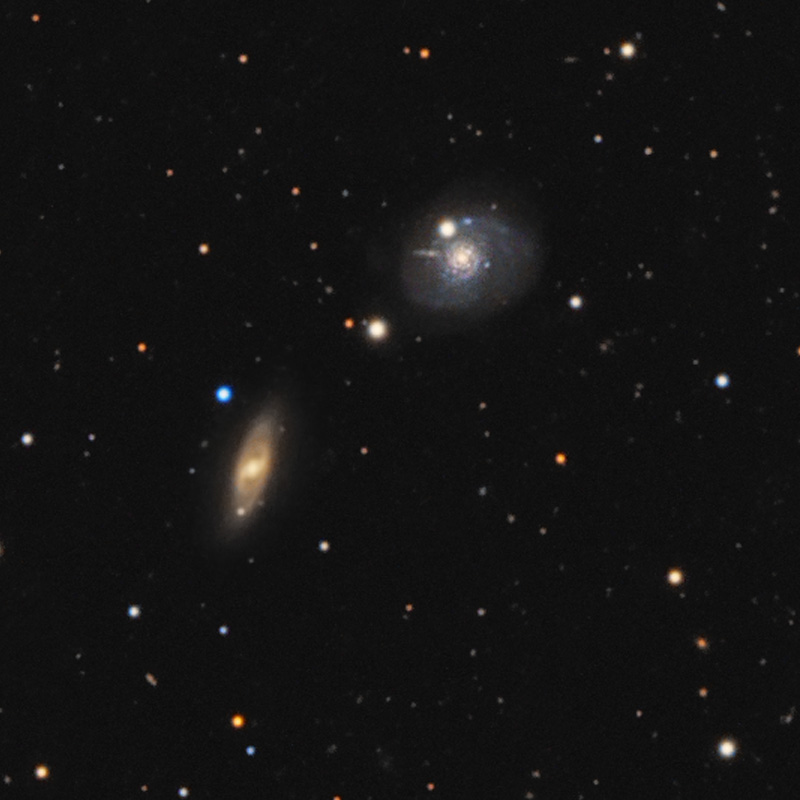 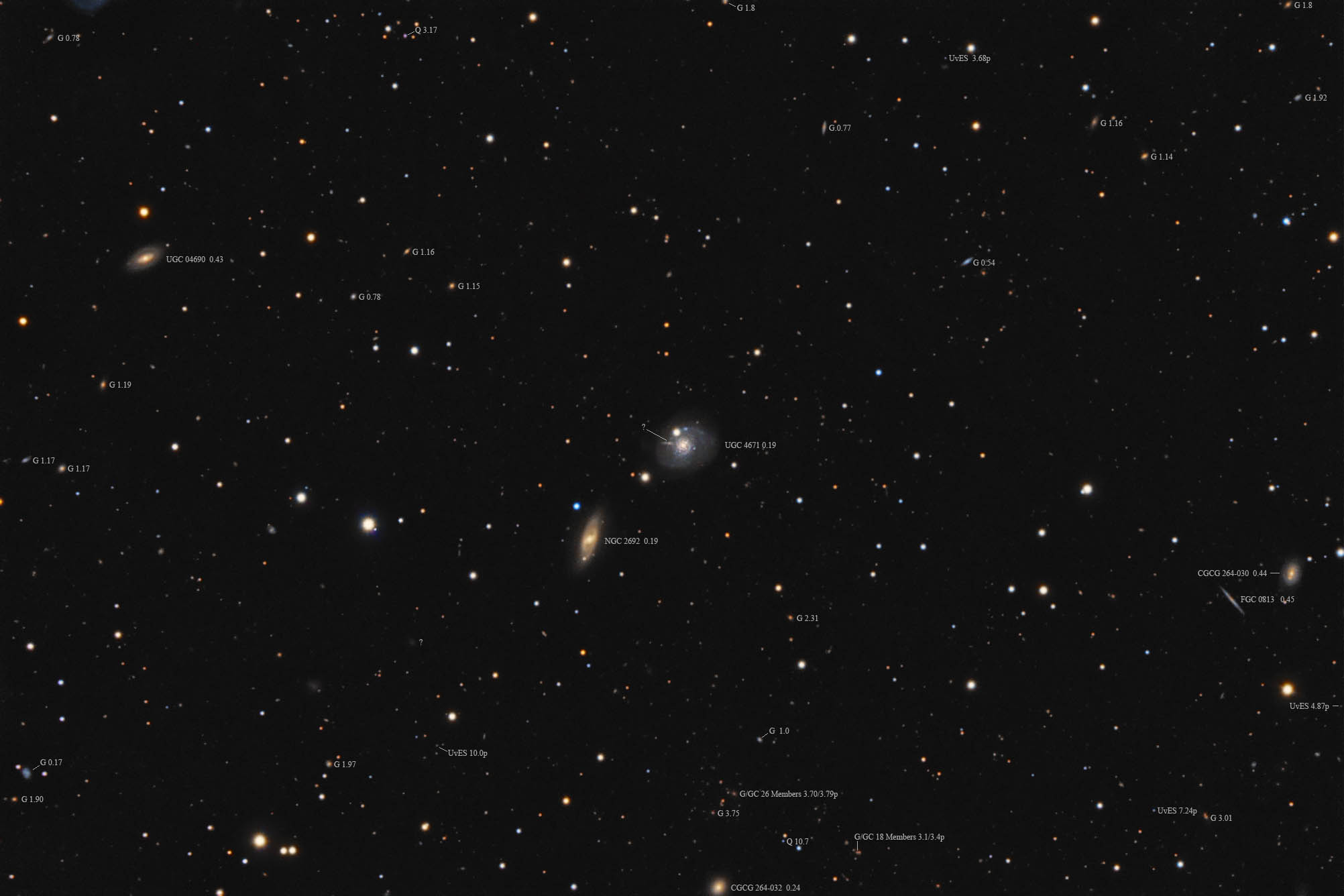