UGC 5101 is another one Arp overlooked. It has what he\'d call a jet going to the west. I don\'t know what he\'d call the plume that arcs partly around the galaxy and seems unrelated to the \"jet\". It is quite likely both features are the result of a merger or mergers in the past. Some papers say one merger, others two. I\'d favor the idea it has merged with two each creating its own plume as it was ripped apart. It is in Ursa major about 8 degrees south of M81 and 540 million light-years away. Though one looping behind the galaxy could account for both plumes with there really being only one partly hidden behind the galaxy.

I used one of my very rare nights of seeing sufficient to work at 0.5\' per pixel in order to get as much detail in this galaxy as possible. The posted image, however, has been reduced to 0.67\" per pixel as the night just wasn\'t as good as I\'d hoped. Also, to keep bandwidth within reason it has been cropped considerably to about 24.7 minutes wide minutes from the original 33.7 minutes. Height was left at my normal 22.5 minutes.

The annotated image has 12 probable quasars with a half dozen more cropped out. Arp believed (still does from reports I\'ve gotten) that quasars were not distant objects like their redshift indicated but were ejected from active galaxies like UGC 5101. He\'d have loved all the quasars around it if he had known at the time. His idea was the redshift increased with time from their ejection from the galaxy. So those nearby would have low redshifts while those further away higher redshifts. He had to invent strange physics to make this work. His fixation on the near crackpot physics got him kicked off the 200\" scope.

Those marked UvES are Ultraviolet Excess Objects not yet confirmed as quasars but what else could have such a redshift and still be bright enough to pick up in a 14\" scope? Well, they could be stars in our galaxy with spectra that is fooling photometric filters into seeing a redshift that isn\'t there. Though I\'ve found most NED lists as UvES objects turn out to be true quasars. One is a strange X-ray object. It is toward the west side of the image and fully labeled so you can look it up at NED if you wish. Its position is vague. The only object within its rather generous error circle that appears to be the object is the one I marked. In the Sloan image, it is made up of several different bright colors, very strange indeed. Only one other object was within the error circle and it, too faint for my system, looked like an ordinary star in the Sloan image. Due to the uncertainty, it carries a question mark label.

The other questionable object is at the top of the image left of center. There is an odd blue galaxy made up of two condensations. One to the north being brighter than the one to the south. There\'s nearly a hole between them creating a near ring-like structure. I was wondering what NED would have on it. Nothing it turned out. It does show an object at about the position of the \"hole\" but lists it as 21st magnitude and is listed as a near point source. Obviously, the blue object is far brighter than that and far larger in angular size. Even the Sloan image showed no point source at the listed position. It remains an unknown. 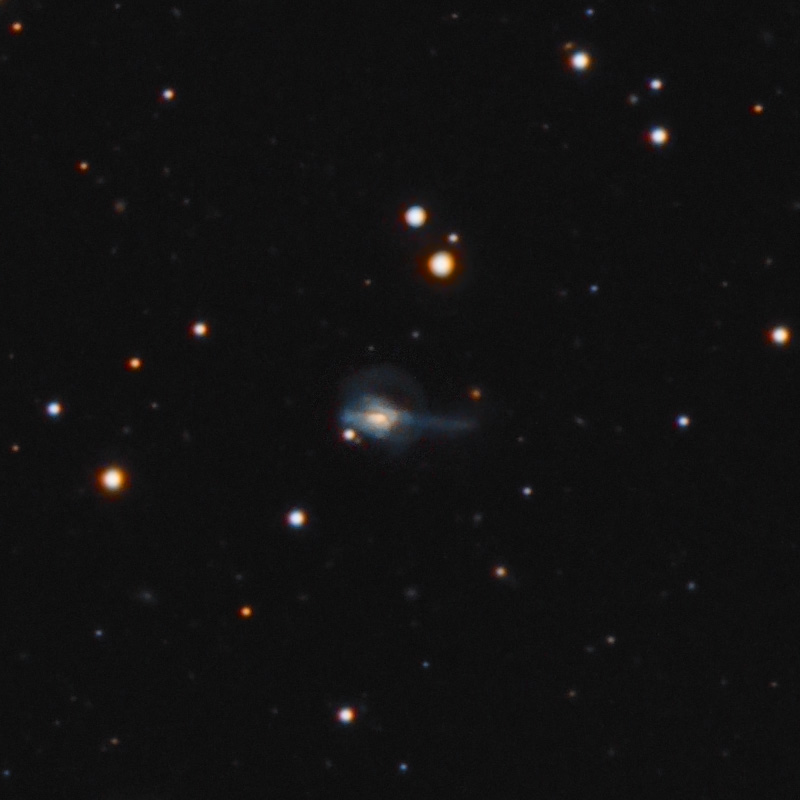 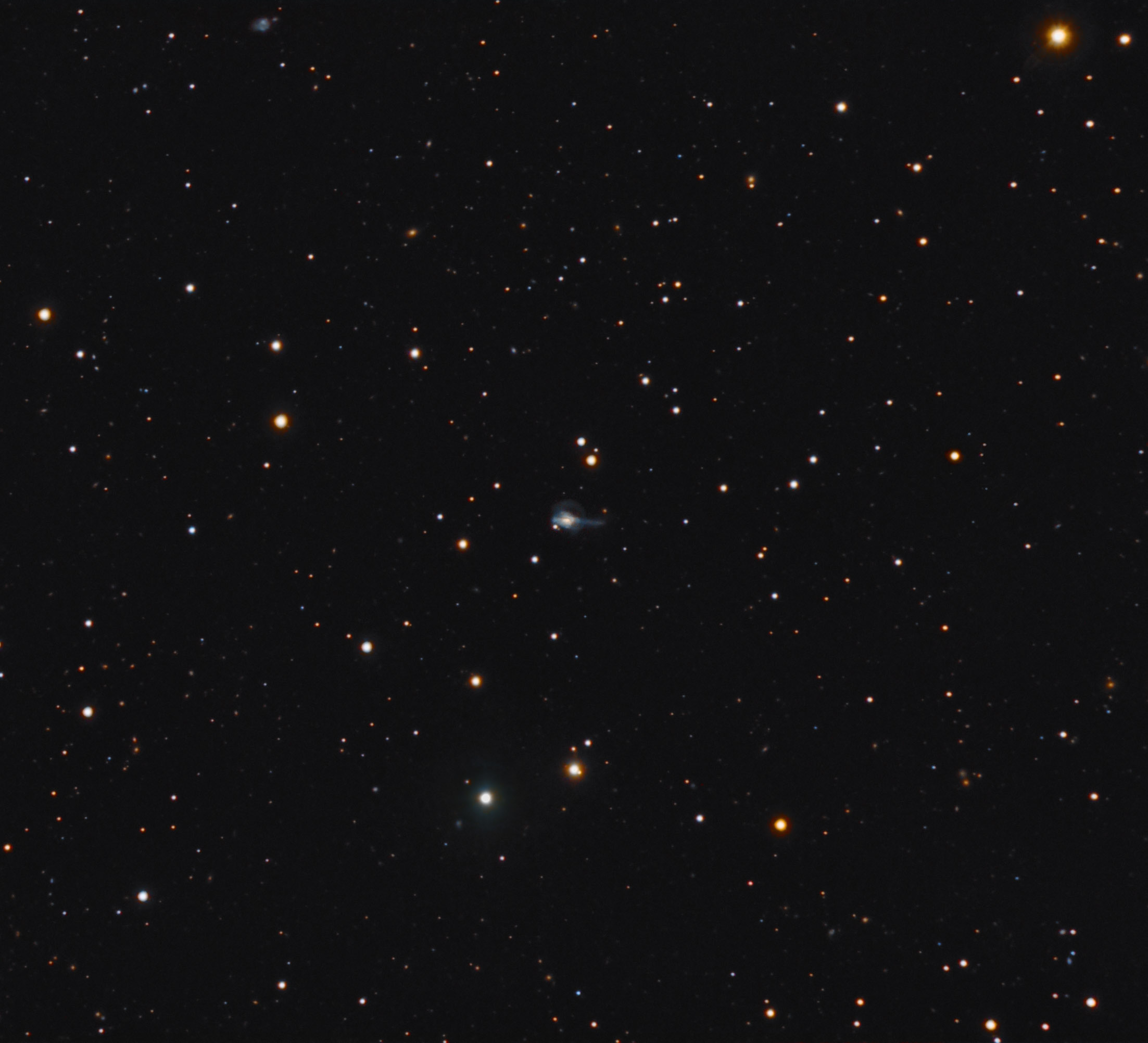 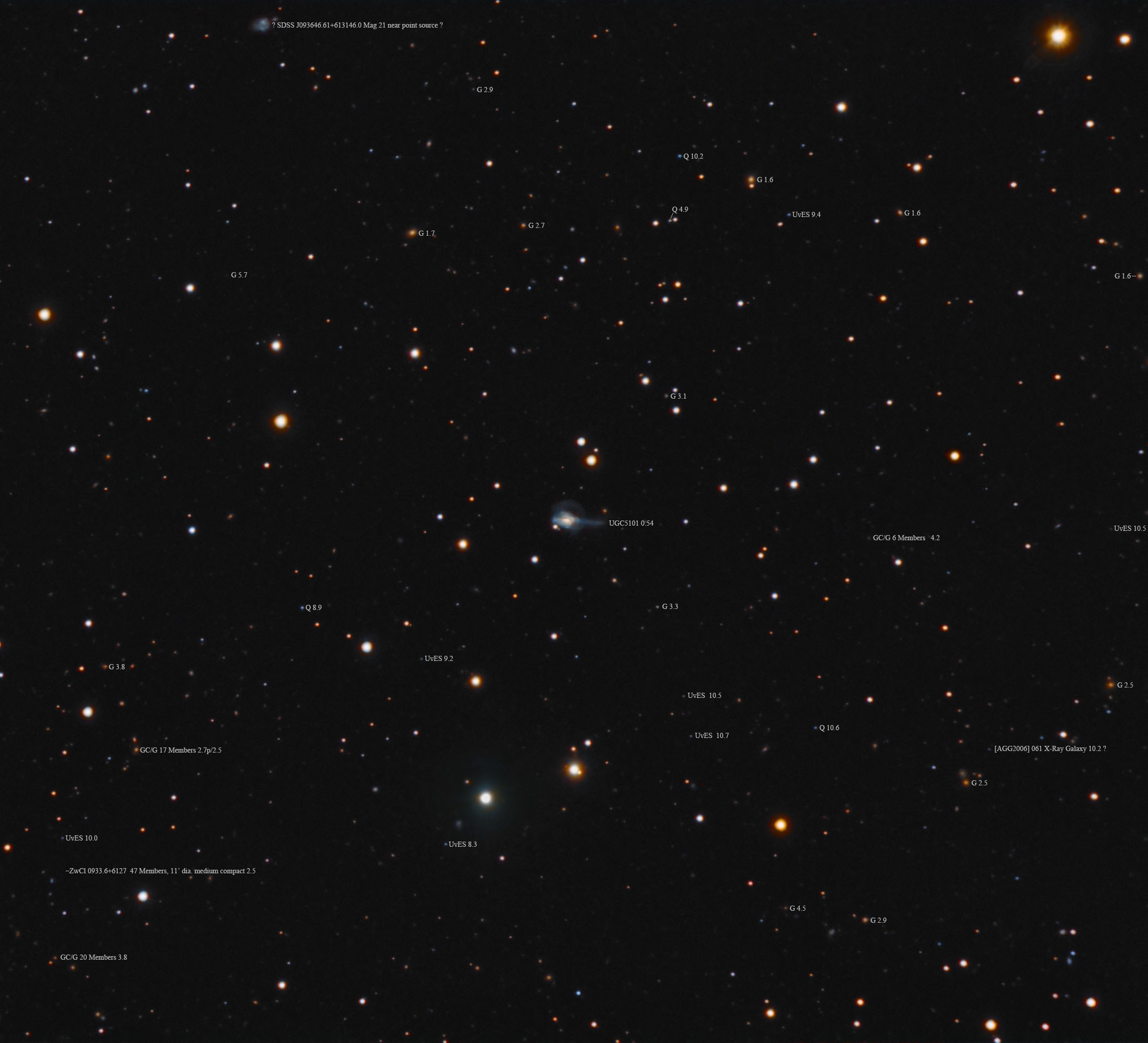