UGC 6446 is a low surface brightness, face on spiral in Ursa Major just under the bowl of the Big Dipper. Redshift puts it about 38 million light-years distant but Tully-Fisher measurements put it at about 51 million light-years. It is sometimes considered part of the Northern M109 Galaxy Group. If so that would favor the 51 million light-year distance so I\'ll go with that. That would make it about 55,000 light-years across its longest diameter. I\'m measuring this diameter at 3.7 arc minutes while NED lists its size as only 1.25 arc minutes. Others say diameters up to 2.8 minutes. Yet I\'m quite confident at my measurement. I can\'t explain the difference.

At its north end is what I take to be a star cloud but NED lists as a separate galaxy, SDSS J112641.92+534633.3. Often these are just star clouds. Sometimes NED indicates this other times it doesn\'t. Many other knots are listed as separate galaxies in NED. This includes the bright blue star-like knot east (left) of the core). That is listed as SDSS J112643.98+534449.8. Again no distance or other data but it is quite obviously part of the galaxy even if NED doesn\'t indicate this. I suppose this northern object could go either way. They have little on it and nothing that would help decide this issue. If a separate galaxy as it looks somewhat galaxy like but if so it appears quite distant. But if it happens to be a true interacting companion then that could explain UGC 6446\'s long drawn out arm that reaches the bright blue star at the south end as well as the faint extended features. I doubt this, however. I was hoping to find something on this but came up empty.

Most of the annotations are basic but one at the far left edge I\'ve shown as */Q/UvS? This star-like object is listed at NED a first a star and then a quasar by the Sloan Survey and then as an Ultraviolet Source by the GALEX satellite. Redshift is by photographic means. While often rather accurate it can be misled in the case of some stars. If correct it is likely a quasar but it might be a very blue star in our galaxy. NED seems to prefer the idea it is just a star in our galaxy. Hence the question mark. Since I wrote this I\'ve watched many with this classification change to \"rejected quasar\" so I suspect it is just a star that responds to photometric filters as a distant quasar would. 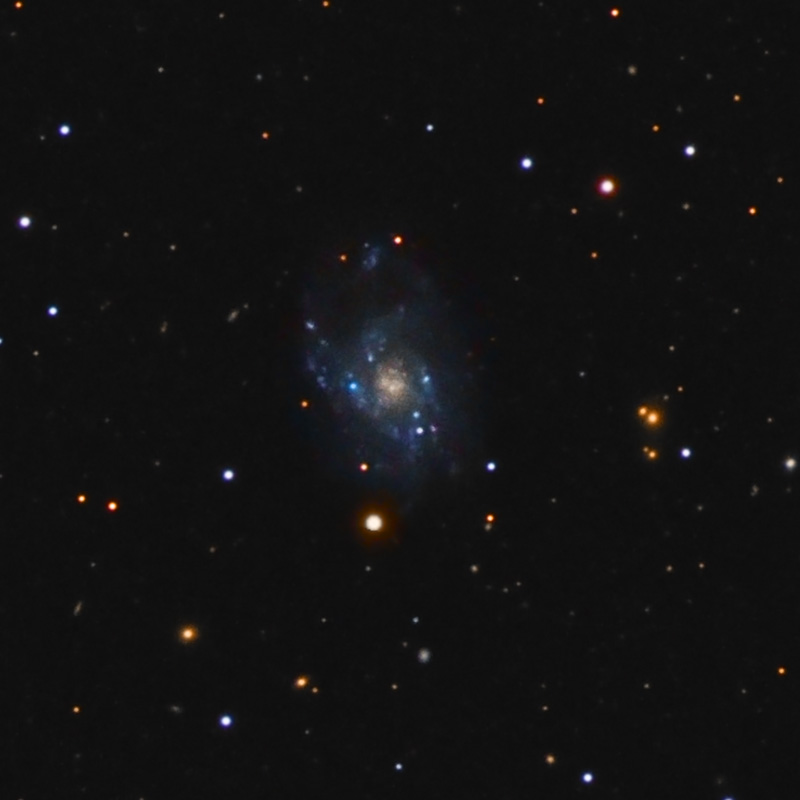 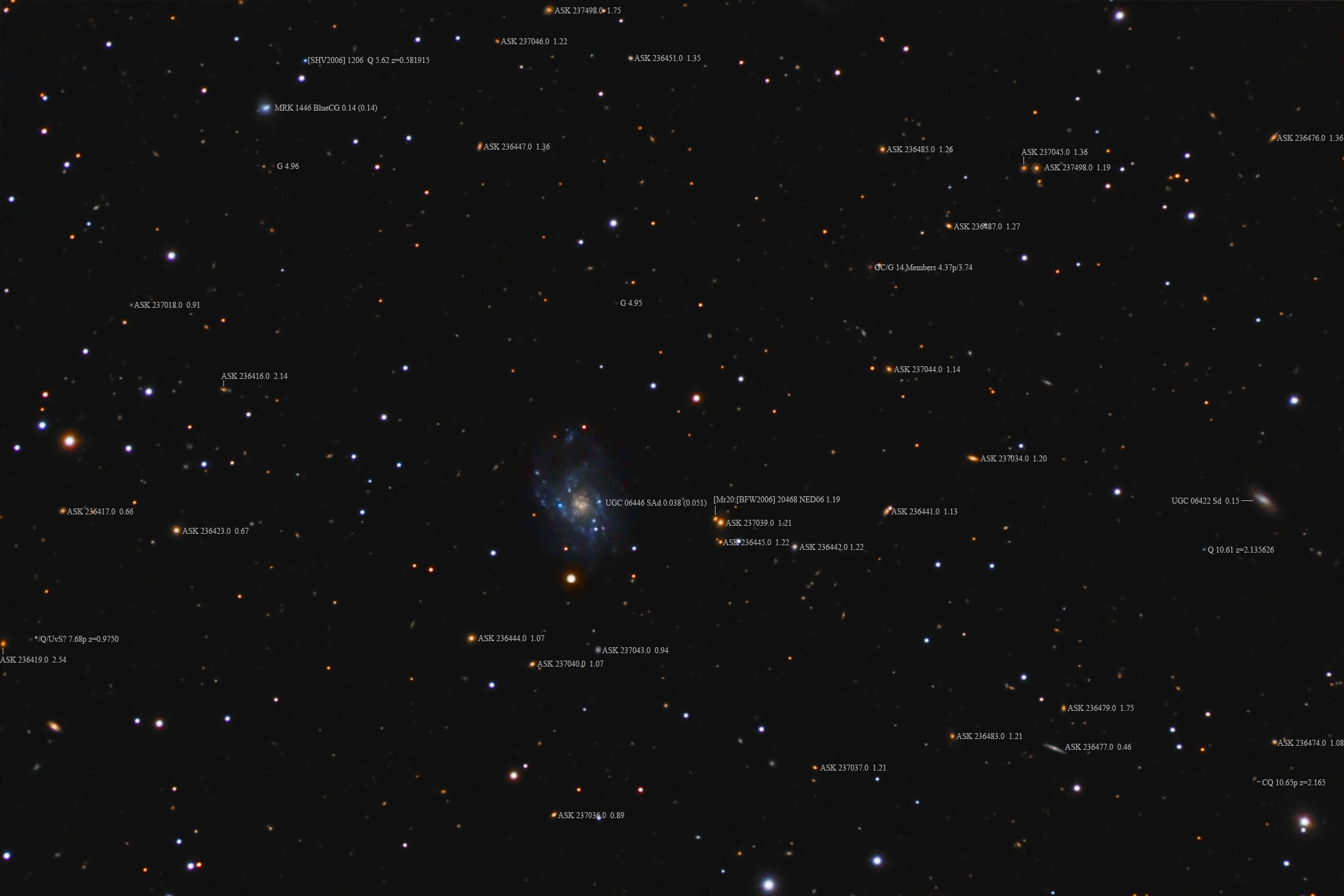 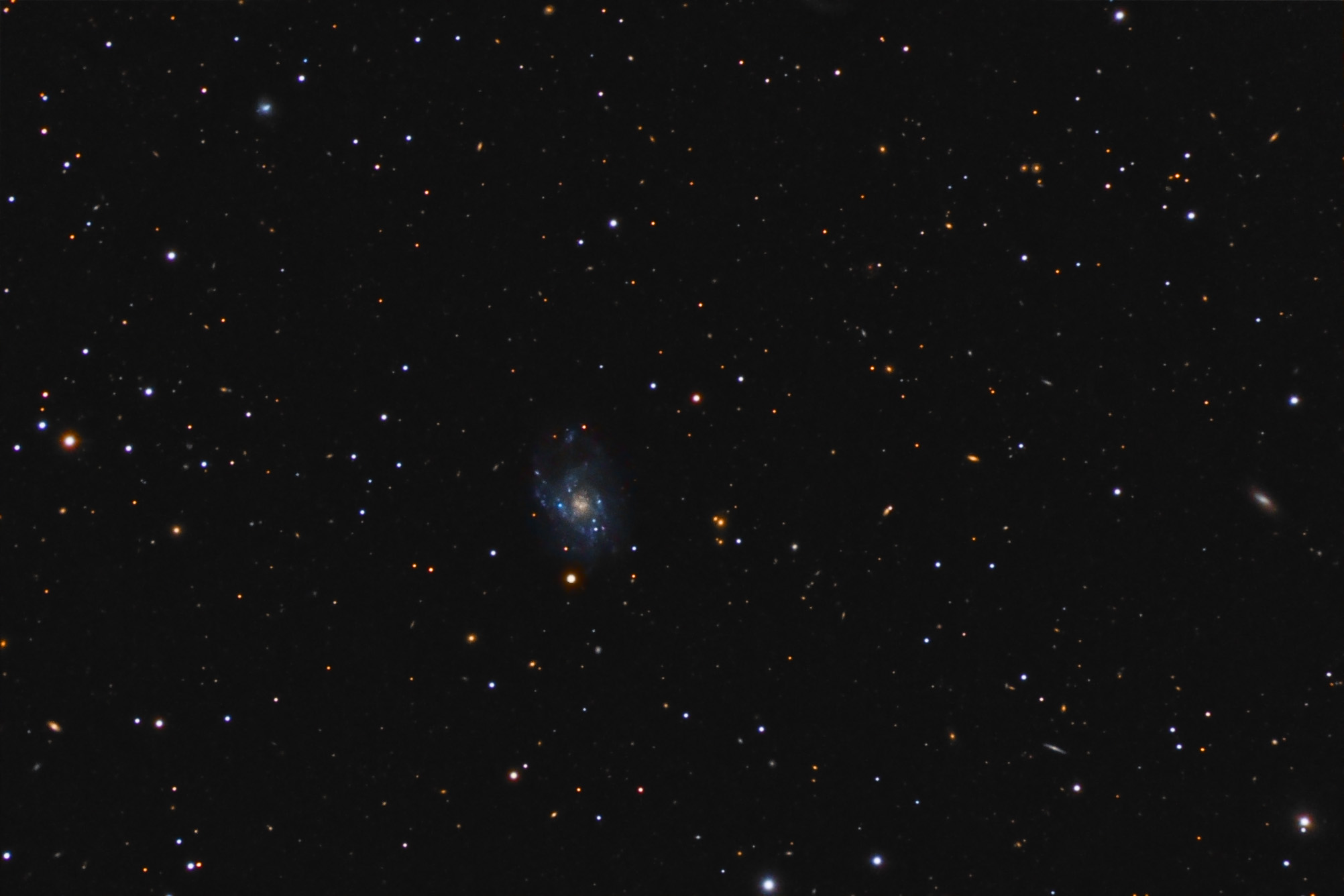