UGC 6955 aka Zwicky 2 is an IB(s)m: galaxy in southeastern Ursa Major about 54 million light-years distant by redshift and 57 million light-years by Tully Fisher estimates. A very good agreement. The de Vaucouleurs \"Reference Catalogue of Bright Galaxies\" says of it: \"Very low surface brightness. Well resolved. Asymmetric. Foreshortened central part. Smooth bar. Dimensions: 5 arcmin x 1.5 arcmin (Lick 36-inch plate).\" I agree with the description but for its size. I trace it to 6 by 1.9 minutes on my FITS luminance image. Using that size and the redshift distance I get a diameter of 94,000 light-years. Rather large for an irregular galaxy, even one with a hint of spiral structure but no defined core. Still, it has a center of old stars with an outer disk of younger blue stars as you\'d expect of a spiral. It seems to have some characteristics of both spirals and irregular galaxies. Being nearby and resolvable (not by me) I\'d expected to find some images of it but other than survey images I found none. Since the above note says it was taken with the 36\" Lick refractor I looked but couldn\'t find it on the net anyplace.

I found a couple other objects of interest in the field. To the west is ASK 517319.0 and a possible companion SDSS J115747.00+380724.3 on the arm. The apparently single arm continues on to end at a star. I checked the POSS and SDSS survey images and it is a star, not a third galaxy so that it is at the end of the arm is a coincidence of perspective and not real. Without redshift info on the SDSS galaxy, I can\'t tell if it is a true companion or not. I suspect it is and the cause of the odd arm but found absolutely nothing on it of use.

The other odd object is below UGC 6955 and looks like a double-headed comet. The northern and fainter galaxy is MAPS-NGP O_266_0142329. It is slightly red both as to the core and the \"tail\" to the east. The lower galaxy is only listed at NED as an Ultraviolet source, not a galaxy with a rather vague position that points to the middle of its tail directly east of the head. It is listed as GALEXASC J115833.05+375752.4 and is very blue as you might expect of an ultraviolet source. The SDSS picked up the northern galaxy but not the Uv Source. I\'ve found this survey to miss blue galaxies so I suppose this isn\'t too surprising. The odd dual comet tails are hard to explain as due to an interaction which usually sprays stars every which way. I\'d love to find an explanation of what is going on here or even if the two are related. But I came up totally skunked. A fascinating mystery.

Everything else in the image is rather ordinary. Again there are a lot of galaxies without redshift data. Galaxy clusters all had only photographic redshift information though sometimes the Bright Cluster Galaxy had a spectroscopic redshift that slightly disagreed with the photographic one for the cluster itself. When that happened both were listed. Most of the time the cluster and galaxy were only identified by their coordinates which were the same and both had the same photographic redshift. When this happened I listed them as GC/C with a p after the redshift for photographic. If the galaxy had a catalog entry other than coordinates that is shown after the detail on the cluster it anchors along with its spectroscopic redshift which is likely more accurate than the photographic one. 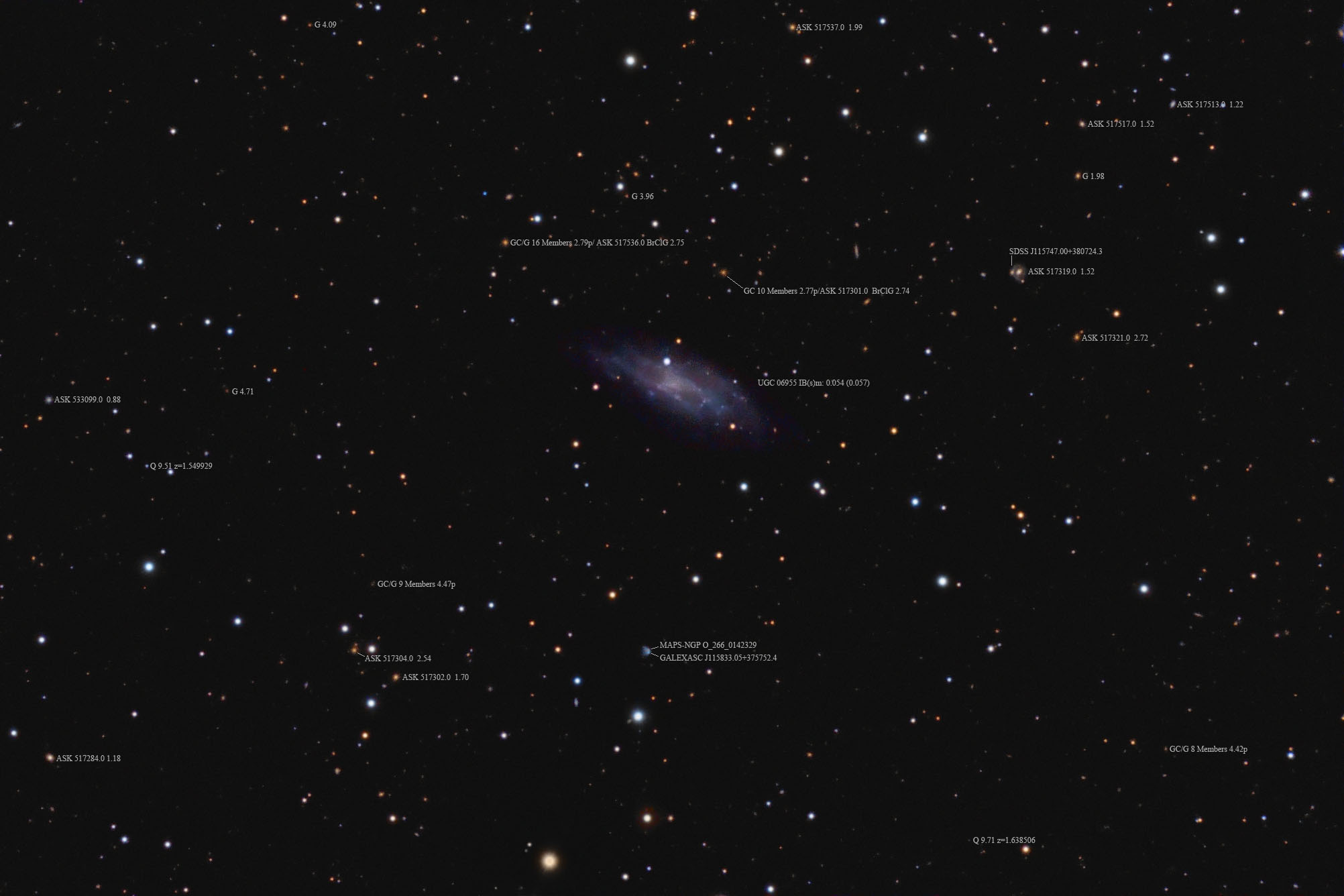 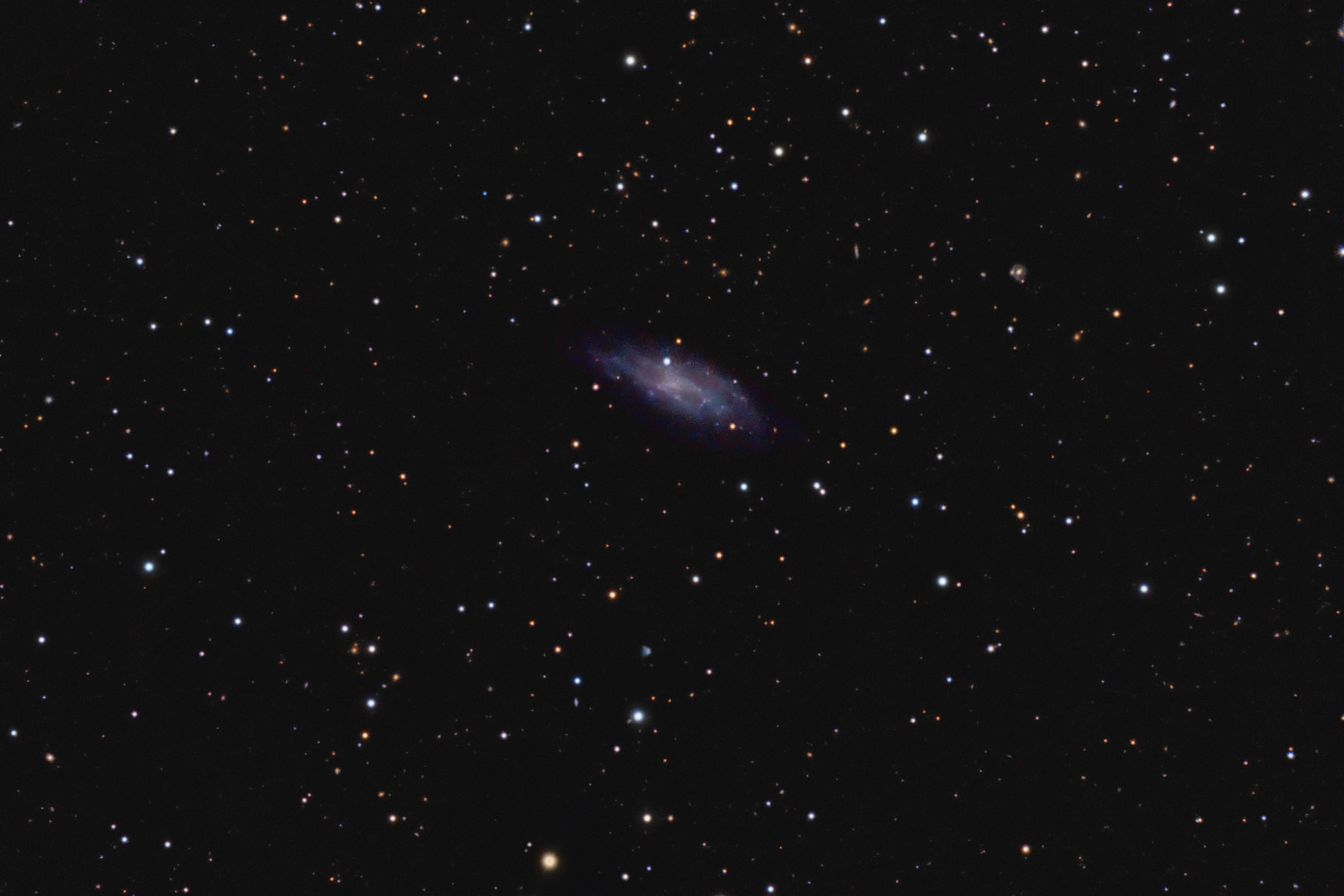