UGC 9002 is a strange galaxy in southeast Bootes about 200 million light-years. Technically the UGC considers this a pair of galaxies though most papers refer to the northern galaxy as UGC 9002 and the southern by any of several designations. It does appear they are interacting. I\'m going to consider the northern galaxy as UGC 9002 and the southern as MCG +02-36-035. NED classes UGC 9002 as a possible barred spiral. A note at NED says of this pair: \"A complex late-type galaxy paired with an SB0. The late-type shows chaotic barred and spiral structure, suggesting that it may be a spiral galaxy that was disrupted in an extreme encounter/collision. The DIS interaction class also extends to the SB0, where faint outer extensions are seen on broadband images. The bar of the late-type member exhibits no H{alpha} emission consistent with the interpretation of this galaxy as a spiral, rather than an irregular of some kind. H{alpha} regions of modest intensity are spread throughout the spiral arms, with the strongest emission from the region between the two components. The SB0 shows a strong H II-class emission spectrum.\" I also found it listed in a paper on polar ring galaxies. The paper is behind a paywall so I don\'t know if it considers it a polar ring galaxy or not. My first impression was that of a polar ring but it could be a disrupted barred spiral as the note above indicates. In any case, it is a mess!

It reminds me of the much closer and therefore apparently larger Spider Galaxy UGC 5829 that\'s also a disrupted blue galaxy.

The field contains another rather interesting barred spiral galaxy, MRK 0804. It is considered a starburst galaxy by some though that wasn\'t listed in NED\'s classification but was noted in its morphology. Usually, the two agree. Located at a redshift look back time of 260 million years it probably isn\'t related to UGC 9002. Its eastern arm is only slightly lumpy but the western one has several obvious bright star clouds. The northernmost one is listed as a separate galaxy with a redshift similar to that of MRK 0804 so I think it just a star cloud like the others in that arm. In fact looking at the PSF I think I see several condensations within it that don\'t show in the processed image. It may be a line of smaller star clouds.

The rest of the field is rather typical. Details are in the annotated image which lists all with a redshift at NED. 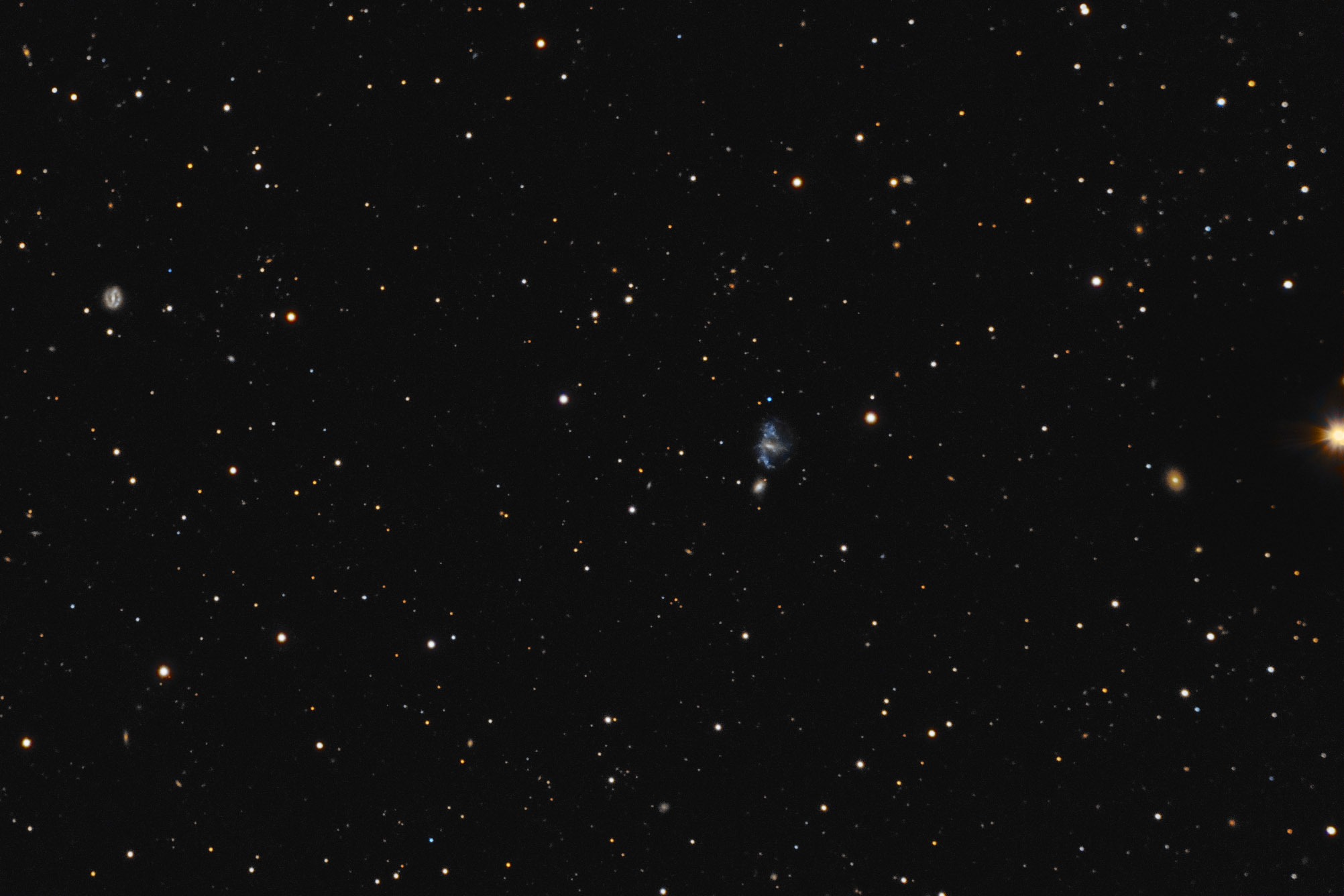 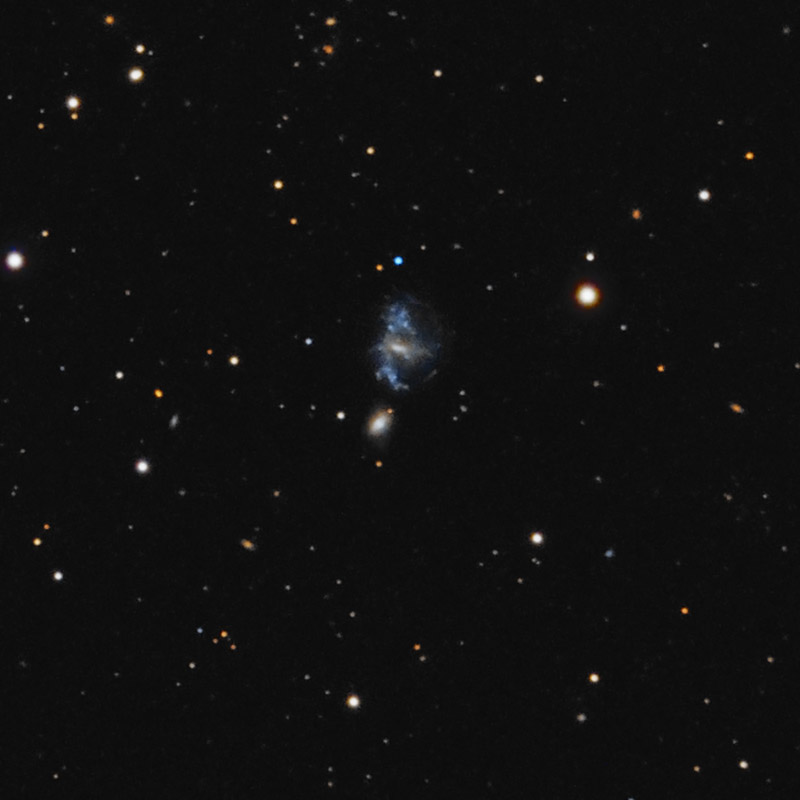 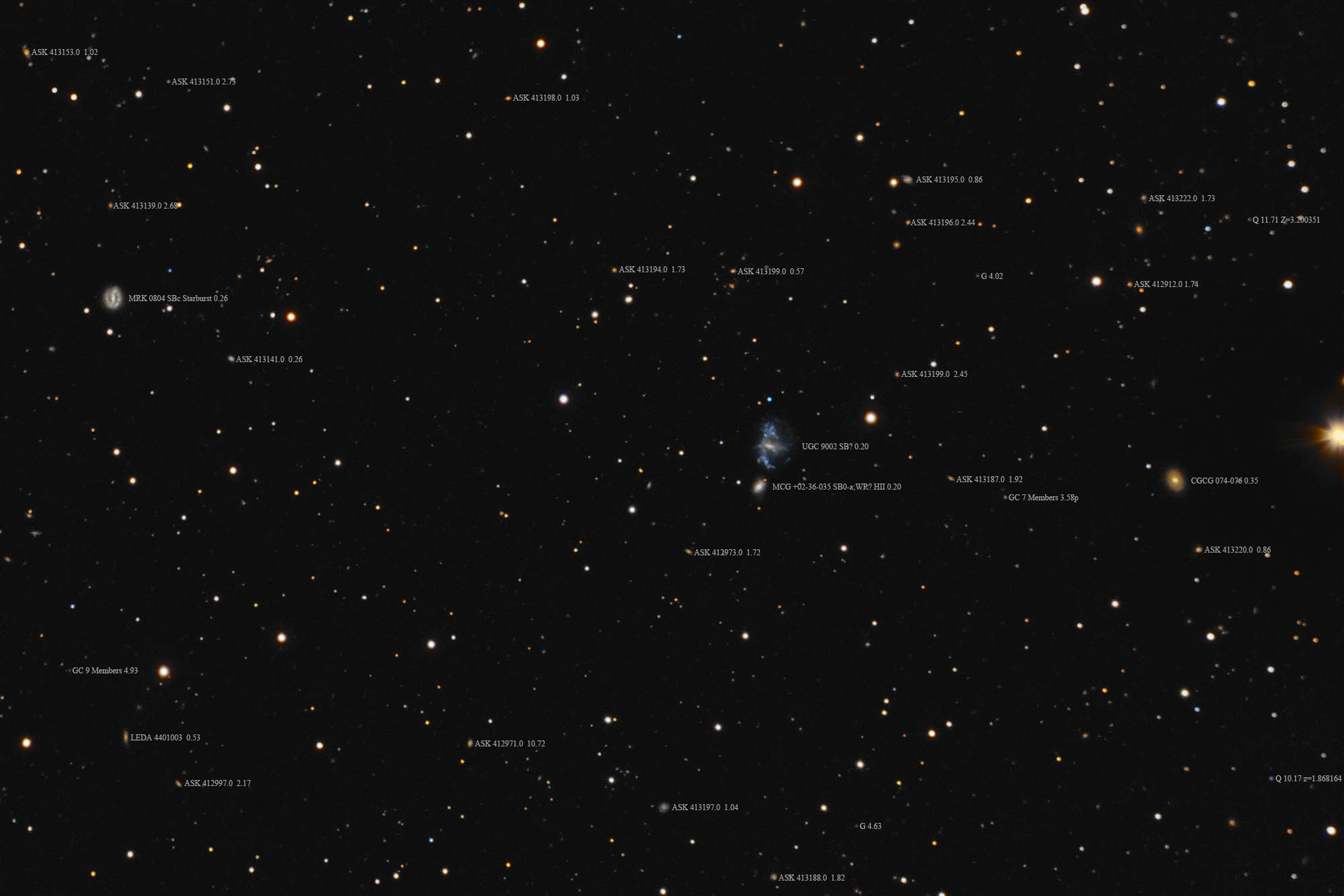