UGC 9521 and UGC 9523 anchor the WBL 524 galaxy cluster located about 410 million light-years from us in the southeast corner of Bootes. NED lists the cluster as population class 3 but I can\'t find how that translates into either size or number. Unless this is like richness class of Abell galaxy clusters, in which case it means it has 130 to 199 galaxies. In any case galaxies at that distance cover much of the field though they tend to be west of these two galaxies.

UGC 9521 was my primary target since it is a very odd spiral. Along its eastern edge, there\'s an apparent straight line feature that starts from a couple star clouds and ends at a larger, ill-defined star \"blob\" at the southern end. Is this the path of something it digested? I found nothing on either of these UGC galaxies so it is still a mystery. Seen at higher resolution in the Sloan survey image it appears this may be a one arm spiral unless this odd feature is the second arm. UGC 9521 is a very large barred spiral some 130,000 light-years in diameter by my measurement, including that southern \"blob\" as being part of the galaxy.

Northwest of UGC 9523 is a small, in angular size, blue galaxy that is listed in NED as an Ultraviolet Source rather than a galaxy. It was discovered by the Galex UV orbiting telescope. Why NED didn\'t pick it up as a Sloan Survey galaxy I don\'t know but it only appears as a Galex catalog object. Even stranger is the small, again in angular size, red elliptical like galaxy to the east of UGC 9523. That isn\'t listed in NED at all even though over a thousand galaxies are at least listed at NED that are in my image. The vast majority far smaller in angular size and much fainter. How these are missed I don\'t know but I find it happens all the time.

All galaxies and quasars with redshifts at NED are annotated. I didn\'t list seven quasar candidates that NED considers most likely stars with mistaken photographic redshift determinations. Over time I\'ve seen many such candidates rejected when spectroscopic redshifts were obtained. None have verified so with that poor track record I no longer include these in my annotated images.

One short asteroid trail appears in the upper left quadrant. 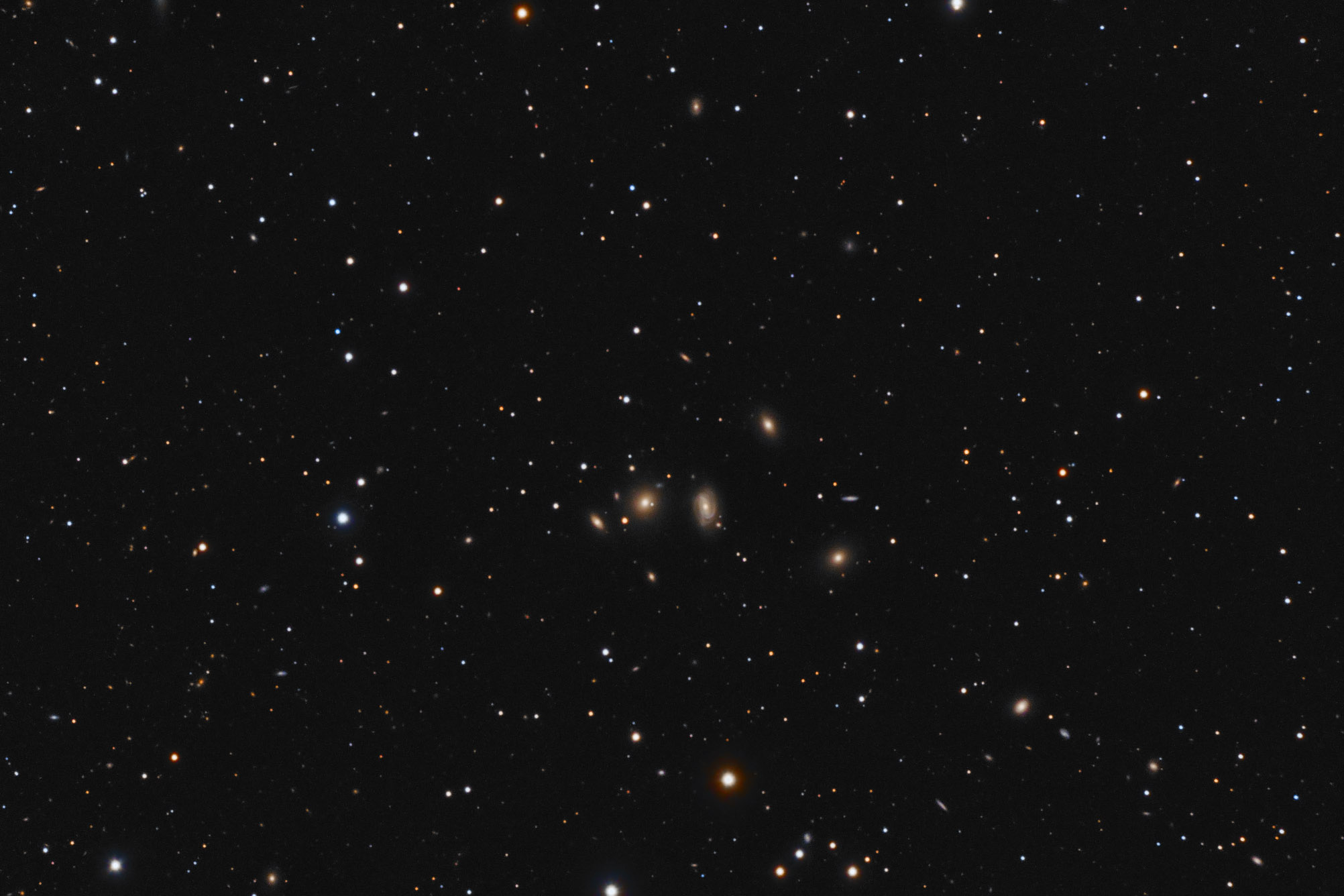 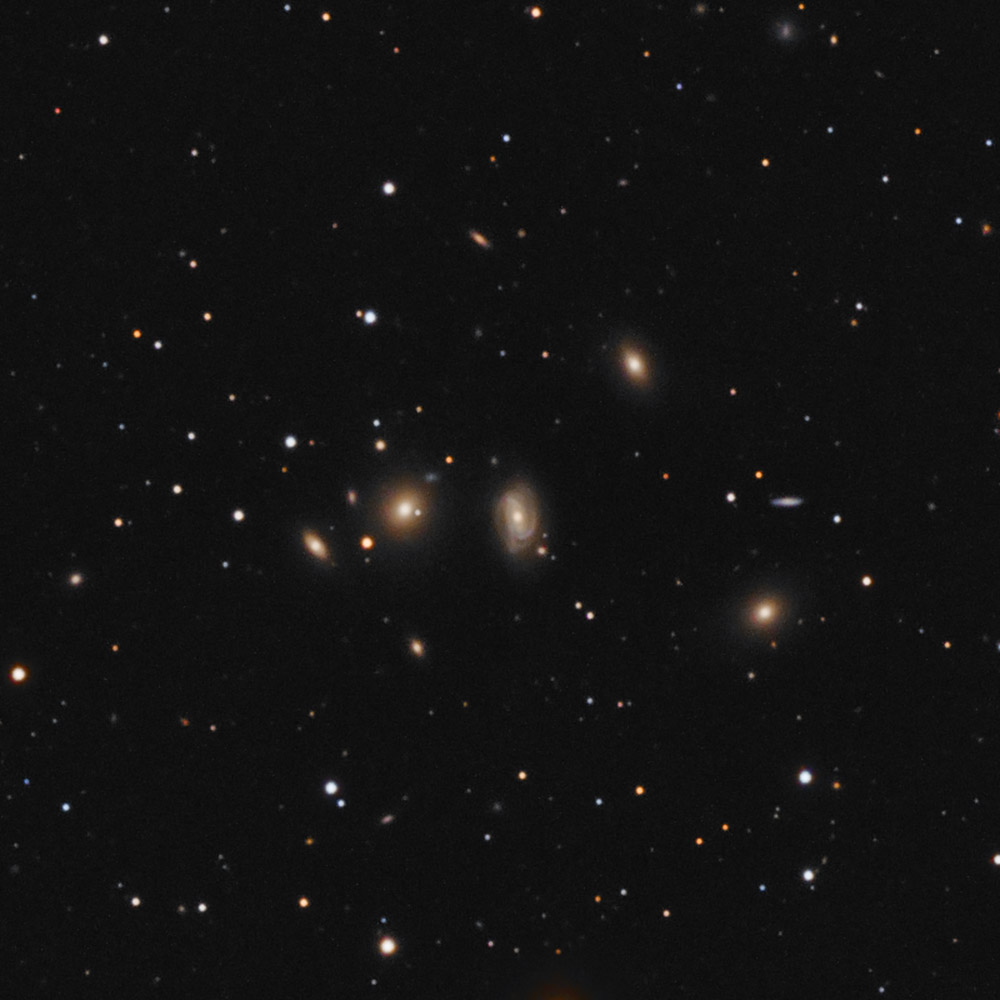 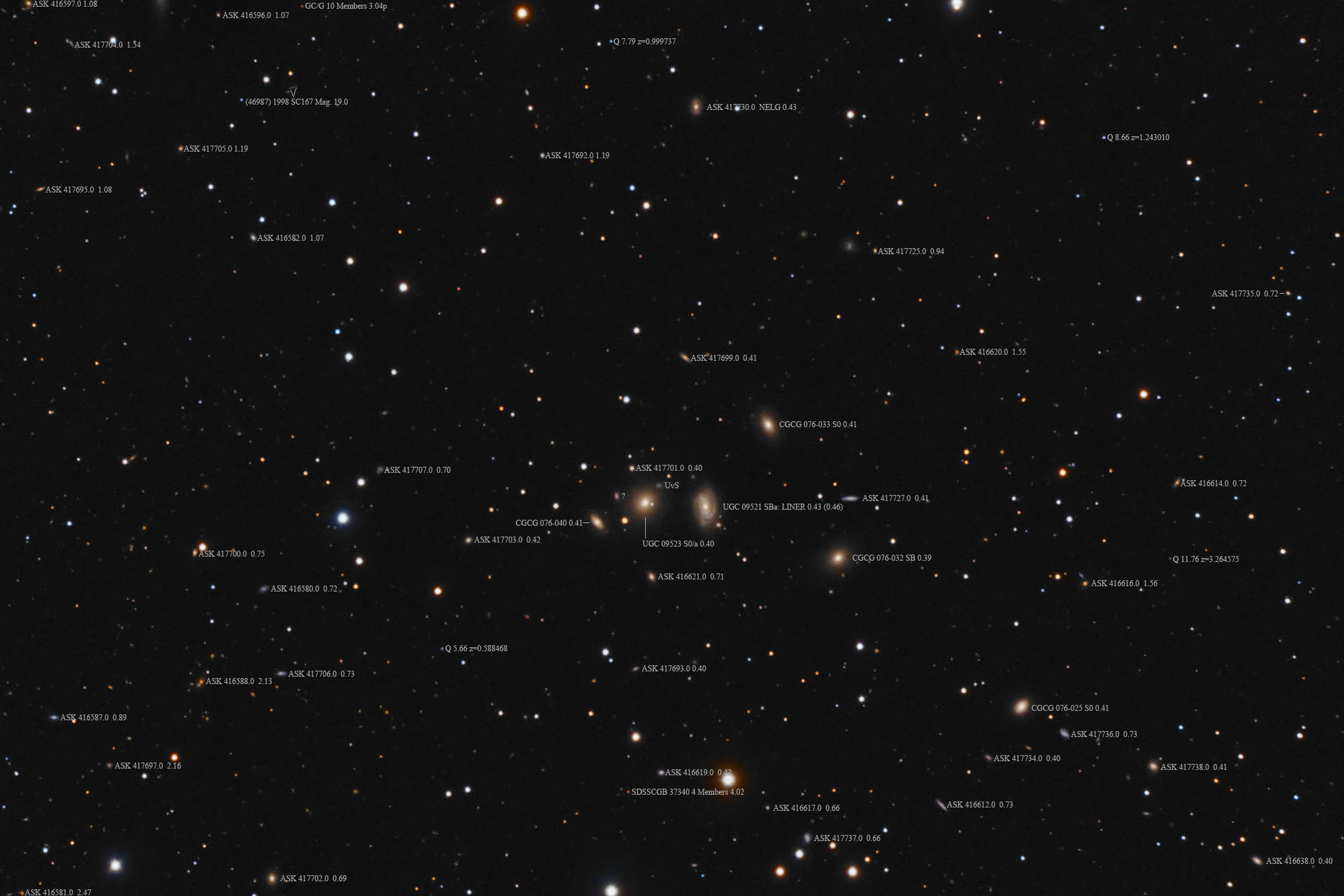