UGC 9560 and UGC 9562 are a pair of widely separated apparently interacting galaxies in the \"kite\" of Bootes. At least something has left these two in a very strange way. They are about 65 million light-years away by redshift and 75 million by other measurements. While I can\'t get into Arp\'s mind I have to think he\'d have included this pair if he had known about them. Many in his atlas are far more normal looking than this pair!

UGC 9560 has a very blue core, a warped disk and jets. The one going west-southwest above the warped disk is most obvious. While the core is blue the disk is rather white. Somewhat the reverse you normally see. There\'s a lot of hot new stars in its well-defined core. One paper describes it this way: \"This object presents very elongated outer isophotes and a conspicuous central star-forming region. Orthogonally to the major axis, on opposite sides, we see two jetlike structures.\" Besides its peculiar designation, it is a BCDG with HII emission from that blue core. BCDG stands for \"Blue Compact Disk Galaxy\". It certainly is as it is only about 17,500 light-years across assuming the closer distance and 20,000 at the further distance estimate.

UGC 9562 is even stranger looking. It is classed as peculiar with HII emission. In this case, the HII comes from the odd blue structures. Ignore those and it looks like a simple S0 galaxy. Most references refer to the blue knots as knots in jets. If jets, they do seem to arise from its core. They look like they form a ring around the galaxy though if that were the case I\'d think we\'d see them right through a rather dust free galaxy. I found nothing explaining this very strange feature. It\'s normal looking disk stretches about 18,000 light years at the closer distance and 21,000 if the more distant estimate is used. Again quite small. The blue knots extend a slightly lesser distance, 17,500 light-years or 20,000 at the further distance, the same as UGC 9560. The projected separation from UGC 9560 is only 76,500 light-years or 88,000 light-years depending on distance. Less than the diameter of our galaxy. So while they are of low mass there may still be some interaction going on. Still, this is the least distance that could separate them. We don\'t know the separation in three-dimensional space so it could be much greater.

I was also drawn to this region for its abundance of galaxy clusters. Unfortunately, the poor transparency and not great seeing we\'ve had much of the past 18+ months meant I couldn\'t go as deep as I wanted so the clusters don\'t show nearly as well as they would have under normal conditions. I\'ll just refer you to the annotated image.

It\'s time to repeat my abbreviations on annotated images involving galaxy clusters. Most will be labeled GC/G meaning both the cluster and its anchoring Bright Cluster Galaxy have virtually the same coordinates so I\'ve used one label for both. I show the number of galaxies NED has for the cluster and its diameter if available (none had that information this time). The distance to the cluster is listed first. A \"p\" means it was determined photographically rather than spectroscopically. One is labeled \"e\" as it is an estimate. If the galaxy\'s distance is the same and determined the same way it is omitted. If different it will be shown. If there\'s no distance given for the galaxy then \"na\" is used for not available. GC without /G is used when the cluster has no BCG. In such cases, a line will be drawn to the approximate position. NED usually states the cluster\'s position to +/- 15\" of arc so I have to be approximate in such cases. Otherwise, I\'ll use the BCG and put the label immediately to its right. If that\'s not possible as the label would cover up members of the cluster or overlap a previous label or be hard to read due to passing over a bright star, a line will go from the label to the BCG.

More quasars than usual are also found in the image. Since light travel time distances I use are rather meaningless at their great distance I also include the z value. This is a measure of how much the frequency of the light has been stretched to longer wavelengths. A z of 1 means the wavelength has doubled so all the light we are seeing was emitted in the ultra-violet part of the spectrum. A z=2 means the wavelength as tripled etc. The relationship of z to light travel time distance is not linear so at high z values, a large change in z can result in a rather small increase in light travel time. The z value would hit infinity at the time of the big bang so it must rise rapidly as the look back time approaches this value, ~13.7 billion years. 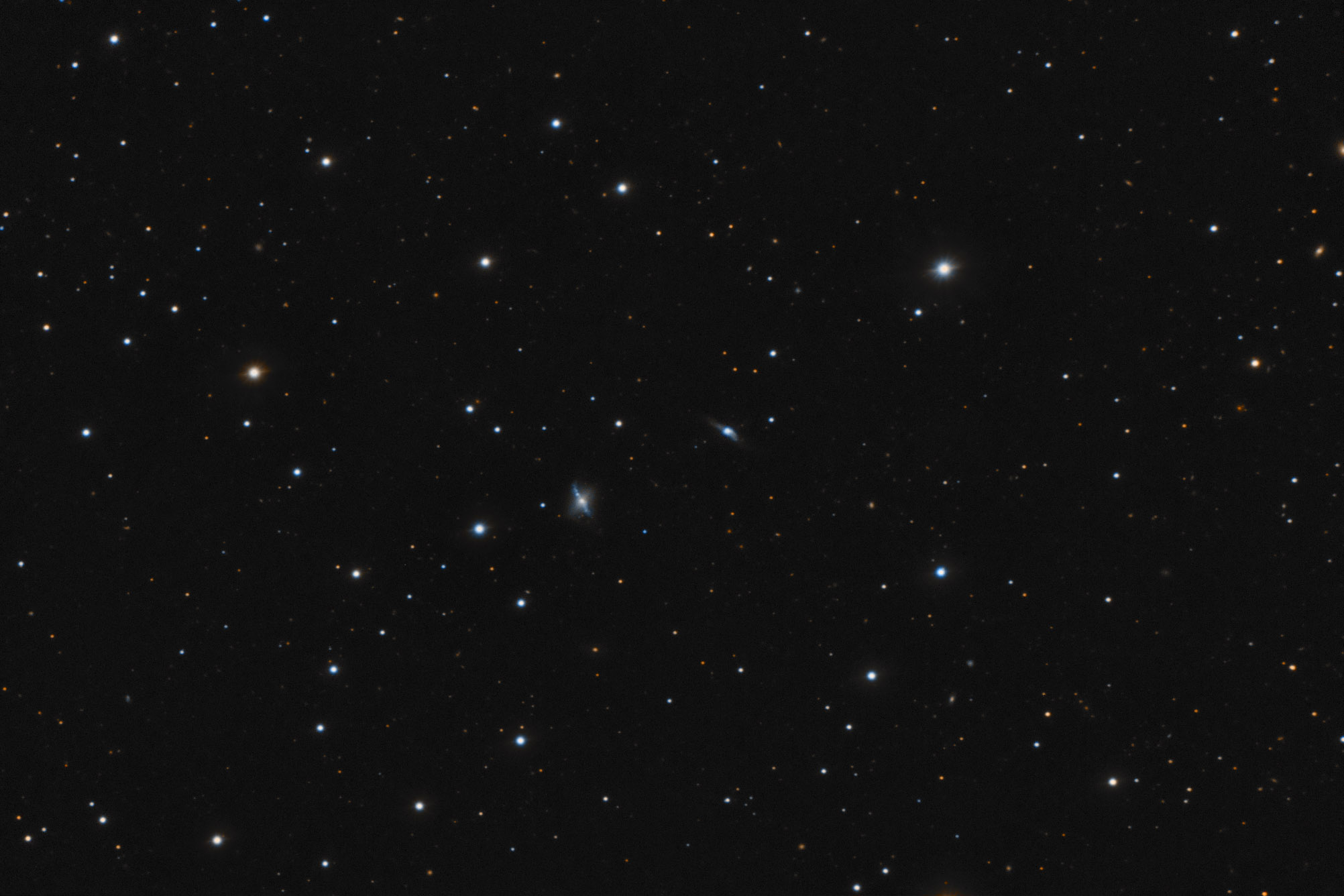 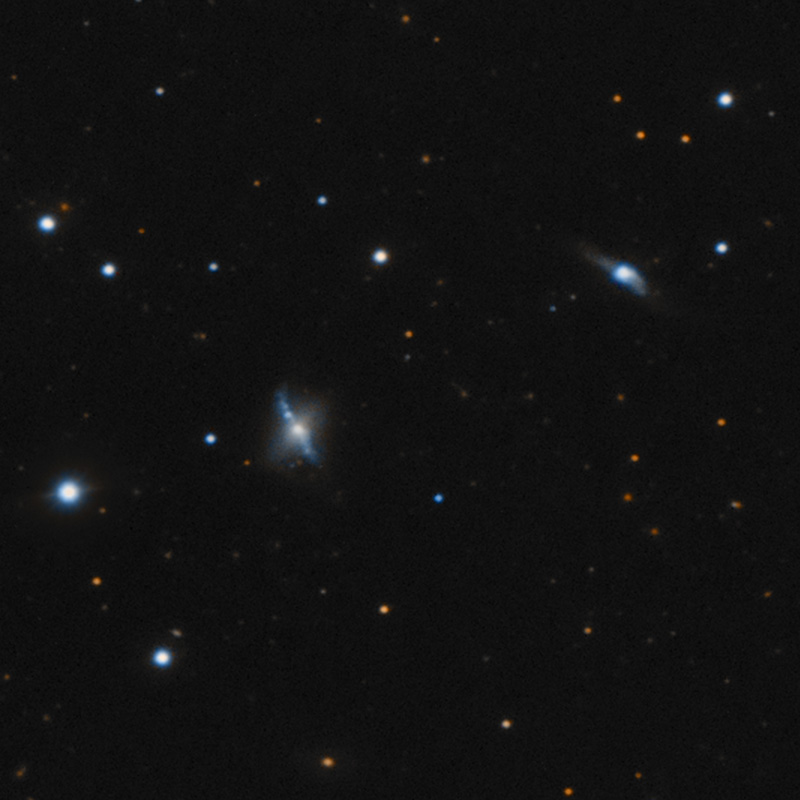 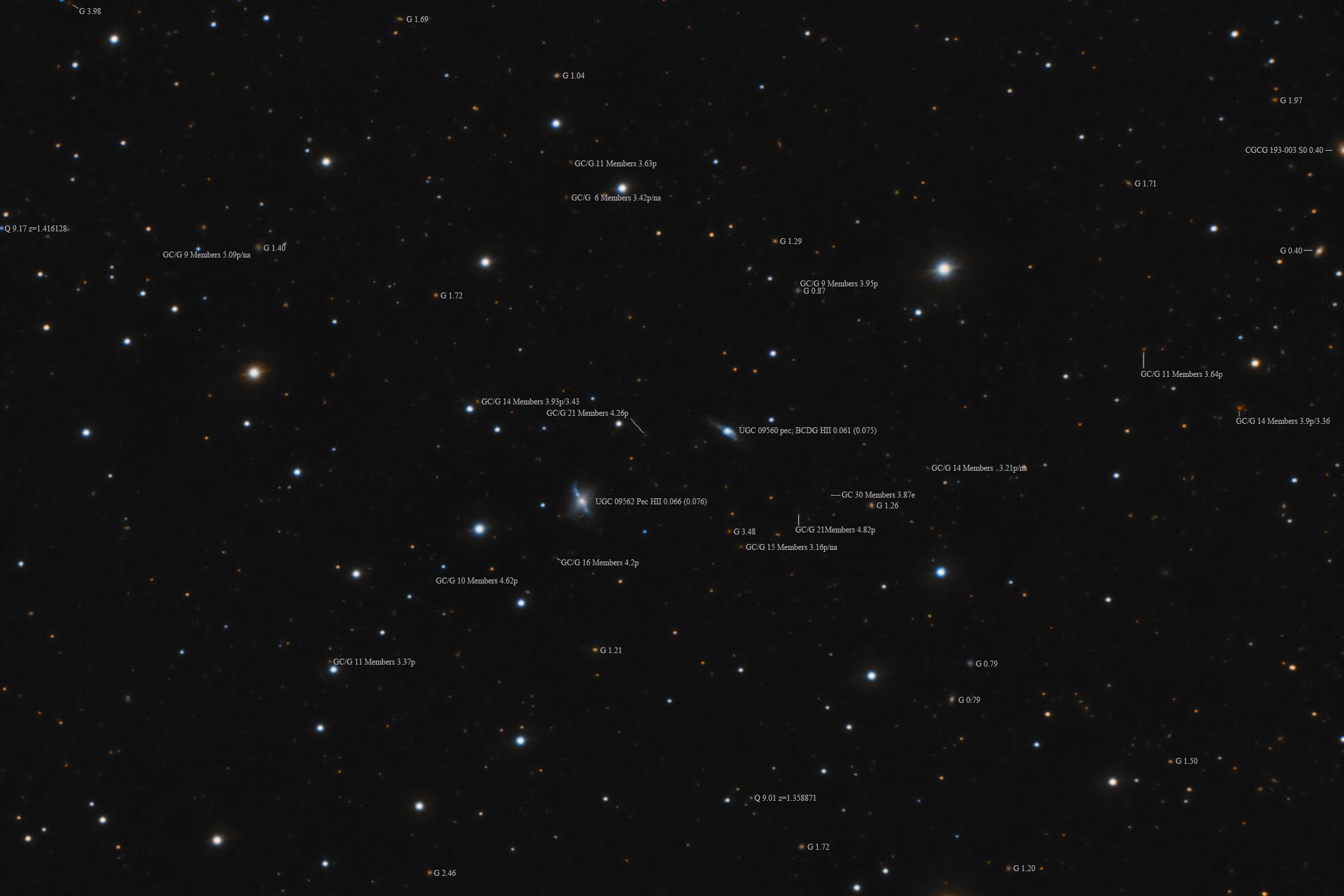