As those who have followed me for some time know, I love peculiar galaxies. The more peculiar the better. Arp compiled an atlas of 338 of them in the mid-1960\'s when they were poorly understood. But there are far more strange ones he didn\'t include. Many as peculiar or more so than those he put in his atlas. This is one of my favorites. Something seemed to prevent me from catching it for some time but finally, I was able to bag it after all these years. Why such a strange object isn\'t better known I don\'t know.

UGC 9829, located in the southwest corner of Serpens Caput is a very strange galaxy that Arp didn\'t include in his list of peculiar galaxies. It is about 380 to 390 million light-years distant depending on the method used to determine its distance. Many other galaxies in the field are also at about this distance so it has plenty of companions. But which one, if any, caused its odd tidal distortions? While it has two compact companions on the west side I\'d expect to see some distortion in them if they were involved. I don\'t see any in the field that are a likely candidate nor any in a field 5 times the size of mine. Best I can surmise is it is the result of it cannibalizing one or more of its neighbors. That might explain the odd long arm to the north. Is the cross piece of that arm a separate feature? Does the arm actually have a huge curve to it when seen from a different perspective with the sudden left turn just a matter of perspective? Is the knot in it a clue of some sort? I found no papers on this one that could shed any light on its odd appearance. Though HyperLeda considers it a multiple galaxy but no info on how this is derived. It could just mean they consider the two compact ellipticals as making it multiple or it itself is made up of multiple galaxies. They don\'t distinguish between the two. Though neither of the compacts is listed as being multiple though I\'ve found that not necessarily a good indicator about which it is.

It is classed as an Sb peculiar galaxy at NED, just not one that interested Arp or maybe he didn\'t know of it. He poured over the POSS I plates so must have come across it. Also, the annotated image shows quasars in the area and he would have found that interesting to his near quack science theory about active galaxies expelling quasars with anomalous redshift not related to distance. Though these quasars may not have been known at the time of his atlas. Also, his idea was that the redshift increased the longer ago the object was expelled which would mean those closest to the strange emitting galaxy would have the least redshift. In this case, the projected distance of two quite distant in angular measurement from UGC 9829 have the lowest redshift which might have been an issue for him. In fact, those are close enough that even in my image the fuzz of the host galaxy is visible as the quasar has so dimmed it no longer outshines its host galaxy. Also, they seem to be questionable as quasars with one listed also as a Seyfert 1 galaxy and the other as having a Broad Line Active Galactic Nuclei. 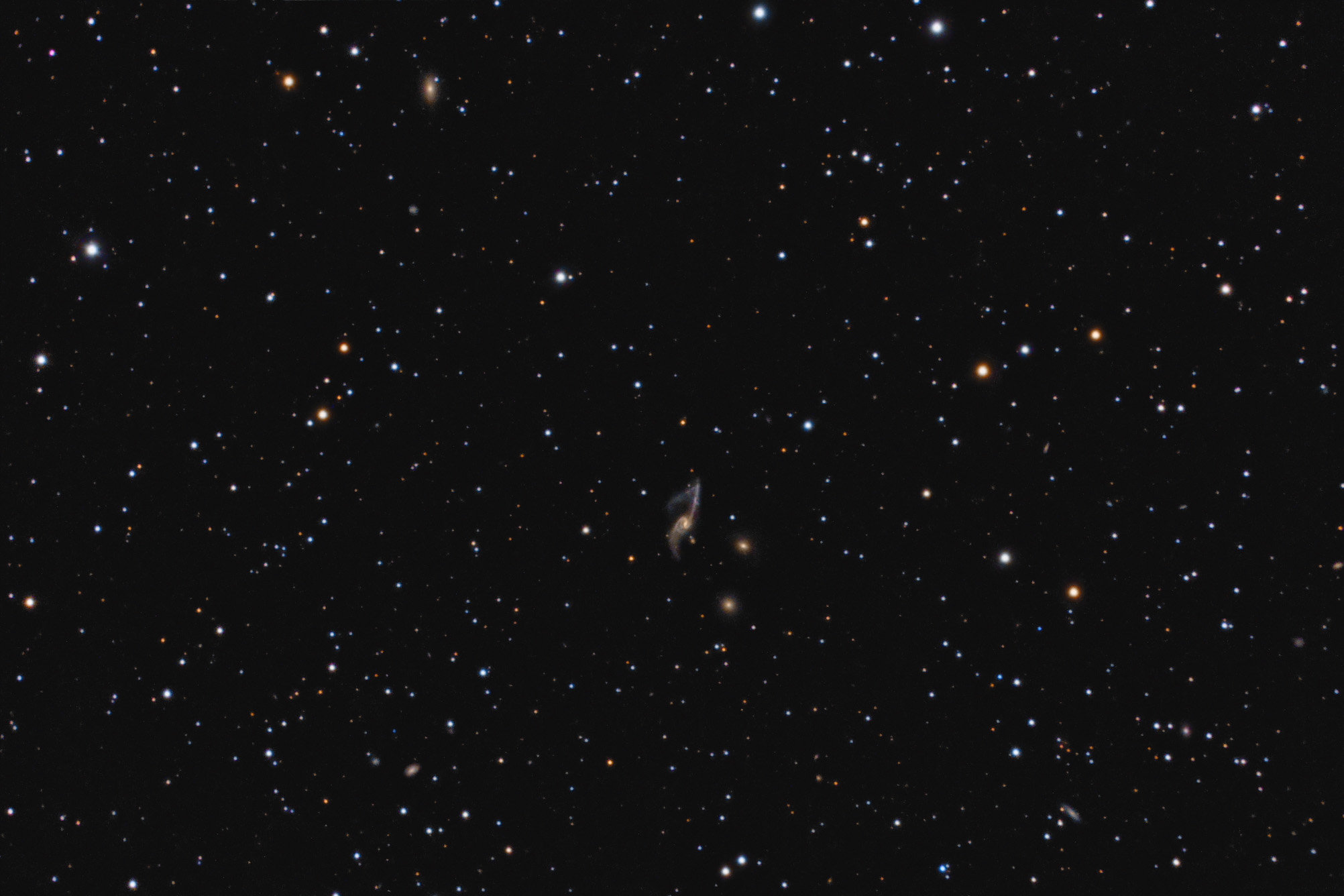 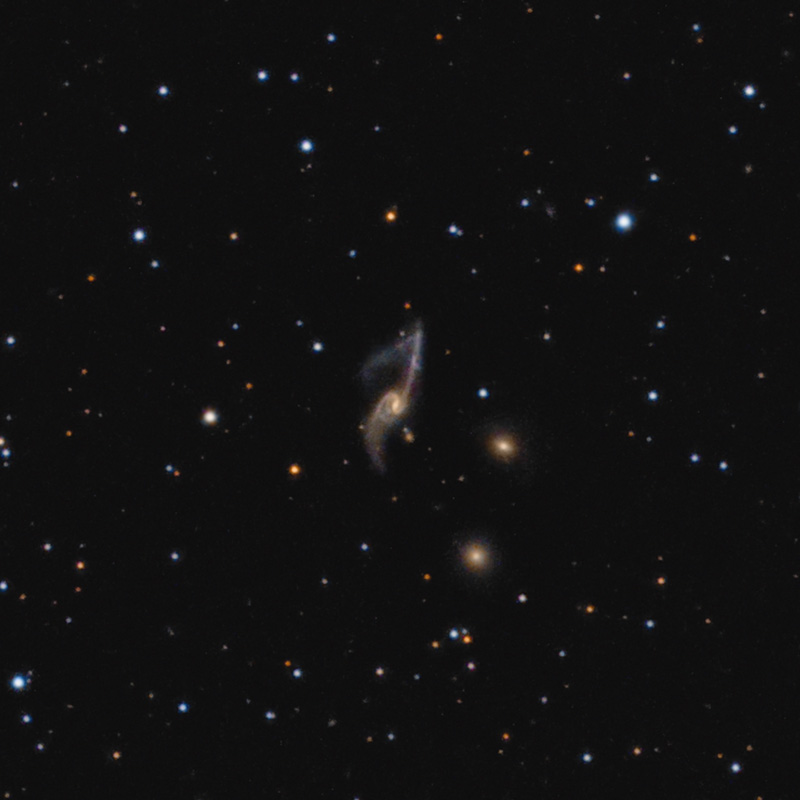 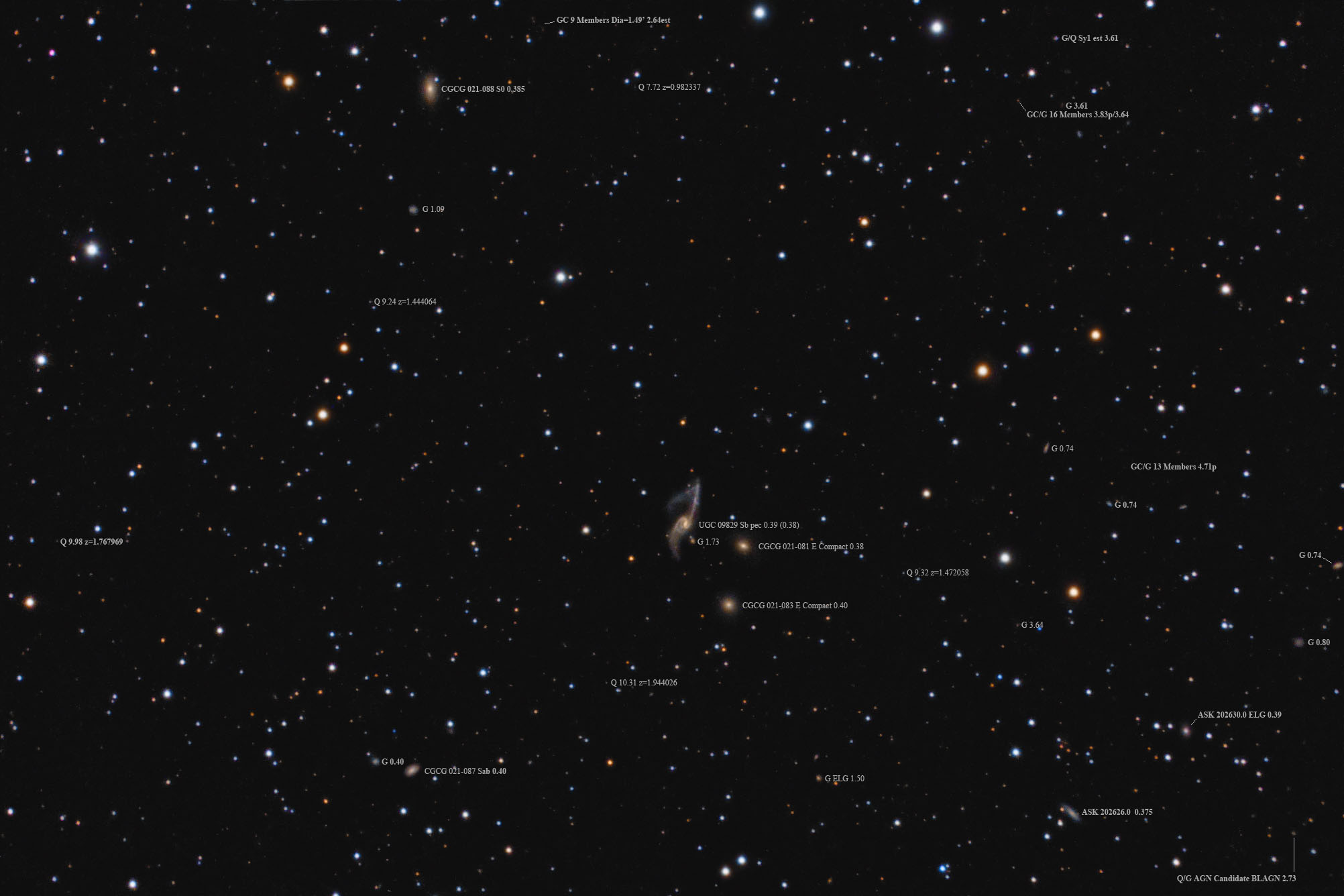