UGC 10675 is a double galaxy in Hercules about 0.8 degrees northeast of Epsilon Herculis. At least it is listed in the UGC as a double galaxy. This misled me. It turns out the two galaxies the UGC refers to are nearly 2 minutes apart. The northern one is LEDA 200340 while the southern one is PGC 059511. Since PGC 059511 is a double galaxy itself due to a recent merger I thought that is what UGC 10675 referred to. This caused me to put it lower in the field than I expected. In any case, my target was PGC 059511. One paper describes it as; \" Asymmetric spiral, with photometric parameters proper for an S0 type and presents a prominent tail pointing to the SW and a faint residual interacting feature at the opposite direction.\" The Sloan image shows a bright core with a faint elongated one to the northeast. I\'d hoped to pick that up but seeing was poor. The Sloan image is at http://skyservice.pha.jhu.edu/DR9/ImgCutout/getjpeg.aspx?ra=255.8155992&dec=31.4580668&scale=0.1980635&width=800&height=800&opt=&query= . Also, due to clouds preventing me from being at the top of my game I forgot to turn on temperature compensation making things even worse. Still, I was able to pick up the \"faint residual interacting feature\", the northeast plume that is, fairly well. Transparency wasn\'t all that great this night either so I was surprised it came out as well as it did after I heavily enhanced the entire galaxy, not just the northeast plume. Comparing my enhanced version to the Sloan image it looks to me that I didn\'t add any false features.

Above LEDA 200340 are two pairs of galaxies, only one of each pair has a redshift distance, both appear to be interacting with their companion. They are ASK 222737.0 and 221728 though thanks to my poor focus and the poor seeing the interaction is hard to see. Another for the reshoot list next year.

I\'ve listed several UvES objects (Ultraviolet Excess Source) which are candidate quasars. These usually turn out to be true quasars so I included them but left out other candidate quasars not so identified as they often turn into \"rejected quasars\" a year or two later.

East of PGC 59511 and below PGC 59529 the annotated image points out an object listed both as a galaxy and as a candidate BLAGN. Most quasars are Broad Line AGN\'s so this too is a candidate quasar but in this case, the galaxy itself is quite obvious, not at all drowned out by the quasar as is usually the case. Thus it isn\'t likely a quasar, just has some spectral characteristics similar to one.

For some reason the position of PGC 59524 is rather wrong in all catalogs I checked. They all point to a position near its southern end. NED shows a 1.25\" error circle for its position rather than their normal 0.5\" circle. Still, their position is some 7 seconds from the galaxies core, well beyond their error circle. I don\'t know why this error persists all these years. I put the label low about the declination given in the catalogs rather than centering it as I usually try to do. This galaxy received some individual processing to better bring out its detail. I rarely do this but try and disclose the few times I do it. I\'ve included a crop of PGC 059511 before enhancement for those preferring the more \"natural\" look.

As mentioned conditions were poor this night. So poor one of my green frames was totally useless. The blue frames were poor as well but barely usable. Red frames were taken in the best skies, better than the luminance frames it turned out. So color balance was a bit tricky on this one. I think I got it about right thanks to eXcalibrator. 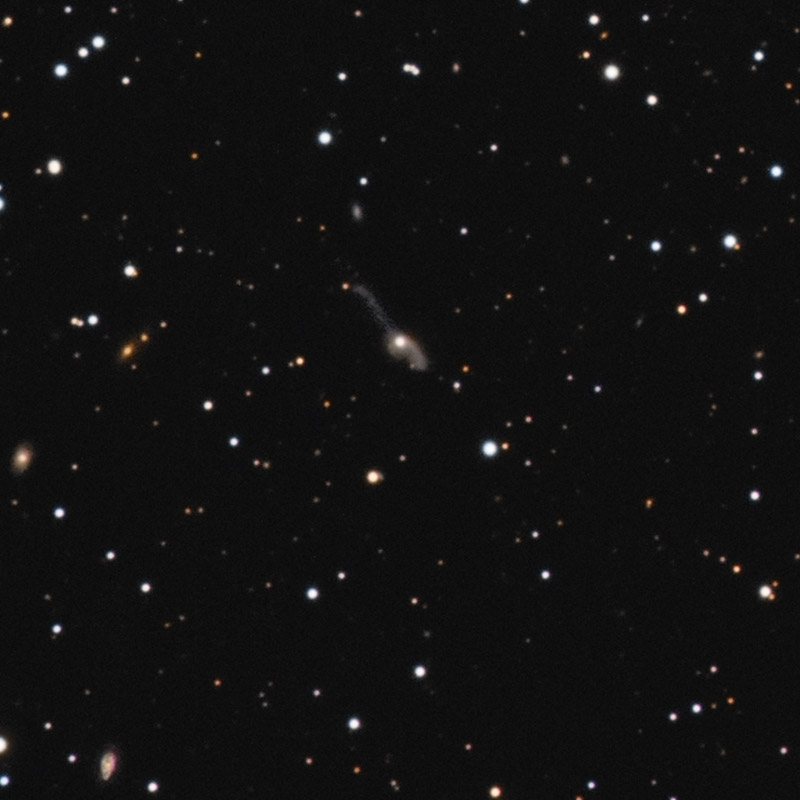 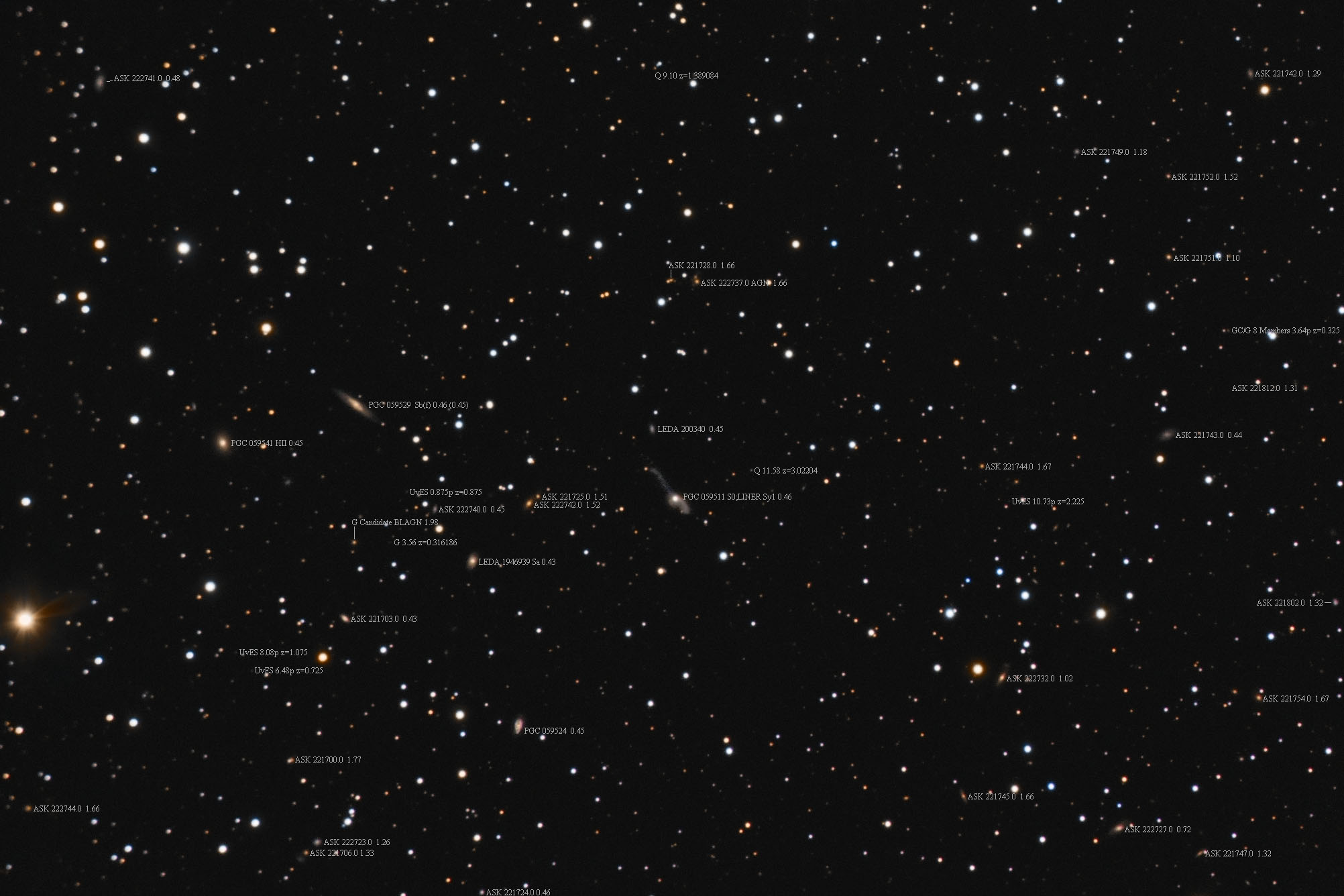 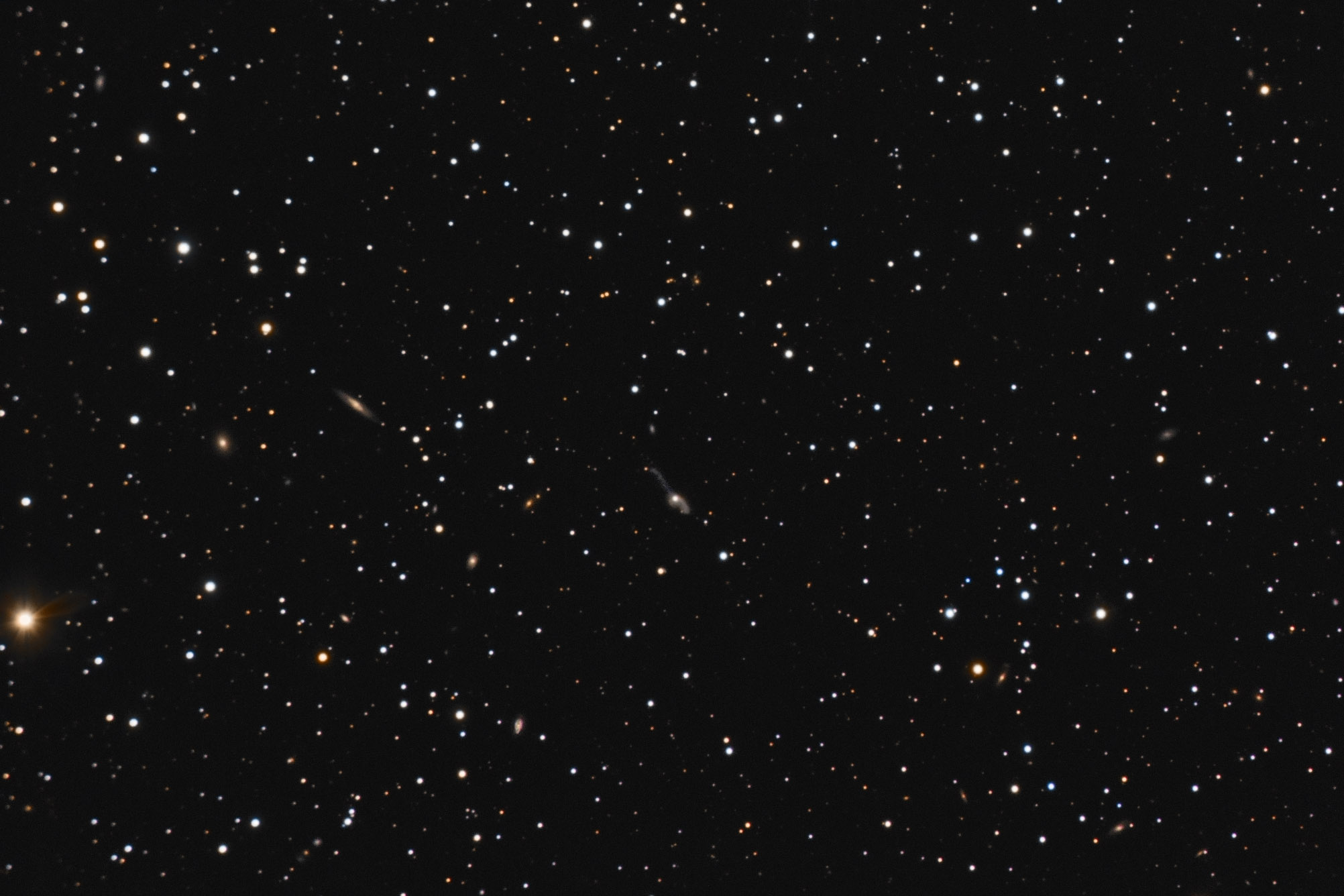