Taken Sunday morning I\'m processing this one out of order since it involves Voorwerpjes in the news of late and a pair of galaxies well positioned in the sky right now for others that want to put more time into it to better bring the green cloud out.

UGC 11185 is a pair of interacting galaxies in northwestern Lyra. The right edge of my frame is only a couple minutes of arc into Lyra from Hercules. This interacting pair had long been on my to-do list when finally I had a good night on August 9 that allowed me to get the resolution I\'d been waiting for. I\'d totally forgotten that it was one of the Voorwerpjes galaxies announced a few months ago. Only when I moved it to my processing computer did it get flagged as falling into that category. So I immediately compared the green frames to the rest and noted a blob not seen on the red or blue frames right where the HST image showed the most green. So instead of putting it into the processing queue I immediately processed it today. The Voorwerpjes popped right out without effort at all thanks to the better than average seeing I had. The HST image shows some on the western side as well as the eastern side but other than a very slight hint of green there I didn\'t resolve that, unfortunately. Another oddity is the color of the galaxy\'s core. It is more yellow than I\'ve ever seen in any other galaxy. The HST shows no green in that area but excess green would turn a reddish galaxy yellow.

This pair is about 550 million light-years from us. NED lists both as being UGC 11185 but other sources, such as SIMBAD list only the southern galaxy as being UGC 11185. The MCG lists the southern galaxy as MCG+07-37-030 and the northern one with the Voorwerpjes as MCG+07-37-031. LEDA also lists them separately with LEDA 61664 for the southern and LEDA 61662 for the Voorwerpjes containing galaxy even though it is east of the other. On the other hand, they are a double galaxy in Zwicky\'s catalog as I Z2 205 Both are listed as Sy2 galaxies.

Voorwerpjes are thought to be gas well outside the galaxy left over from one it is digesting. The process fired up the black hole at its core into a quasar whose light so excited the gas that it is still glowing millions of years after the quasar has faded away, or down to Sy2 status in this case. You can read more about this and see the HST image of this and the other 7 at http://apod.nasa.gov/apod/ap150404.html . The original HST image of UGC 11185 showing a lot more detail than I can is at: https://www.spacetelescope.org/images/heic1507h/ . The huge plumes, especially around the northern galaxy is proof the interaction is rather recent. The pair stretch over 260,000 light-years end to end including the plumes. The southern galaxy itself is only about 60 million light-years in size and the northern one ignoring the plumes and Voorwerpjes is only 18,000 light-years across. Just its core seems to remain with everything else thrown out into the plumes.

Since OIII is usually thought of as Cyan having a wavelength of 500.7nm for the strongest OIII line. So why is the Voorwerpjes green rather than cyan? My filters are designed so the OIII line falls about equally in green and blue to give that cyan color. But the answer is that this galaxy at just over a half billion light-years distant is moving away from us so fast the 500.7nm line is seen from earth at 521.3nm. That is fully within my green filter and completely outside my blue filter\'s skirts. Thus only the green filter sees it. HST uses narrowband filters that are tunable so can catch the OIII lines even though for fixed filters they\'d be outside the passband. They then just assign that filter to green forcing the color. But since it is what standard LRGB filters also see I suppose it makes sense even though the true color would be a slightly bluish green color rather than pure green either filter system renders it. On the other hand, Sloan images assign green to blue for some reason, probably to make room for three IR bands plus red. Thus Voorwerpjes are blue in Sloan images, including the first found, Hanny\'s Voorwerp. Turns out \"true color\" isn\'t all that \"true\" after all.

Since this object is still well positioned for imaging right now I pushed this to the front of the processing line for immediate posting. It\'s not often something like this is within reach of amateur equipment.

No annotated image as NED had no redshift data on anything in the image but for the two colliding galaxies. 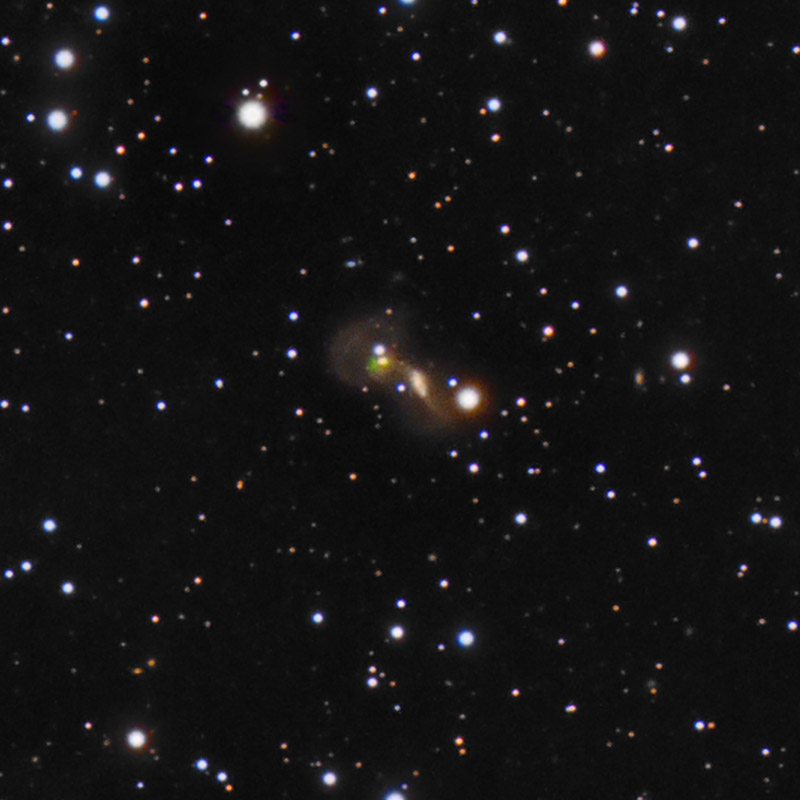