The WBL 687 galaxy group is a small group of 3 galaxies in Pegasus just west of the northeastern star of the Great Square, Beta Pegasi. Redshift puts the group about 420 million light-years distant. The group consists of UGC 12191, UGC 12193 and CGCG 474-032. Redshift also shows UGC 12198 to be of about the same redshift. Out of my frame to the north, UGC 12194 is a similar galaxy with a very slightly greater redshift that puts it 430 million light-years distant. These 5 likely constitute the PPS2 007 group. Though it is centered just above NPM1G +27.0631 which has no redshift but appears to be more distant so likely this is just coincidence. Still, I\'d like to know more about this galaxy as it appears to have a plume to the southwest yet no interacting companion is to be found. Is it the result of a merger?

UGC 12193 is listed at NED as an SB(s)bc spiral and is seen fully face on. It is slightly larger in angular size though looks much larger since it is seen almost fully face on. Its size works out to be 175,000 light-years in diameter. There were no non-redshift distance estimates for it.

The third, much smaller, member is CGCG 474-032. It is a rather normal sized spiral at 65,000 light-years in diameter. It appears to be an old, dying spiral by its mostly red color. It stands in rather stark contrast to the vibrant star formation in the larger spirals evidenced by their strong blue color.

The two UGC galaxies are separated by only 110 seconds of arc. If they are at the same distance that would mean they could be as close as a quarter of a million light-years. I\'d expect some tidal distortion though if this is their first time close that might not show as yet. Still, I think it likely there\'s more separation than this between them. Of course, they might be unrelated though I find this unlikely.

There\'s not a lot on this field at NED. As such, I broke my usual rule and annotated all galaxies at NED in the field, not just those with redshift distance. I didn\'t include those that are listed as UvS sources as most are stars and separating the two nearly impossible with more than 400 listed in this image to sort through. 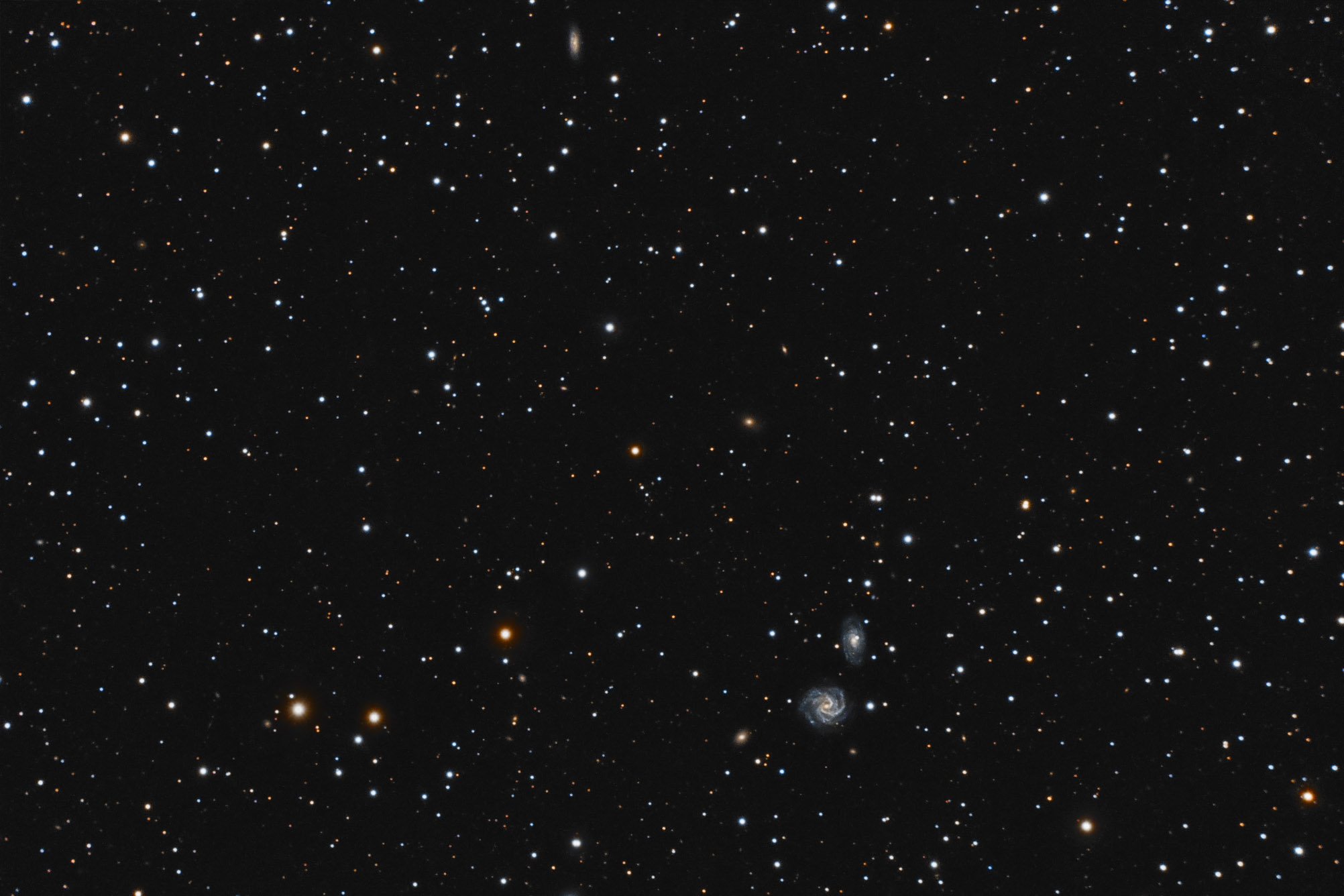 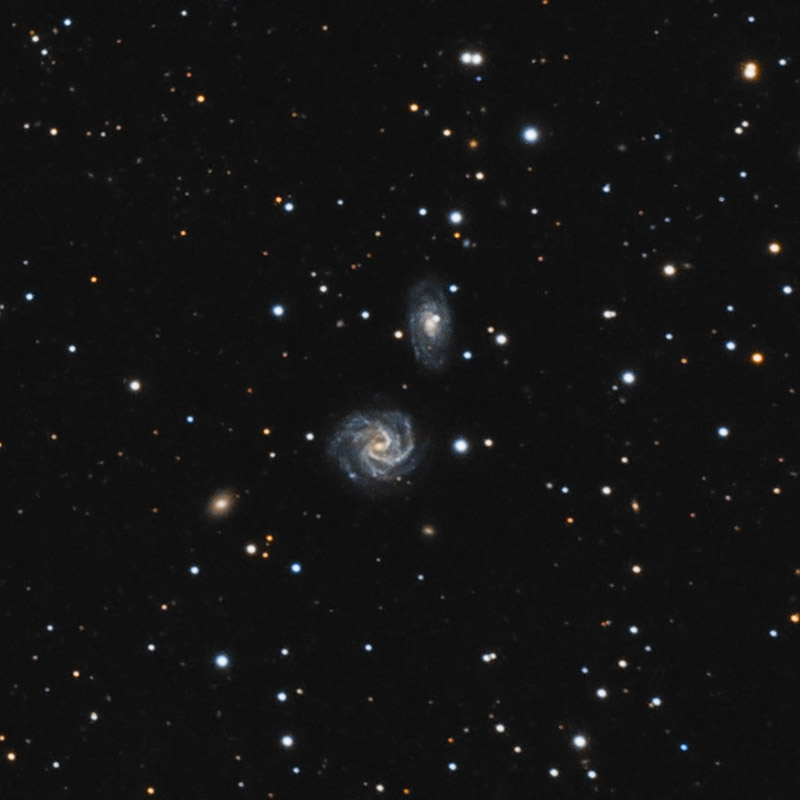 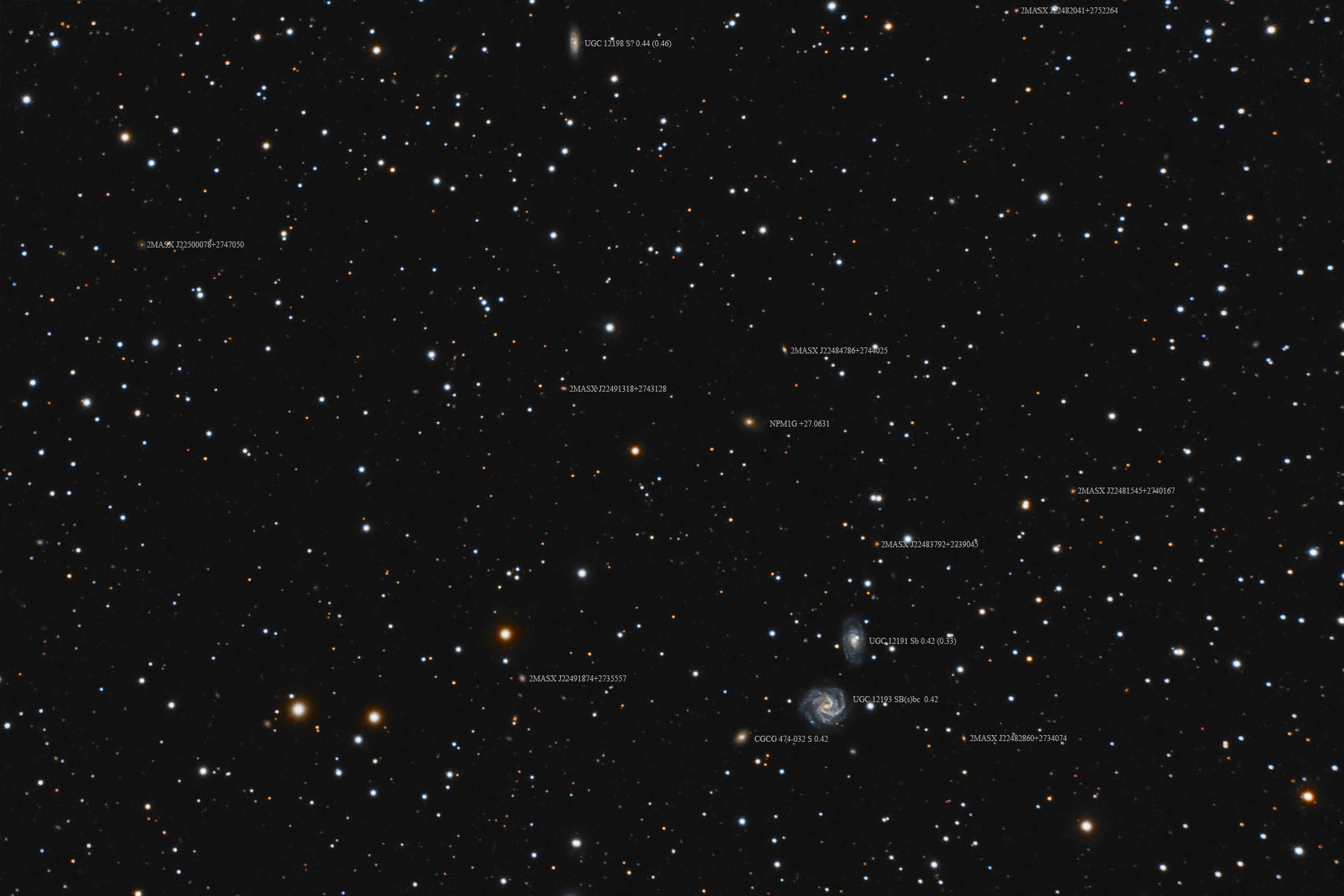