Mrk 331 is a Luminous InfraRed Galaxy in the Great Square of Pegasus about 240 million light-years distant by redshift, 160 million light-years by Tully Fisher and 250 million light-years according to the HST website. NED classifies it as Sa;LIRG HII; Sy2. But it has all the characteristics of a starburst galaxy yet that isn\'t mentioned at NED. The HST studied it trying to determine if the starburst activity was due to it being the product of a recent merger but couldn\'t confirm that was the case. Arguing against this being the result of a merger is that it is rather undisturbed. The original entry by Markarian does say it has a small jet to the north but neither my image nor the HST image shows this \"jet\". Not having access to Markarian\'s data I don\'t know what caused this comment. Assuming it is 250 million light-years distant it is some 80,000 light-years across. A reasonably sized spiral. In my image, it has a red side and a blue side. The HST image shows the red is due to many fine dust lanes that merged into one red blob at my much lower resolution. The relatively dust free side shows blue making for an odd color contrast to this galaxy.

The HST image and more information on this galaxy can be seen at: http://hubblesite.org/image/2313/news_release/2008-16 There you will notice they call it UGC 12812. According to NED, this isn\'t quite correct. NED shows UGC 12812 as a double galaxy with the near edge on spiral to its west. Mrk 321 is listed at NED as UGC 12812 Notes02 indicating it is one of two galaxies. The one to the west is simply noted as UGC 12812. Darned confusing if you ask me.

UGC 12812 (to use NED\'s name) is listed as Sc with HII emission. It is also listed as 2MFGC 17903 indicating it made the 2 micron flat galaxy catalog. The HST page refers to it without name saying it has lots of star clouds. They don\'t give a distance for it. Redshift puts it very slightly closer than Mrk 331. The difference is likely due to relative velocity and they are really about the same distance. If so then the starburst activity in Mrk 331 and the many new star clusters in UGC 12812 may be due to interaction between them in the recent past. Assuming this is the case it is some 70,000 light-years across.

Sandwiched between these two UGC 12812 galaxies is MCG +03-60-033. This very blue galaxy isn\'t classified by NED. I\'d say it\'s a very distorted spiral. Much like our Magellanic clouds. It too is full of new blue star clouds. This may be a 3-way interaction as its redshift is between that of the two UGC 12812 galaxies. Indeed, the three form a triple known as HIPASS J2351+20. This is a Parks Radio telescope survey object that covers all three galaxies. Its irregular shape makes its size hard to measure but I put it at about 35,000 light-years in size. It has an arm that seems to be reaching out to the edge on UGC 12812.

The only other galaxy with redshift data is the small dense blue galaxy west of the trio of galaxies. It is [WGB2006] 234842+20170_d and lies about 1 billion light-years distant or 4 times further away than the trio. I measure it at about 65,000 light-years in size. Obviously, it has no connection with the others.

Nothing else in the image has redshift data so I didn\'t prepare an annotated image.

Conditions were rough for this one. Even after several nights of trying only one blue frame was usable. With objects this faint that may have hurt the color balance a bit but it appears reasonably close to the pseudo color HST image. Narrowband filters were used for the HST image and prepared in such a way to make a \"sorta\" true color image. That makes judging my color accuracy pretty much impossible but I think it not significantly far off the mark. The poor conditions did limit my ability to pick up faint plums but since the HST image was looking for them and not finding any it appears I got lucky and didn\'t miss any I\'d otherwise have picked up. 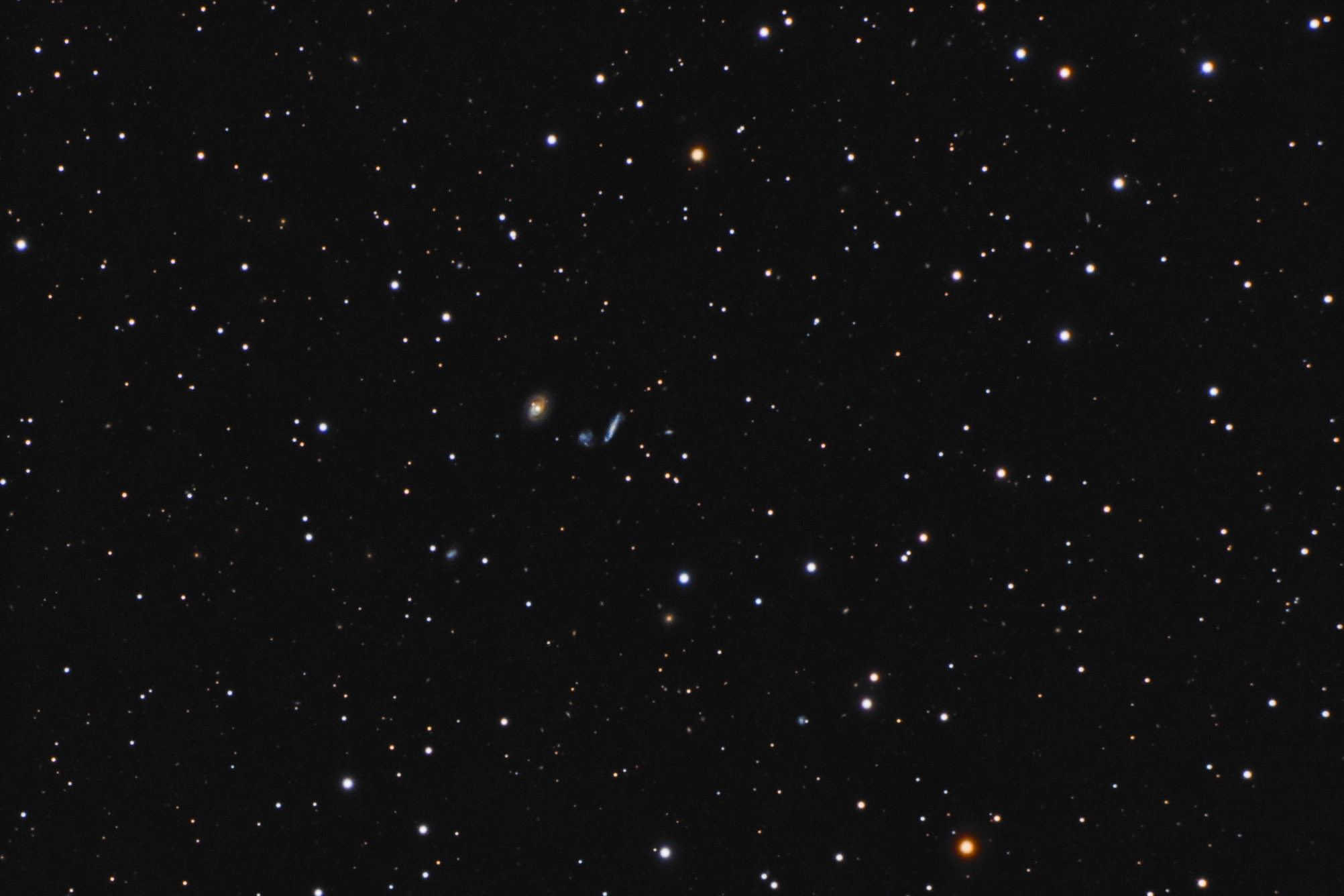 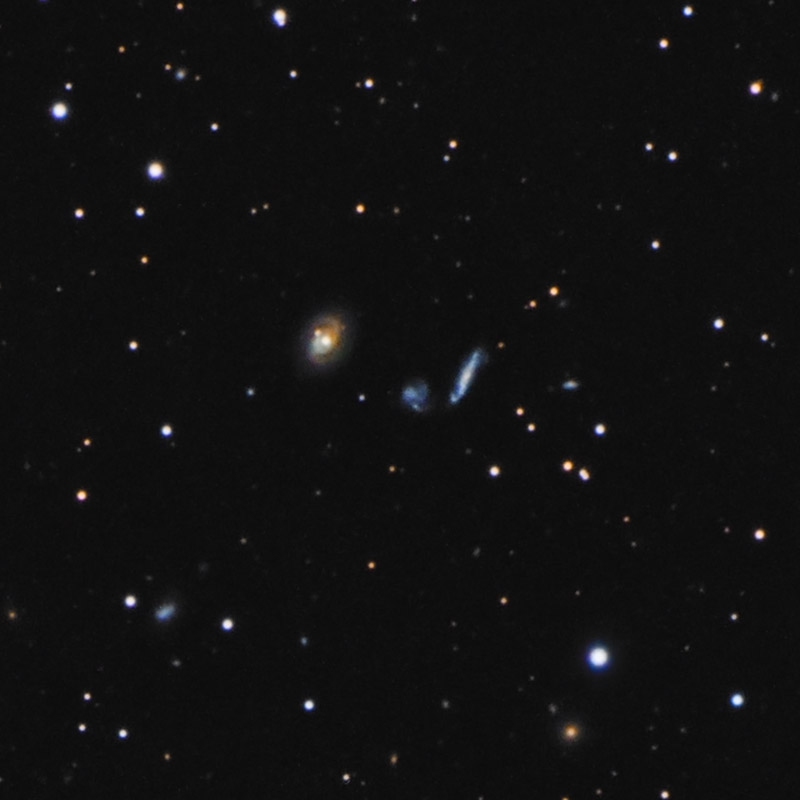 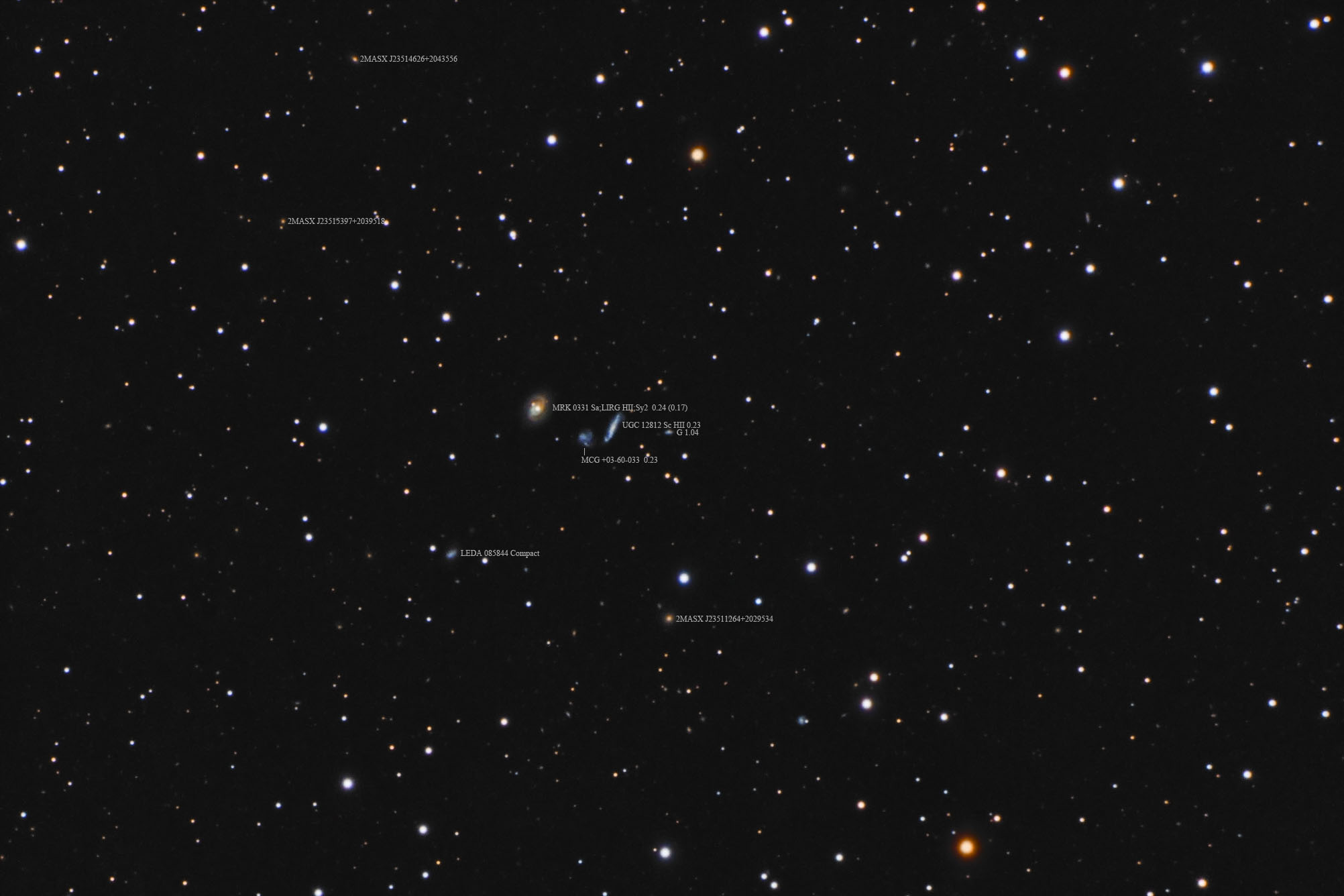