The Cancer Galaxy Cluster is far larger than my field of view. It is about 220 million light-years distant and in the constellation of Cancer of course. I chose to center on NGC 2563 a large S0 galaxy. The annotated image shows the redshift distances to major galaxies in the cluster which are obviously altered by the relative motion of the about the cluster\'s center of gravity. The cluster contains some 100 galaxies according to NED but no angular size is given. Suffice to say it is quite a bit larger than my image.

While I centered on NGC 2563 my main target was UGC 4332 to its right. NED classes it as SAdm and puts its distance in line with it being a Cancer Cluster member. The m indicating something is odd about this one. It sure is. UGC 4332 is one strange galaxy. At one time it was considered a polar ring galaxy but most now say that\'s not a sure thing today.
http://www.springerlink.com/content/f66u183818771544/

The dust lane is very strange cutting across the edge of one spiral arm. My first impression was this is two near edge on galaxies one superimposed over the other. The closer having an intense dust lane. The upper right part being the closer galaxy with a low surface brightness but dense dust lane while the lower and main arms belong to the more distant one. I found no one suggesting this, however.

The Sloan image seems to show a second, much fainter, dust lane above and parallel to the first. The densest part of it is seen in my image as well. Could this be the dust lane going around to the other side of the faint but dusty galaxy? OK, I\'m hung up on this being two galaxies rather than one. I did find one amateur (name unknown) who suggests it might be a spiral superimposed over an elliptical. That doesn\'t explain the tilted dust lane in relation to the plane of the disk. Is it possibly three galaxies, an elliptical and low dust edge on about to merge but still rather undistorted and a foreground super dusty but faint galaxy? In any case, it sure looks strange. A dust band not in the plane of the disk is difficult to explain. Yet I find few are trying.

There was a very blue, small, distorted galaxy northeast of NGC 2563. I was disappointed to find it wasn\'t in NED though immediately west of it was a far fainter starlike galaxy that was cataloged. Again a very blue galaxy is somehow overlooked. This is a common event I\'m finding. Wish I knew why. It is noted with a question mark and line to the blue galaxy. If I had put the label immediately right as I normally do it would have covered the starlike galaxy that was cataloged.

The lone asteroid is 5009 Sethos. It\'s naming citation reads:
\"Named after the Egyptian pharaoh Sethos I (reigned 1304-1290 B.C.) of the 19th dynasty. His father was Ramses I, who reigned for only two years. Sethos I built the Great Hall of Columns of the Amun temple in Karnak and the Osiris temple at Abydos. Sethos I was the father of Ramses II.\"

The annotated image shows catalog names for all objects with redshift data and are under 300 million light years distant. Those over this I didn\'t consider true cluster members and indicated them only by their distance. I was rather surprised to find no quasars in the field though one is just outside the field to the east.

This image was taken automatically right after the NGC 974 image. That one lost both blue frames due to clouds and haze. This one had a similar problem with the red frames. Since red light doesn\'t scatter as bad as blue it was sort of usable. Still, faint red was totally lost with the red limiting magnitude a good 1.5 magnitudes brighter than that of blue and green. Thus the dust lane of UGC 4332 is black for the most part rather than red as the Sloan image indicates it should be. That also means the outer, faint parts of the galaxies also likely lack red they should have. Another for the retake list. 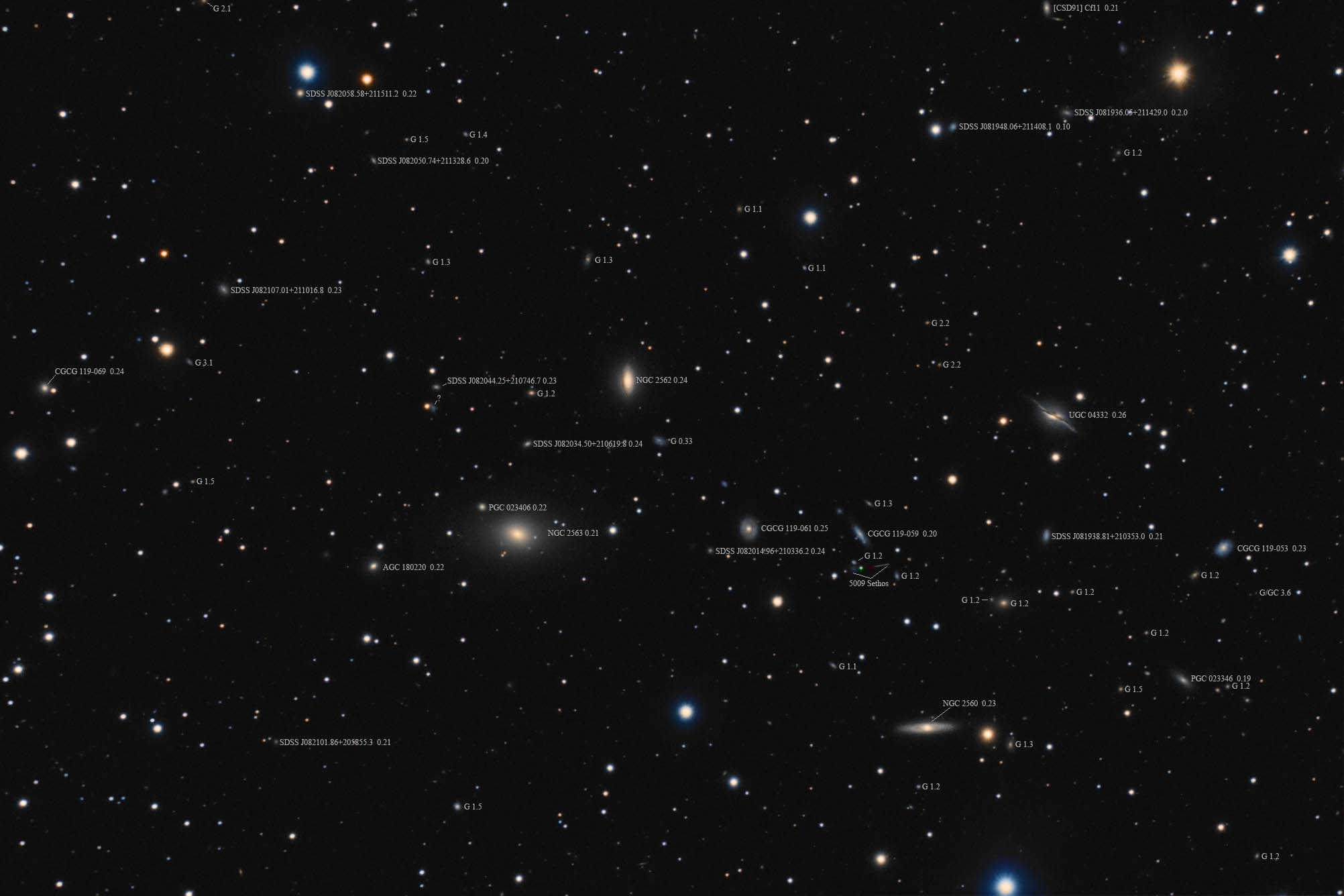 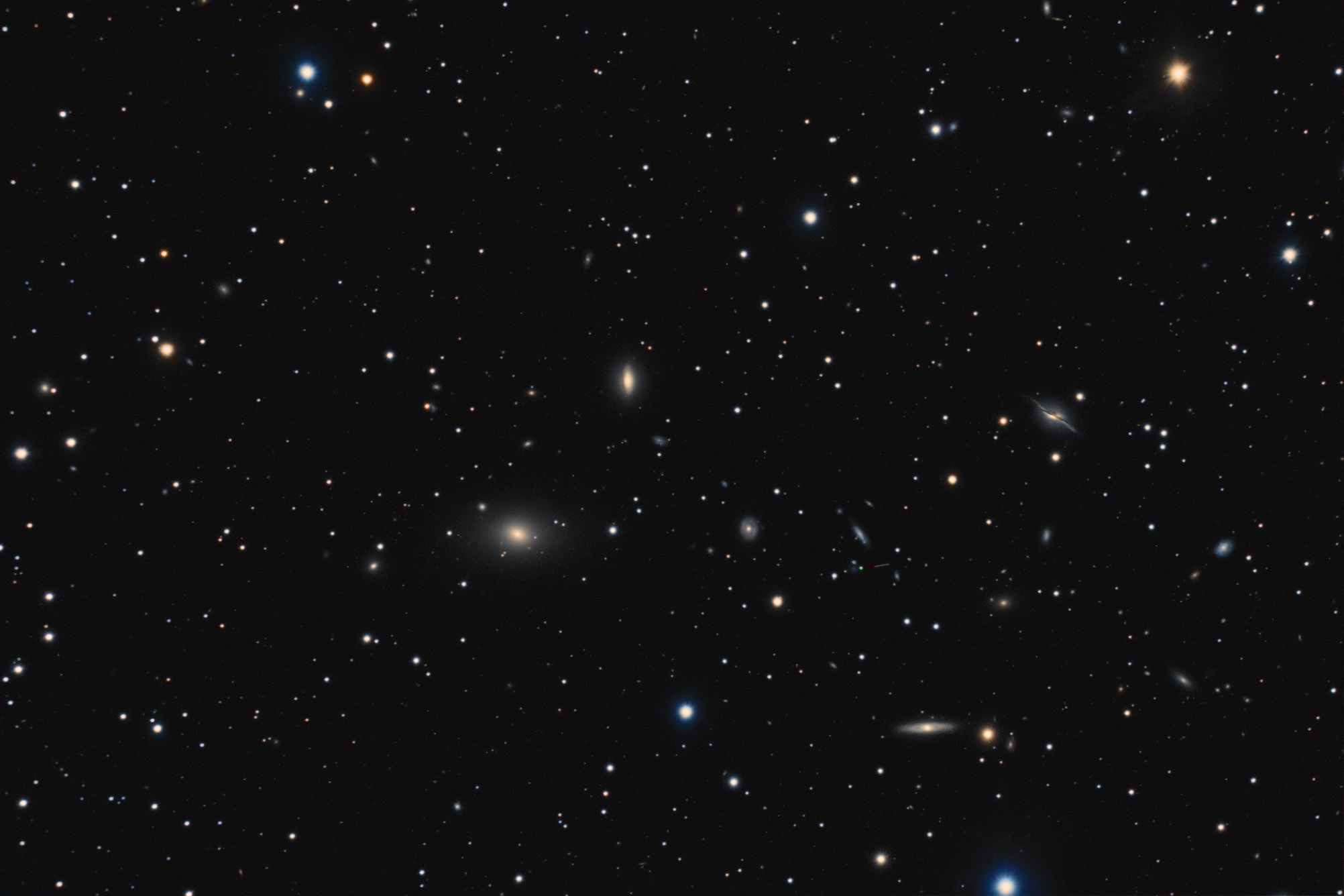 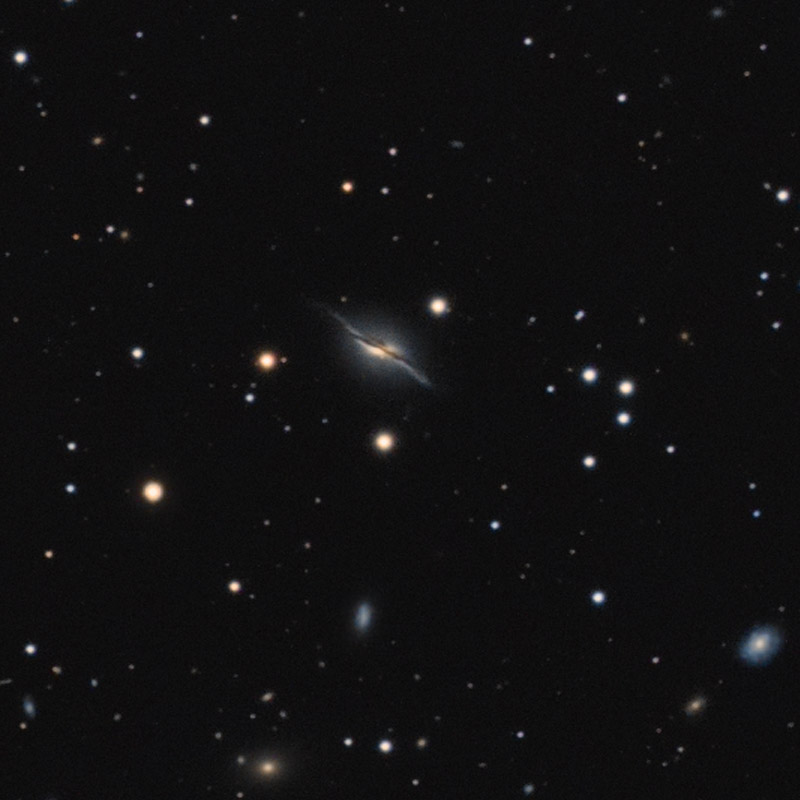