VV 697 is a quadruple galaxy though NED only catalogs 3. Is the 4th related? Wish I knew.

At the center of the 4 are two spiral galaxies, one, a near edge-on somewhat obscured by the face on. The edge-on galaxy is the uncatalogued one. NED does show a UVs 7 seconds to its south with an error circle of 1.45 seconds and no redshift, but this appears to be a piece of the middle galaxies spiral arm. The mystery galaxy does appear to be behind the spiral. How far behind I can\'t tell. Considering how much redder its core is than the other galaxies I am thinking it likely is quite a bit more distant assuming the reddening is due to gas and dust beyond the others. The other three constitute VV697 as NED sees it. The center one, partly hiding the unknown galaxy is VV 697 NED 02. NED lists it as a starburst spiral with HII emissions. It appears to be the center galaxy. Redshift puts it at 755 million light-years away. The galaxy to the northwest is VV 697 NED01. To me, it looks like an SB(r) galaxy but NED just calls it Peculiar and notes it has a Seyfert 1 core. Redshift puts it at 747 million light-years. It has large plumes so may be interacting with its companion to the east. A bar of stars appears to connect the two at their southern ends. The galaxy to the south is VV 697 NED03. NED lists it simply as a spiral with HII emission. Redshift puts it at 753 million light-years. The redshift differences are immaterial and likely just reflect relative velocity rather than real distance differences. It is safe to say this group is about 750 million light-years distant and let it go at that. This group is in the northeast corner of the Great Square of Pegasus not far from Alpha Andromedae. The PGC numbers for the three galaxies NED1 through 3 respectively are 72911, 72910 and 72909.

There is little on the rest of the field. The thin edge-on galaxy to the northeast is 2MFGC 17969. So it is indeed an official \"flat galaxy\", just not as flat as those in the Flat Galaxy Catalog. The fuzzball galaxy in the lower left corner is the IR galaxy 2MASX J23565508+2521263. A handful of other fainter galaxies are listed in NED. None with much useful information, nearly all from the 2 micron survey. The exception is GALEX 2667408633447319057 which is a quasar candidate but has no redshift distance. It is listed as a UvES which often turn out to be quasars. To find it follow the line from VV697 through the flat galaxy and continue about the same distance. You should come to a very blue star that\'s rather bright. It is above a much brighter orange star and below a blue-white star also brighter than the quasar candidate but fainter than the orange star. It\'s the bluest object in the area.

This field has been covered in the DR8 Sloan release. I\'ve attached an image from that release of this area. But the data hasn\'t, as yet, been incorporated into NED. When it is I imagine some of the questions will get answered. This grouping was another suggested by Sakib Rasool.

One green frame was lost to clouds. 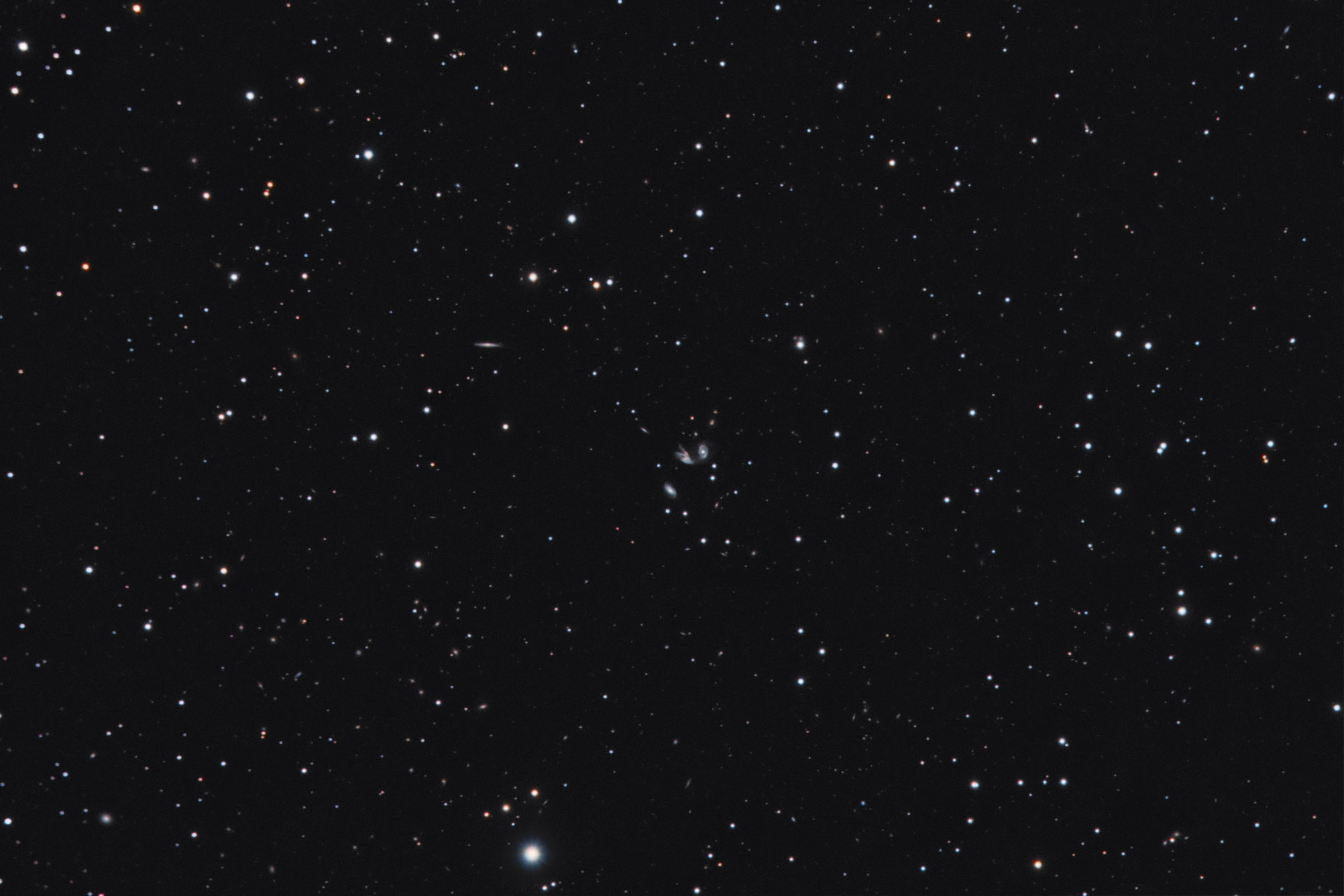