This field is in Andromeda less than a degree southeast of the far more famous NGC 891. CGCG 538-059/PGC 9101 is one Arp missed for his category spiral galaxies with a low surface brightness galaxy on an arm. Like many Arp put in this category the companion has no redshift data. In this case, the field is very poorly cataloged so it isn\'t even listed. While it appears likely it is a true companion I can\'t verify it. It is a very blue galaxy that could indicate interaction. The main galaxy has one cut off arm and one long one apparently drawn out by the companion. I moved it to the upper right of the image to pick up as much of the WBL 071 galaxy cluster as possible.

WBL 071 is a part of the much larger Abell 0347 galaxy cluster. The center of the Abell cluster is a few minutes south of the bottom edge of my image. It is listed as having a diameter of 863 minutes or 14.4 degrees! That can\'t be right. Abell lists no diameter in his catalog. 86.3 minutes would be reasonable but is it right? It is listed as Richness Class 0 which is the smallest class in number of galaxies with 30 to 49 galaxies. WBL 071 is listed with 18 galaxies with no size. It is centered a bit NE of NGC 906. NGC 911 is listed as a member of the WBL 071 group. NGC 898 is not listed as being a member of either group.

In the upper left corner is an odd grouping of galaxies. It appears to be a cluster of apparently very distant galaxies around a large elliptical. Oddly the entire group seems the same orange color as if some paintbrush was used to color that part of my image with the same color. While 7 of the galaxies are in NED none have a redshift. Is the color due to some dust cloud between the group and us or is the group distant enough that this is due to general dust and gas extinction? All of these that NED lists are from the 2MASS catalog so are dusty galaxies emitting a lot of IR light. Wish I knew more about this group.

The annotated image lists what few galaxies NED had redshift distance data. Since room wasn\'t a problem I listed them by catalog name, classification and distance in billions of light-years. Oddly this turned up two apparent mistakes. CGCG 538-060 classed as E/U is an obvious spiral rather than an elliptical. Anyone know what the /U means. It\'s new to me nor did I turn up anything on it as a classification. The other error involves CGCG 538-059 which was my main target! NED classes it as SB, that is a barred spiral. I see no hint of a bar and the arms deserve at least a \"b\" rating. That is what a note at NED says. It classes it as Sb. Probably just a capitalization error at NED. 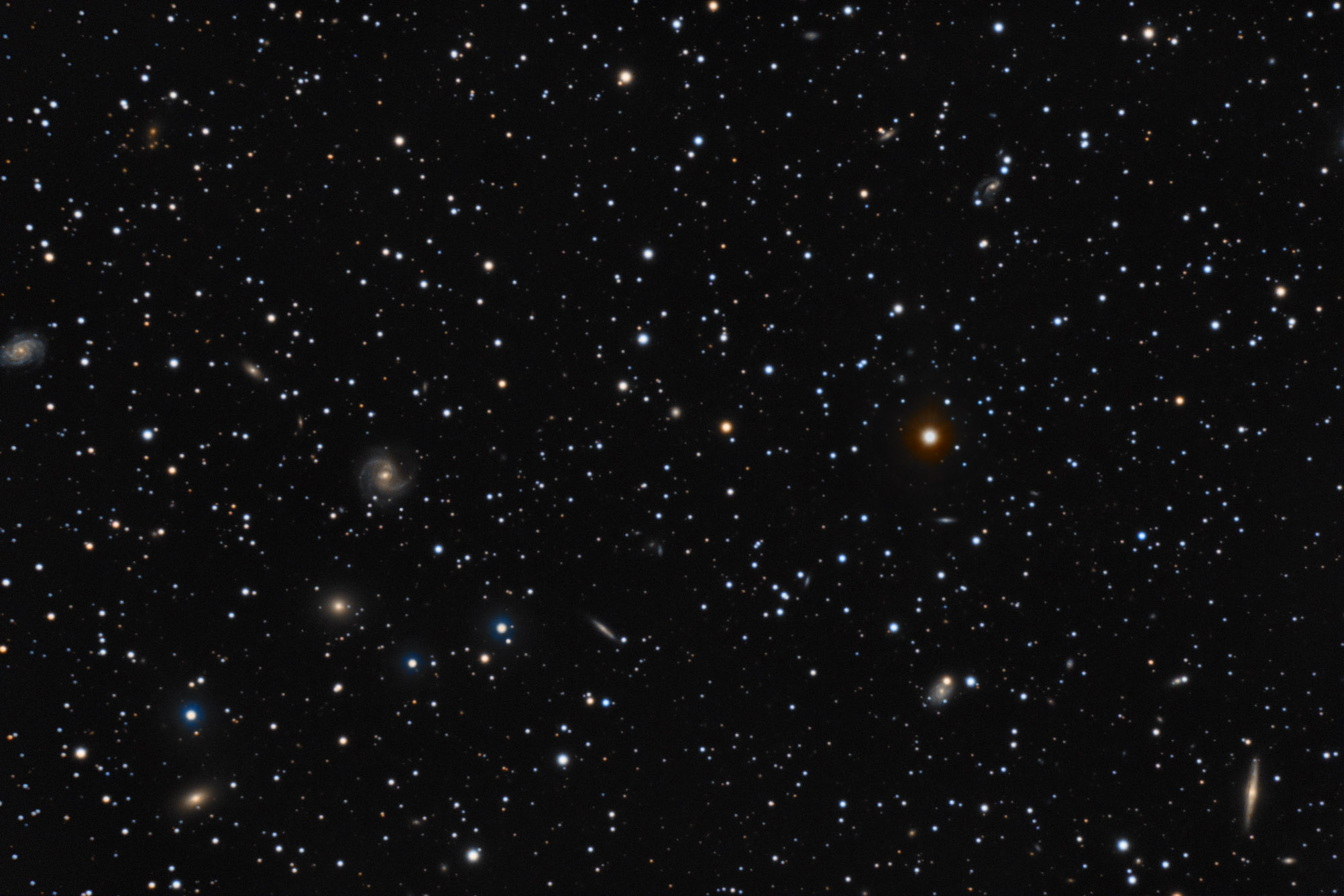 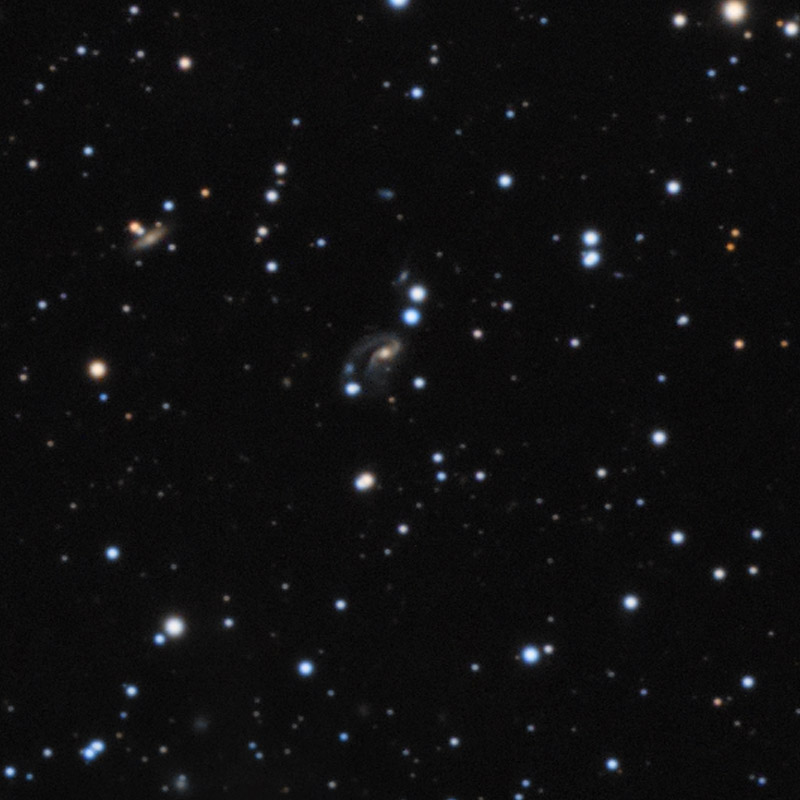 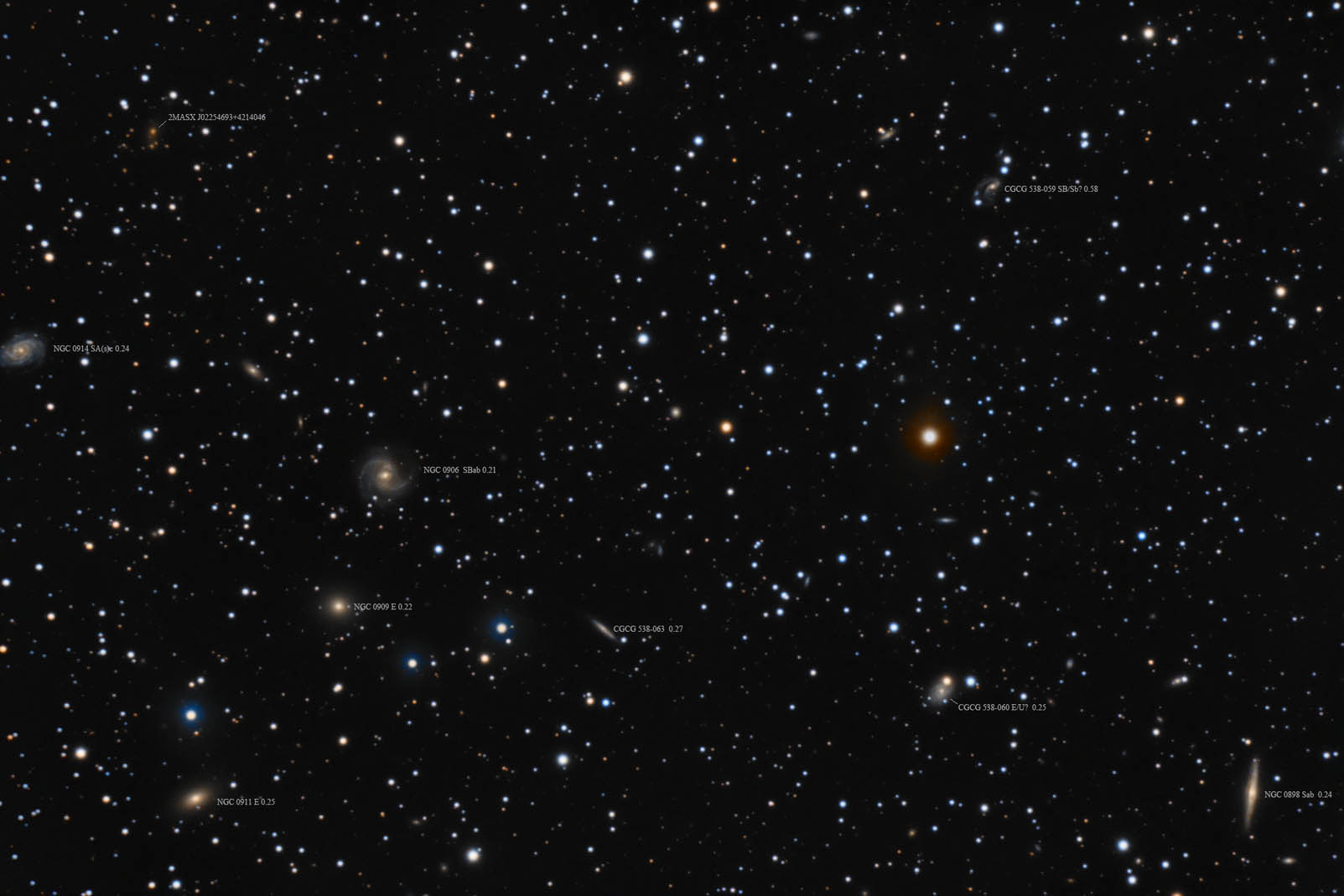