WBL 130 is a three galaxy group in the southeast corner of Lynx. NED lists it as being about 270 million light-years away and consisting of three galaxies. But what three? It would seem easy, the three obvious ones in my image. Problem is one of the three is a background galaxy. Redshift shows the lower left one, UGC 03679, to be an Sa galaxy that is 270 million light-years away. So far so good. The middle galaxy is CGCG 205-017, an Sb spiral at 267 million light-years. So that fits. But the upper right galaxy, UGC 03673, a SABcd spiral, is listed with a redshift that puts it 687 million light-years away. It is 2.5 times more distant yet only slightly smaller in angular size so must be about 2 times larger. So where is the third member of the group? Maybe this is it. The WBL catalog is labeled as being a catalog of nearby, poor, galaxy groups. It doesn\'t record distance so that was provided by NED from some other source. Nor does it list a diameter for the group. So it may be that it just records apparent groups whether they are all members of the same local group or not. But then we come to the flat galaxy at the bottom of my image. It is FGC 598, an Sd spiral that has a redshift that puts it 272 million light-years away. So it certainly is related to the lower two galaxies above. Also, NED lists a note about it under those two galaxies as well as under FGC 598. So that points to it being the third member. Are any of the other galaxies in the image also at about 270 million light-years? Darned if I know. These are the only 4 galaxies in the image on which NED has any redshift data. The few others it lists are all from the 2MASS survey and don\'t even include magnitude estimates since the survey isn\'t at visual light frequencies but those sort of between IR and radio.

UGC 3679 has a nice dark lane that is unsymmetrical and warped. It seems to have a very faint blue halo of stars about it. Are these due to interaction? Maybe just the result of eating a few dwarf galaxies that got too close. I measure it at about 64 arc seconds across which makes it almost 85,000 light-years across. A quite respectable spiral galaxy. CGCG 205-017 is nearly as large at about 82,000 light years in my image. FGC 598 is a bit smaller at about 60 million lightyears end to end. This leaves distant UGC 03673. I measure it at 50\" across, which at 687 million light-years makes it huge at 166,000 light years in diameter. A very large spiral indeed.

Sharp-eyed viewers might notice what appears to be a short linear asteroid trail in the lower right quadrant. At first, I thought it short due to it being taken over several nights (see below) but it shows clearly in all luminance frames taken over those three nights at exactly the same location! It also appears in the POSS plates. It must be yet another very flat galaxy but one that is very small with a sharp edge. Hard to imagine one that could look this way. I looked in vain for a higher resolution image of the object but found none. It\'s at 7h 6m 23.4s +44d 42\' 8\" for those who want to hunt further. It didn\'t make NED\'s short list of galaxies in the field so is anonymous as far as I can determine.

The color is a bit suspect in this image. I took the data over three nights, all of which had cloud issues. I took about 30 frames, most color frames but seeing was highly variable as well as transparency. I ended up using the best 4 luminance frames and best 2 color frames out of the bunch for each color. Adding any more seemed to reduce the quality of the image. Using these ten seemed to give the best final results. But the blue channel suffered compared to the other two colors. I had to wing it to compensate for this. So I\'m not at all confident the color is right, just the best I can do with the data on hand. If the area was more interesting I\'d reshoot all frames as even the luminance channel was hurt by the bad transparency and doesn\'t begin to go as deep as I usually do. 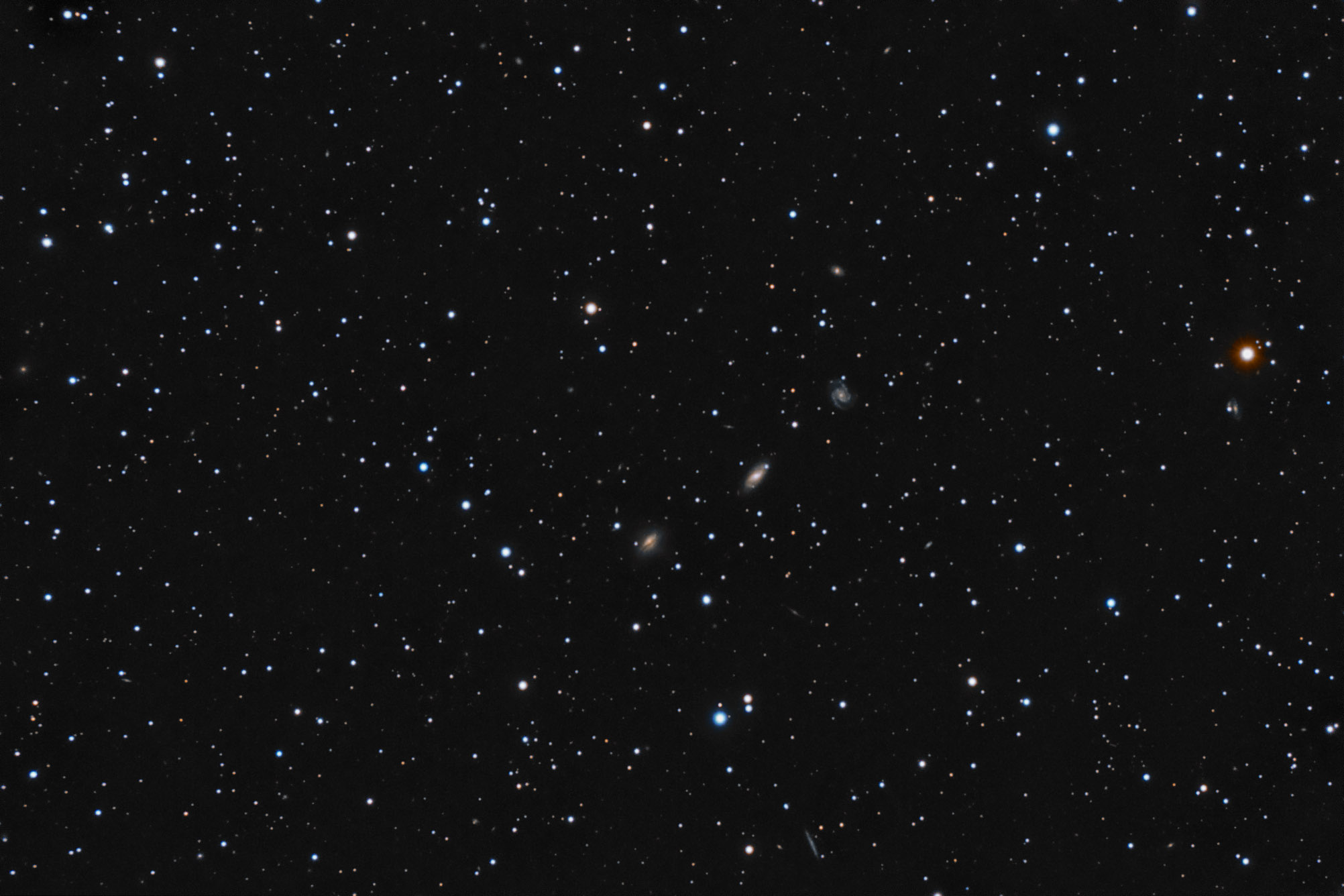